With NSW now seemingly on the hot road to legalising suicide in 2021 with an Act of the NSW Parliament, via a private member's bill, it's now opportune to discuss suicide as no others do so, who do so with their cowardice: with their politically correct rubbish if they're laity, with their fake pastorally sensitive rubbish if they're fake clerics.

But legislators have NO authority whatsoever to countermand the Law of God. Those who think otherwise risk becoming instant lucifers unknowingly on earth, and knowingly much worse when they land in Hell.

God, in His fifth Commandment, has long commanded all humanity:

"Thou shalt not kill."

Suicide is a kill of oneself.

"Woe to those who decree iniquitous decrees, and the writers who keep writing oppression..."  [Isaiah 10.1]

The Bible has a clear and unequivocal warning for those who do evil or who foolishly think that they can escape divine punishment, for Isaiah has said:

"Woe to those who call evil good and good evil, who put darkness for light, and light for darkness, who put bitter for sweet, and sweet for bitter!"  (Isaiah 5.20)

"But woe to those who cause God to be silent." e.g. all those who are conspiring to drive out, or who have surreptitiously driven out, Christianity from the 'Public Square.' As I've been driven out, but not yet entirely.

Woe seems to mean going to Hell, to be roasted alive therein for all endless eternity. Some people don't really care if they go to Hell - while they're still in the safety of not yet being in Hell.

With Satanism advancing everywhere, relentlessly, accompanied by the rising tide of people killing, or wanting to kill themselves, it's now right and proper to repeat what Jesus has to say about those who commit the crime of suicide, the homicide that carries with it, instant eternal punishment, although there are some exceptions in relation to some children.

No one has the right to kill anyone, for whatever reason. Only Jesus Christ, Truth, Order, is:

'... the Master of life and death, of health and sickness.'

Pursuant to the Dictation that Jesus gave to holy mystic and 'victim soul,' Maria Valtorta - the "pen of Jesus:"

"Be careful, because the soul can die [become damned through mortal sin] before the body and you may unknowingly carry around a putrid soul. The dying of a soul is so imperceptible! Like the death of a flower. Not a cry, not a convulsion... it inclines its flame like a tired corolla, and goes out. Later, sometimes after a long time, sometimes immediately after, the body realises it is carrying a verminous corpse [dead damned soul] within itself, it becomes mad with fear and commits suicide to avoid such union... Oh! it does not avoid it! [Because then] It falls on to a swarm of snakes in Gehenna [in Hell] with its very verminous soul."

"He who is guilty [i.e. a sinner], sees shadows of fear in everything [= paranoia, a so-called putatively mental illness, called so by charlatans in medical gowns: satanic psychiatrists]. It is his conscience that creates them. Then Satan instigates such shadows, which might still bring a heart [i.e. a guilty, sinful man] to repent, and turns them [shadows of fear] into horrible ghosts that lead to despair. And despair leads to the last crime: suicide."

"This is the Voice of the Teacher [Jesus]. It roars and caresses. It roars when It is addressed to those who do not want to be converted. It caresses when It speaks to those who, though imperfect, have 'good will' to find God and His Word [Jesus] and, having found Them, to sanctify themselves. For these It becomes the caresses of a Friend and the blessing of Jesus."

"Good will is the desire for Good and Truth."

In Bethlehem, Judah, the angels, in glory, had announced to the 12 Jewish shepherds the birth of Jesus Christ, additionally with the following words, sung in angelic harmony:

"Glory to God in the highest, and peace on earth to men of good will."  [Latin Vulgate version of the Bible.]

Today, 'good will' on earth is fast contracting, and the world has now become sinful, abominable, similar to what Sodom and Gomorrah once were. Both cities were utterly destroyed by God for their abominable sins. And both cities now lie at the bottom of the Dead Sea in (traditional) Palestine, never to rise again.

Fake news is abominable anti-good will, as is also voter fraud as it allegedly happened in the 2020 US presidential election, and elsewhere. The massive evidence of voter fraud was seemingly unlawfully ignored by the US courts and by the fake news people. These issues will probably haunt and destabilise US politics in the years ahead. It seems as if the 'Rubicon' had been crossed.

US and other courts should beware what Jesus has said about judges:

"Only One is the Judge: God.  And if the justice of men has created its law-courts, the task of administering justice is to be remitted to them, and woe to those who profane that name and judge instigated by their own passions or pressed by human powers."

In order to live on earth, a man, Jesus has said, needs only three essentials:

"Woe to those who decree iniquitous decrees, and the writers who keep writing oppression... ", said real Jewish prophet, Isaiah.  [Isaiah 10.1]

Saint John says to us:

"Let those who blaspheme by saying that Christ was not true God and true Man cease to blaspheme out of mercy on their souls."  [Implicit punishment not revealed.]

Mary, Help of Christians, pray for us.

The foregoing is pursuant to the Gospel that Jesus dictated to Maria Valtorta, the Holy Bible, and my analysis.

All for the glory of Jesus our Lord God and Master.

On 16 June 1950, appearing to Maria Valtorta in the glory of Heaven as the Almighty King of Tremendous Majesty - King of kings, Lord of lords - Jesus revealed to us that He had cursed those in the clergy who had opposed the Gospel that He dictated to Maria Valtorta.

I think that such opposing culprit priests, and perhaps some others, may have contributed to the current corona virus divine chastisement. As an example of a past divine chastisement: 33 years after the murder of Jesus by crucifixion, in 66 A.D., Jewish riots broke out in Caesarea and in Jerusalem, that eventually culminated, in 70 A.D., in Jerusalem and its famous Jewish Temple being utterly destroyed (via the hands of the Romans) as a divine chastisement - because the people and the then clergy opposed the Gospel that Jesus dictated to them.

In the past, vaccines usually took many years to research, develop, and test, but not so today as a result of today's slurring wayward drunkards, of governments, meddling in medicine, by dangling enormous amounts of money in front of anyone producing an alleged vaccine against the corona virus plague, a divine chastisement that's the 'elephant in the room' that most people do not want to see or acknowledge.

The risk, of course, is that something unknowable may happen in the future. A past example is thalidomide.

And now, there seems to be at least two strains of the corona virus. Calling it covid is stupid.

So far as I've been able to ascertain, the medicos have not yet established whether the real problem lies in the deleterious potency of the corona virus itself, or in the weak or weakened immune system of an infected person. If the latter, then the question of what factors caused such a weakened immune system, remains unanswered. The medical researchers are much too busy chasing... money, money, money... from intoxicated gullible governments.

Some infirmities, though, are incurable because they have their origin in the supernatural.  [Luke 13.16]

Too many governments around the world have become increasingly tyrannical, using the corona virus plague as the pretext for allowing their police to become practising criminals with impunity: brutal gangsters with police badgers, guns, jails, and with secret uncontested legal proceedings and resultant secret court orders. But laws allowing these injustices are already in place in order to allow secret court/tribunal orders.

I have not worn a face mask during the corona virus plague since it seemingly began in about September-October 2019.

>From 4 January 2021, though, I will effectively be forced to wear a face mask otherwise I'll be starved to death by being prohibited from entering a food store to buy food and drink to live. Monstrous!!

But I will NOT be taking any vaccines derived from aborted babies, unless some medical devils may force them upon me with physical violence against my wishes. They would call this:

Reducing, or taking away freedom, is satanic.

God has created man to be free, but subject to the Ten Commandments.

Poland is presently the leading light in pushing back against restrictions on freedoms. By legislation, Big Tech - social media companies in Poland - in the not too distant future, will face stiff fines if they censor legal speech.

Big Tech have, to date, arrogated to themselves the right to be gatekeepers - because they can put a few lines of computer code together.

At the time of writing, only Poland and Hungary are confronting the anti-Christian hordes (in the European Parliament and in its bureaucracy in Brussels).

The following internet link will take you to what appears to be a free movie on the internet, and shows how a virus, that escaped from an experimental lab, causing a plague, was dealt with - "The Cassandra Crossing (1976):

I can't recall anything being said in the most holy Bible concerning Mary of Kerioth, the mother of traitor and debauchee Judas Iscariot. But t 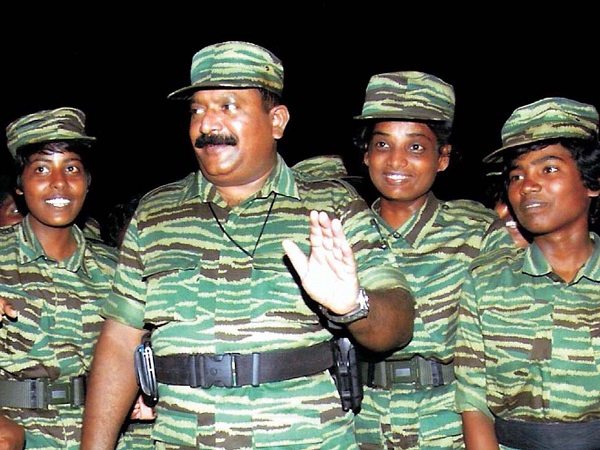 ‘Fierce Tigresses’ or Cogs in the Wheel? An Examination of LTTE Female Suicide Terrorism. EFSAS Article

Introduction: On 21 May 1991, former Indian Prime Minister Rajiv Gandhi was attending a campaign meeting in the southern town of Sriperumbudu 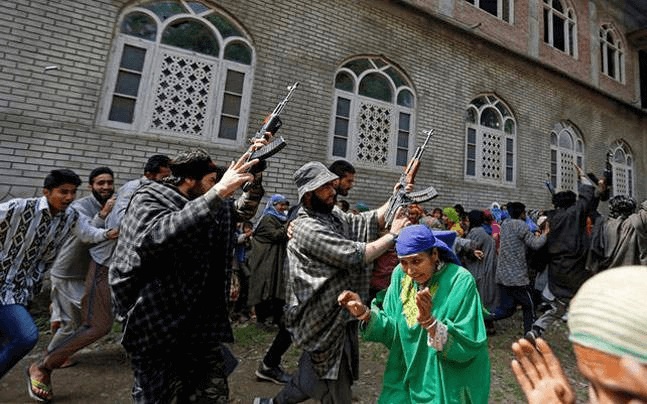 A brief overview of the changing contours of Terrorism in Jammu & Kashmir: EFSAS Study Papers

Introduction: On 24 February 2019, a vehicle-borne improvised explosive device attack in the Pulwama district of Indian Administered Jammu and Kash