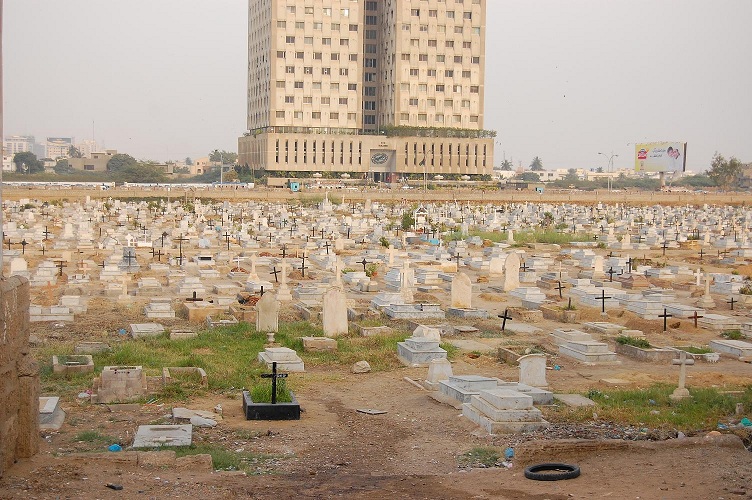 The Gora Qabristan, a more than centaury old Christian cemetery invites attention of Karachi Cantonment Board, Karachi Metropolitan Corporation, British High Commission and Karachi Dioceses Cemetery Board to adopt necessary measures to prevent vandalism and desecration of graves. The damaged boundary walls defected pumping system to drain rainy water makes a lake view of this graveyard where hundreds of foreigners and Pakistani nationals are buried. To respect who died in Christ is to respect their tombs and graves but tombstones are not safe in this graveyard when there is only one guard who is usually threatened by adjacent Muslim residents who prefer to make a way to Shahrah-e-Faisal through graves. Here is history of this graveyard which is enough to declare it a historical place of Karachi City. The year of the original consecration of the Karachi Christian Cemetery in Abyssinia Lines is 1845 but there is a tombstone set in the wall near the main gate of the cemetery bearing the inscription: SACRED To the Memory of MARIA COTTON The Beloved Daughter Of Lieut. Colonel & Mrs. Cotton Of H.M. 28 Regiment Who departed this life On the 13 of October 1843 Aged 18 years. This inscription is typical of many to be seen in the old part of the cemetery which lies on either side of the main gate facing the road to the Air Port. The majority of the graves are of young soldiers, young women and children, bearing witness to the toll taken by tropical diseases in those days. Examination of the walls and old plans go to show that the cemetery must have originally occupied an area of about 10 acres but this has been extended from time to time and now measures some 21 acres. Up to World War II there were virtually no buildings between Napier Barracks and Drigh Road Cantonment and the cemetery was in the open desert. It was surrounded by low walls and served by a water supply direct from the Curry Reservoir about ½ a mile away to the north. There were numerous trees and the whole area was kept reasonably clean and tidy. A small income was derived from burial fees, grave maintenance fees and monument fees supplemented by grants from the Imperial Government in New Delhi. Many of the graves were endowed in perpetuity and this money was retained in Delhi on interest towards the maintenance of the endowed monuments. This was how the Christian Cemeteries all over India were maintained, the actual work and maintenance being done by the Public Works Department. After Partition in 1947, the population of Karachi rose rapidly from some three hundred and fifty thousand to two million and the neighborhood of the cemetery was flooded with refugees. The low boundary walls were broken down, and the whole cemetery became a highway. Monuments were smashed, from railings and lead lettering stolen, many trees cut down, and where they still remained, the area became a vast jungle. As regards maintenance, the control from Delhi ceased to exist, and due to exchange regulations between India and Pakistan, it was no longer possible to transfer funds and endowment monies, and the interest thereon. In the meanwhile, the small income from burials, etc., was quite inadequate to cope with the maintenance work and supervision necessary. In order to maintain the cemeteries therefore, the British High Commission in Karachi invited the members of the various Christian bodies to form the Karachi, Sind and Baluchistan Cemeteries Board, and in due course this organization delegated the actual maintenance of the cemeteries to junior bodies, of which the Karachi Christian Cemeteries Board is one. Meantime conditions in all cemeteries were deteriorating, and in the case of the Karachi Christian Cemeteries Board it was decided to launch appeals to the churches, embassies, commercial firms, and the general Christian public for funds to enable major repairs to be carried out. The responses have been generous and the Board has been able to do considerable repair work including raising the height of the boundary wall which is nearly a mile long, and employing a regular supervisor living on the premises. The result is that the cemetery is kept generally free from trespassers and is cleaned regularly - a formidable task for an area of 21 acres - but unfortunately a refugee village on the west side makes it well nigh impossible to keep the adjacent plot clean. Progress is however being made both in works and in funds. All the endowment monies pertaining to the cemeteries in West Pakistan have now been transferred to the British High Commission in Karachi, and the interest is being parceled out among the various cemeteries and has enabled the Board to carry out extensive repairs to endowed monuments.