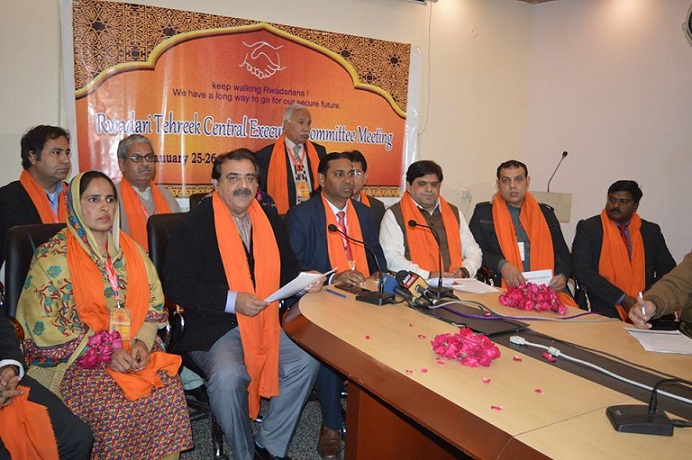 Lahore: January 27, 2017. (PCP) Rwadari Tehreek Central Executive Committee (CEC) held its Annual Meeting on January 25-26, 2017 at Lahore which was chaired by Samson Salamat, the Chairman of Rwadari Tehreek and was participated by the 20 members of the Committee from Sindh, Khyber Pakhtunkhwa, Punjab and Baluchistan including Deedar Ahmed Mirani (Vice Chairman), Abdullah Malik (President), Umar Farooq (Secretary General), Rashid Bashir Chatha (Senior Vice President), Umme Kalsoom (Vice President), Asmat Sabira (President Punjab) and Rauf Paras Dayo (President Sindh) and other honorable members. 2 days CEC meeting was held to review the current socio-political situation of the country, especially the prevailing situation with regard to the growing level of intolerance, violent extremism and terrorism in the society and issues related to the protection of the rights of marginalized communities, especially the religious minorities. The CEC also worked and finalized the Action Plan at the end of its meeting for the Year 2017 for the eradication of hate speech, discrimination and intolerance on the basis religion and violent extremism and for promoting pluralism, respect of diversity and interfaith harmony in the society. The members of CEC welcomed the action of PEMRA against Dr. Amir Liaqat Hussain in which the Anchorperson Amir Liaqat Hussain was continuously instigating for violence. CEC demanded that the ban on hate speech should be implemented in letter and spirit and all those found in spreading hate speech through print or electronic media or through loud speakers should be apprehended. Moreover, the syllabus of the educational institutions needs to be thoroughly checked and the material which spreads hatred on religious, sectarian or any other basis should be eliminated from the curriculum. CEC noted that even after two years to the National Action Plan, the leaders and activists of the banned terrorist outfits are openly holding rallies, meetings and other activities which are threat to the lives of people as they are involved in hate speech on the basis of sect and religion which is a matter of grave concern. Therefore, the CEC called upon the government to come out of the question of "Good or Bad" and take indiscriminate action against the individuals or the groups who are involved in terrorist activities and are killing people in the name of religion or sect. CEC also demanded an action on Justice Qazi Faiz Essa Commission Report on Quetta incident and those who are held responsible in the Commission's report should be apprehended and brought to justice. CEC during the meeting also expressed concerns over the shrinking space for civil society and threat to the lives of those working for human rights and fundamental freedoms and demanded that the issue of the life, liberty and security of every citizens, particularly of human rights defenders should be protected. CEC in particular drew the attention of the Government on the rights of the marginalized communities including religions minorities, women, children and transgenders and demanded proper policies and strategies for the protection and promotion of their rights. CEC also demanded an attention of the Government to address the grievances of the small provinces and solve the issues related to the fair distribution of resources. Members of the Central Executive Committee of Rwadari Tehreek at the end of the meeting once again pledged to continue their struggle across Pakistan to undo the culture of hatred, violence and extremism. Rwadari Tehreek (Movement for Pluralism) is a non-violent social movement which began in 2015 in Pakistan and aims to generate a debate on the importance of religious tolerance and respect of diversity in a multi-religious society and to remind the government, political forces, state institutions and other stake-holders their responsibilities to seriously address trends of hatred, violent extremism and intolerance in the society which has created an atmosphere of fear among the citizens and have riddled the public life, particularly of those belonging to religious minorities. Members of Rwadari Tehreek belong to different faiths and segments of the society including students, teachers, social and political activists, religious scholars and leaders, journalists, lawyers, doctors, and artists and contribute their time and energy in promoting the aims and objectives of Rwadari Tehreek on voluntarily basis. Rwadari Tehreek is a joint initiative of civil society groups and like-minded individuals who believe on pluralism, respect of diversity, human rights and fundamental freedoms and envision for making Pakistan a peaceful society for everyone without any discrimination. Approximately 500 civil society groups are part of Rwadari Tehreek while the individual membership is gone above 15,000 and there are thousands who follow and support the Rwadari Tehreek unannounced. Rwadari Tehreek has been structured at Central, Provincial and at District Levels while office bearers have been elected at each tier.