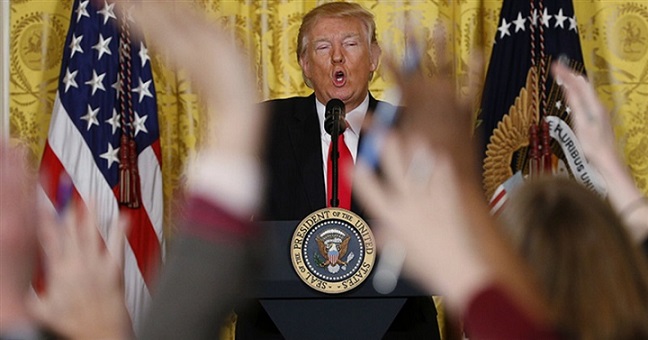 Washington DC: April 28, 2017. (RNS and USA Today) Dozens of Republican lawmakers are asking President Trump to scale back Obama-era protections for gays and lesbians in order to make good on a campaign promise to protect religious liberty. In early February, Trump was reportedly considering an executive order that would reverse former President Obama’s orders prohibiting discrimination against gays and lesbians in the federal workforce or by federal contractors. But the order was never signed. A group of 51 members of the House wrote to Trump this month to “request that you sign the draft executive order on religious liberty, as reported by numerous outlets on February 2, 2017, in order to protect millions of Americans whose religious freedom has been attacked or threatened over the last eight years.” The letter has not been publicly released but was obtained by USA Today. In February, the White House said Trump had no plans to sign such an order: “The executive order signed in 2014, which protects employees from anti-LGBTQ workplace discrimination while working for federal contractors, will remain intact at the direction of President Donald J. Trump.” On Monday, a senior White House official said that some sort of policy to protect religious liberty is still in the works but that the president is trying to find middle ground. The official did not want to publicly discuss a policy that is still under development. The official said Trump has been clear about his support for the LGBTQ community — including after the shooting at a gay nightclub in Orlando, Fla., and again during the Republican National Convention — and does not support any kind of discrimination. But Trump also believes there should be policies that allow for people to express and maintain their strongly held religious beliefs, the official said. The official acknowledged it would be a delicate balance and said discussions were ongoing about how best to proceed. Beyond the workforce provisions, the widely circulated draft order would have eliminated the contraceptive mandate that requires religious institutions to provide health insurance for birth control. Republicans lawmakers are also pushing for the order to allow doctors to refuse on religious grounds to perform abortions, and the lawmakers also want to see protections for religious nonprofits to be able to express political opinions without losing their tax-exempt status. Rep. Warren Davidson, R-Ohio, led the charge on the April letter. He said it makes no sense to defend the Obama executive order or other policies that Davidson believes cause undue stress to people who are trying to practice their faith. Davidson brought up Catholic Charities, an organization that facilitates adoptions and foster care but will not adopt out to same-sex families. Branches of the organization have had trouble with licensing because they will only adopt out to married heterosexual couples. “Fundamentally, to Christians, you can’t say, ‘We’re going to protect your First Amendment rights and be the way they’ve always been.’ But now, to the Catholic Church: ‘If you want to place a baby for adoption you have to also place them with same-sex couples’ and the church says, ‘That’s an affront to our doctrine.’ You can’t have it both ways,” he said. Davidson said Democrats should also be able to support religious liberty protections.“It strikes me that broadly, in general, progressives have been pretty welcoming to Muslims and have been very upset with the president and his tone with Muslims. I think this could be something that could be seen as a way to reach out and say, ‘No, the First Amendment applies to everyone in America,’” Davidson said. The letter’s signatories, all men except for Missouri Rep. Vicky Hartzler, include some of the Republican caucus’s most conservative members. A similar letter was sent by Senate Republicans earlier this month. “An executive order requiring federal government agencies to protect the right to religious freedom is necessary, and directing agencies to adhere to existing federal laws protecting religious freedom is sound policy,” the letter reads. But not everyone agrees. Laura Durso of the progressive Center for American Progress said freedom of religion is already protected by the First Amendment and any efforts to get additional protections will create “a license to discriminate across a wide range of federal programs.” “You can’t have it both ways in this administration, as much as they try to say ‘we’re going to be a friend of the LGBT community, but give people the right to discriminate against them,'” said Durso, vice president of the LGBT Research Communications Project at CAP. JoDee Winterhof, senior vice president for policy and political affairs at the Human Rights Campaign, an LGBTQ advocacy organization, said that if Trump went forward with the leaked order it would “allow an unprecedented expansion of taxpayer-funded discrimination.”