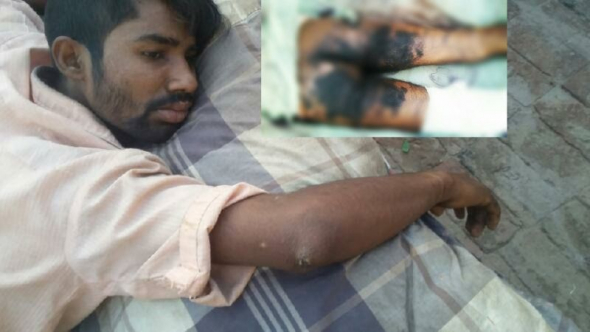 Sheikhupura, Pakistan: April 29, 2017. (PCP) A 21-year-old Christian man was allegedly assaulted and burnt with hot iron rods by the family of a Muslim woman for 'befriending' her in Sheikhupura within Pakistan's Punjab province Ansar Masih first established contact with Jameela Bibi two years ago and their friendship grew over time and blossomed. They often spoke over phone and Masih would also visit the woman's neighbourhood to meet her. When the woman's family learned of the friendship, her father, Manzoor, and her brothers Mangu and Shahbaz called Masih's father asking him to tell his son to stay away from Jameela. The family of Mr Masih were warned of dire consequences that would be taken against the family, if their instructions were not followed. On April 1st 2017, Ansar's mother sent him to collect some money from a friend in Jameela's neighbourhood. Whilst he was riding his motorcycle he was stopped by Manzoor and his sons, who waved their hands at him to stop. When he stopped they grabbed him and covered his head in a small sack and forcibly kidnapped him taking him to their house. Once he was taken to their home the three assailants unclothed Ansar, beat him and burned him using hot iron rods until he was rendered unconscious. The men then allegedly brought Ansar who was still unconscious to his house and told his family that he had met with an accident. Ansar's family rushed him to Sheikhupura's District Headquarters Hospital where after gaining consciousness, he awoke from his unconscious state and described the true nature of the violence that had befell him. Ansar received severe burn wounds which could not be treated at Sheikhupura District Headquarters Hospital. After an appeal for help BPCA intervened and paid for his transport and medical costs for him to be treated at Mayo Hospital, Lahore which had a special burns unit. His sister Samina Bibi (30 years) lodged an FIR at Sheikhupura's Saddar police station after which the police took Manzoor into custody, but are yet to take any action against the two sons. Mother of Ansar, Nasreen Bibi (50 yrs), spoke with British Pakistani Christian Association, She said: "My son's life is precious to me and was almost taken away from me, he has undergone brutality the likes of which I have never seen before. I am still shocked by the violence that he has survived and thank God that he is recovering. "The men that hurt him so bad deserve to be punished and I am praying God will bring justice into this situation as it happens to so many young Christian men." Ansar Masih, said: "I am still traumatised by the attack and am too scared to leave my home. The men hurt me so bad, they kicked, me punched me, bit me, spat at me, hit me with bars and then burnt me after I first watched them heat the poles they had beaten me with in their fireplace. "I was simply a friend of Jameela we did not have any physical affair, but this family simply hate Christians and have enacted such brutality on me because to them I am just like rubbish." "I lost consciousness during the burning and then found myself in hospital. I am still in pain and will be scarred for life but at least I am alive. God preserved my life and I will stay forever indebted to him." Wilson Chowdhry, Chairman of the British Pakistani Christian Association, said: "The animosity that Muslims in Pakistan feel for Christians shows no signs of changing. No amount of interfaith harmony projects in Pakistan will alter the longstanding pariah status of Christians, in the short term. "If Christians are to survive in Pakistan there is no option to the Government of Pakistan but ensure laws that are in place to counteract the hostility are enacted. "If this Muslim family is able to bribe themselves out of being convicted this will only serve to be a blight on the already poor image of Pakistan across the globe."