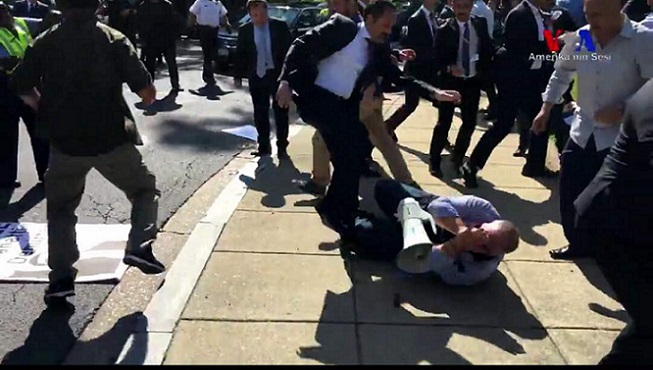 Washington, DC: May 17, 2017. (PCP) On May 16, pro-Erdogan forces and members of his security detail rushed a police line at a peaceful demonstration and brutally beat Kurdish, Armenian, Greek, Assyrian, and Yezidi human rights protesters in front of the Turkish Ambassador's residence in Washington, D.C. IDC stands with our strategic partner, the Armenian National Committee of America (ANCA), and the other groups that took part in the peaceful protest. IDC’s Executive Director Philippe Nassif commented: " In our country, in our capital, Turkish Erdogan supporters attacked our friends and allies at a peaceful demonstration. It is atrocious that foreign agents assault women and men on American soil, and demonstrates the unhinged and anti-democratic nature of Turkeys government, long known to our communities as one of the greatest human rights violators in human history." Nassif is asking IDC supporters “not to stand silent and to Contact their local representative now and demand justice for the 1.5 million killed during the genocide." "Civilized nations and peoples condemn this behavior. There is no place for it in the capital of the free world", adds IDC Vice President and Senior Policy Adviser Andrew Doran. In Defense of Christians calls upon the United States, its allies, and NATO to scrutinize every aspect of America's dealings with Turkey. In particular, American leaders should examine Turkey's role in accommodating U.S.-designated terrorist organizations, including Al Qaeda and affiliates, since the beginning of the Syrian Civil War, and their denial of the genocide of 1.5 million Armenians, Greeks, Assyrians, Maronites, Yezidis, and other minorities from 1915-1923.