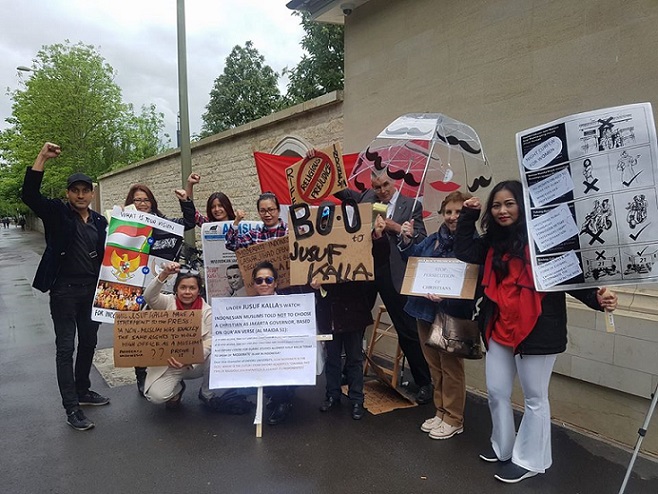 London: May 20, 2017. (PCP) People of good conscience gathered outside the Oxford Centre for Islamic Studies at 2pm, 18th May 2017 to vent their frustration at an invite for the Indonesian vice-president Jusuf Kalla to deliver a lecture on 'Moderate Islam'. The protest against Islamic extremism comes just a day after Prince Charles delivered a speech at the inauguration of the new home for the centre, appealing for better 'cultural connectivity' in society and praising the centre's goals of 'dialogue, understanding and connection'. The peaceful demonstration which consisted of Indonesian Christians and Buddhists was jointly organised by the British Pakistani Christian Association after a request for help from Indonesian Christian Mariella Djorghi who learned about the scheduled talk. Joined by campaign group Christian Voice protesters aimed at highlighting the ongoing persecution of minorities in Indonesia. In particular, the 2-year sentence imposed on the Christian former Governor of Jakarta, Basuki 'Ahok' Tjahaja Purnama, on blasphemy charges. During the demonstration eight security men from the Indonesian Embassy could be seen taking photographs of the protesters. The Indonesian members believe this action was designed to intimidate them stating that the cruel Government of Indonesia is known for brutality towards dissenters. Mariella Djorghi, a Catholic from Indonesia and a trained lawyer who helped organise the protest, said: "My main point is to ask questions to Jusuf Kalla – how he would envisage a moderate Islam in Indonesia. Because at the moment what we have seen is a Christian governor who has lost a re-election because Muslims went onto the streets with placards quoting a Koranic verse – al Ma'ida 51.' The verse reads: 'O you who have believed, do not take the Jews and the Christians as allies. They are [in fact] allies of one another. And whoever is an ally to them among you - then indeed, he is [one] of them. Indeed, Allah guides not the wrongdoing people.' Djorghi said: 'Because of that, my belief was that the vote switched. He is a governor who has proven to be highly competent, and he lost to an Islamist who was openly supported by Jusef Kalla, who should have remained neutral.' 'So what message is this sending to non-Muslims like me? It means that you are not welcome in this country. 'I would not be risking standing here being registered by the intelligence of the embassy so I cannot go home, or whatever they might have in store for me, if I did not feel passionately about this. Many people are scared because they have families back home. If you can do that to a governor, you can do anything to anyone else. Why is the governor behind bars and not them? Djorghi added: 'When I found out that Prince Charles was the patron of the Oxford Centre for Islamic Studies, I thought: "Please resign from that post. This is not good news for you." It beggars belief. On the Behest of the BPCA Djorghi, an Indonesian resident from London, has written to Oxford University's Vice-Chancellor Louise Richardson regarding Kalla's invitation,saying that he is not fit to discuss 'moderate Islam'. British Pakistani Christian Association, has also set up a petition. The Association's chairman Wilson Chowdhry said: "I join Mariella and other humanitarians in expressing deep concern for the bias support that the Vice President gave to an Islamist candidate for the Jakarta governorship, for which he was widely criticized. "Under his watch, Indonesian Muslims are told to choose a Muslim over a non-Muslim governor candidate, using the Qur'an, chapter and verse. The result being that not only did the incumbent Chinese Christian governor lose his re-election, but he was also dragged to court, facing spurious allegations of having insulted the Quran verse quoted by the Muslims. "His election loss coupled with his two-year jail sentence for blasphemy shocked the nation and showed a deeply disturbing trend in Indonesia towards religious discrimination." During a Q&A session after Vice President Kalla's lecture a Muslim student questioned him on the validity of Non-Muslims standing for political positions. Mr Kalla chose to focus on the Islamist campaign led by his compatriot Anies Baswedan who defeated Former Governor of Jakarta Basuki Tjahaja Purnama by stirring up religious hatred. In his comments, he compared the campaign to the American elections and the campaign of Donald Trump. Mr Kalla felt that stirring up of hatred based on 'religious similarity' was a valid tool in democracy. Watch video here: In a very disingenuous speech Vice President Kalla spoke of his personal knowledge of Governor Ashok who he found 'Impulsive and high tempered' laying the blame for the blasphemy charges on the former Governor himself. A full transcript of Vice President Kalla's speech can be read by clicking (here) A response back from a spokesperson from Oxford University expressed concern over the imprisonment of Governor Ahok, but explained they have no authority over OCIS. They felt that in the interest of free speech Vice President Kalla should be allowed to speak and tried to provide assurance that an academic would ask challenging questions of Mr Kalla - as if this would provide some solace.