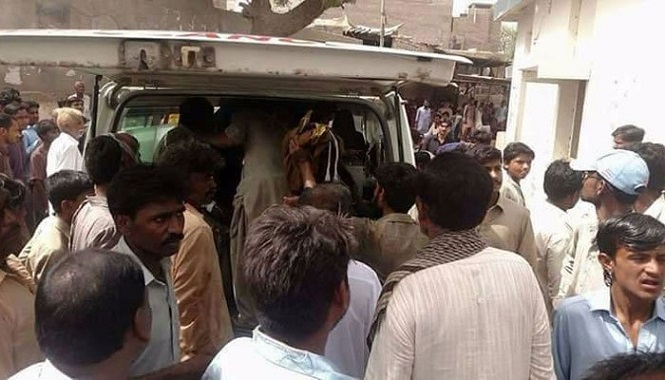 London: June 3, 2017. (PCP) Christian Sewer cleaner Irfan Masih died on June 2nd when a doctor at Umerkot Hospital, Lahore, refused to touch his sludge covered body because he was fasting. Thirty-year-old Masih who fell unconscious while cleaning a drain lost his life after doctors at Civil Hospital Umerkot, refused to treat him until his body was washed. According to Irfan's brother, he fainted when him and his three colleagues stepped down into a manhole at Chhore Road, Umerkot on Friday for a routine inspection. To get medical aid to Irfan his colleagues took him to the nearby Civil Hospital, but doctors told them to wash his body first and then they would begin his treatment. Irfan's family and his colleagues kept imploring and pleading with the hospital staff as Irfan layin a corner of the hospital floor fighting for his life, but Dr Yousuf said he was fasting and he would not touch Irfan's filthy body until it was cleaned. According to his brother, Pervaiz, he had already been resuscitated him to keep him alive and they pleaded with doctors in vain to save his life. Irfan's family believes that he could have survived if timely treatment had been provided to him. They believe that Irfan only died because of the doctor's negligence towards the emergency and lack of facilities at the hospital, while Dr Kunbhar claimed that Irfan Masih had already passed away before arriving at the hospital. Irfan's colleagues and workers at the local municipality and a large number of people from the Christian community in Umerkot took Irfan's body and staged a demonstration outside the local press club, where they protested against the local administration and hospital for wasting the worker's life. Umerkot police, on the complaint of the victim's father, Nazeer Masih, registered an FIR against six suspects, including three doctors. According to latest report police have arrested Medical Superintendent Dr Jaam Kunbhar over the death of irfan Masih, while doctors at the Civil Hospital Umerkot went on strike on Saturday to protest the arrest. Later, Health Director General Dr Akhlaq Khan visited the hospital, where he said that according to hospital records and statements, Irfan's death was not a result of the doctor's negligence. However, the director general believes doctors were at fault to some extent. Irfan's family insisted that he was alive when he was brought to the hospital and that when Dr Yousuf came in the emergency ward looked at them, but went outside. Nasir Saeed Director CLAAS-UK has said that it is sad that Irfan Masih died because of the doctors' negligence and hatred. he said: "A life could have been saved if medical aid had been given in time. This is not the first time that any sewer cleaner has died doing his duty, but I am aware of such several cases in the past too. To stop such further incidents the government should provide safety kits to their workers but since these menial jobs are reserved for the Christians nobody cares about them. The Government must provide safety kits to their workers for such risky jobs which have a record of claiming lives." He further said that a case should also be registered against the responsible officer of the municipality as they are equally responsible for Irfan's death for not providing safety kits. "Although the police have registered a case against some doctors, I don't have much hope that justice will be done to Irfan and his family," Mr Saeed concluded.