Together Stronger: London fights back at extremism 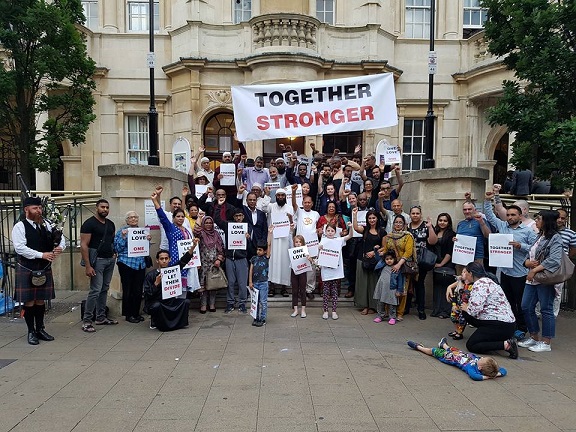 London: June 24, 2017. (PCP) Christians, Muslims, Hindus, Sikhs and other people of faith and no faith came together to stand defiant against the extremism and hatred that has shocked and stunned Londoners over the the last four months. Terrorist attacks at Westminster Bridge, Manchester Arena, London Bridge and Finsbury Park have highlighted an unfortunate increase in polarisation within British society. A public meeting was organised by the British Pakistani Christian Association in the aftermath of the London Bridge Attack, and saw over 30 local people in attendance. Visitors spoke of concern over Police raids in Ilford and several arrests of suspects who may have aided the London Bridge terrorist trio. They explained that news that the former Ummah Gym in Ilford was visited by the three terrorists has created fear and anxiety amongst local people. They feared that those with an extremist ideology may still be at loose in their midst and also that Muslims in the local area may be targeted due to an unwarranted guilt by association. Wilson Shared details of the Police Prevent Strategy Anti Terrorism Hotline:0800 789 321 and also details of Tell MAMA a campaign to tackle rising islamophobia: https://tellmamauk.org/ It was agreed that a multifaith peace vigil would be held in Ilford Town Centre to show a public display of unity and to condemn the brutal attacks that were perpetrated by warped evil minds that used religion as a tool for mindless unwarranted violence. Wilson Chowdhry, Chairman of the British Pakistani Christian Association, said: "It is hard to believe the violence of recent months has occurred in our beautiful city where most people hold very cosmopolitan views. But it has nevertheless and the people of Redbridge have come out fighting and will continue to challenge for improved solidarity. We simply will not be cowed by bullies or extremists." Sheikh Khalid, Imam for the Al Bayan Welfare Centre, Green Lane, said: "To eradicate hate in the world we must show love. Today at this vigil we sent out a clear message that you can have different colours, cultures and faiths but you will still share one common aspect and that is your humanity. If people realised this simple truth we would have a stronger society." Darshan Lal Choda, Chairman of Vishwa Hindu Parishad Temple, Cleveland Road, said: "We condemn all kinds of terrorism and stand united with our brothers and sisters of all faiths. It was not a duty but a pleasure to join with Christian, Muslim, Sikh and other citizens of Redbridge. The thugs who commit these awful killings are not of any faith they are simply warped individuals." Shaheen Zar, leader of Ilford Asian Church, which meets at St Andrews Church, The Drive, said: "The vibrant multifaith and multicultural communities of Redbridge have been living in harmony for so long; nobody can change that. Together we can defy any attempt to shatter our peace by visibly organizing events such as this vigil which promotes social cohesion." During the event visitors heard talks from several Religious leaders including all the above. A message received from the Redbridge Faith Forum, who supported the event and helped promote it. The trustee statement read as follows: "Terrorism and hate crime has no place in our society. "In Redbridge we have an exceptionally diverse community, and we will continue standing together strong and united. Redbridge Faith Forum will continue its work to promote respect, co-operation and understanding in the borough with the support of people of all faiths and those of none. "Redbridge Faith Forum calls for the people of Redbridge to stand together at this difficult time and to continue to be vigilant to work together for peace, compassion, understanding and hope." During the event people linked arms as they held candles and had a 1 minute time of silence during which they were asked to think about the recent attacks and the victims and their families. This was followed by a candlelight vigil were people were encouraged to share a thought that could help open our minds to the benefits of harmony. Several individual's shared testimonies, poems and phrases during a time of soul searching that was extremely uplifting. People linked arms as they shared testimonies, poetry and phrases during a moving time of peaceful reflection. After the 5 minutes time of reflection people gathered on the dias above the front balcony steps of Ilford Town Hall. It was decided as the central base of authority for our community it was extremely symbolic for our shared desire for harmony to be expressed there more then anywhere. As people gathered a bagpiper play a lament for all the lives lost in the recent terror attacks in Britain. After a first lament one by one the participants followed the bagpiper to lay a candle before a wreath of flowers placed on a fore rail of the town hall. The message on the wreath read as follows: "Together we are stronger but the lives taken should never be forgotten but should unite us against hatred."