Archbishop of Lahore hosted Eid Get Together 2017 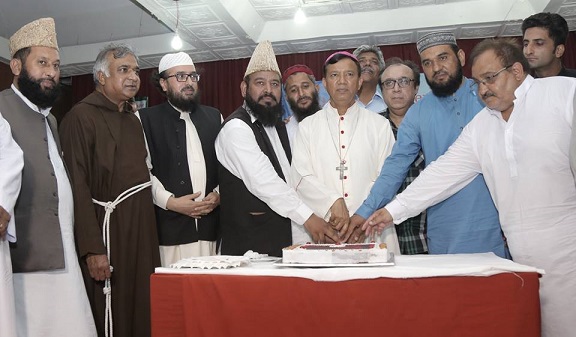 Lahore: July 5, 2017. (PCP) An Eid get together was organized by The National Commission for Interreligious Dialogue (Catholic Bishops’ Conference Pakistan) under the Chairmanship of the Archbishop and the Executive Secretary Fr. Francis Nadeem OFM CAP. This programme was hosted by His Grace Archbishop Sebastian Francis Shaw, Archbishop of Lahore in connection with Eid-ul-Fitr 2017. A large number of dignitaries from different walks of life and religions were present at the programme. A delegate of the Rotary Club Lahore Gardens was also present. Fr. Francis Nadeem OFM CAP, gave a brief introduction of the programme. He said that the purpose of the programme is to bring the followers of different religions closer to one another and share the joys and happiness together in order to cultivate the seed of tolerance, unity and brotherhood. Fr. Ashfaq Anthony OFM Cap read out the message of the Pontifical Council for Interreligious Dialogue (Vatican) for the month of Ramadan and Eid ul Fitr. Special guests of the programme appreciated the efforts of the Commission for the promotion of peace and interfaith harmony in Pakistan. While expressing their views they said that such kind of interfaith gatherings are living examples of social and interreligious fellowship prevailing in the hearts of Pakistani citizens. They also commented that these kinds of gatherings promote aspects of fraternity and unity among the followers of different religions and believers. They emphasized the need to continue such kind of efforts at all levels of the society. His Grace Archbishop Sebastian Francis Shaw; Archbishop of Lahore, congratulated all the Muslim Brethren in the light of the Eid Message from the Pontifical Council. He said that there must be reconciliation among followers of all the religions. He stressed upon the need for tranquility in the society and to live in peace with one another. He requested all the participants to strengthen their family life circle to promote peace and reconciliation in the society, in order to have serenity and tolerance in the country. At the end of the programme Mufti Sayyed Ashiq Hussain thanked and expressed his gratitude to His Grace Archbishop while presenting a buquet on behalf of all the Muslim Community. Fr. Francis Nadeem OFM CAP; Executive Secretary , National Commission for interreligious Dialogue, thanked all the participants and emphasized that prayers for peace should be a part of our daily life.The ceremony ended with a prayer for peace in Pakistan and around the world followed by a cake cutting ceremony. Among the Participants were Allama Asghar Arif Chisti, Mulana Asadullah Farooq, Pir Shafahit Rasool, Qari Muhammad Mansoob Rhahimi, Sabhibzada Muhammad Asim Makhdoom, Pir S Jaffri, Hafiz M. Numan Hameed, Hafiz Mufti Ashiq Hussain, Allama Dr. Badir Munir Mujadadi, Allama Waqar ul Hassan Naqvi, Dr. Amjad Hussain Chisti, Mullana Hafiz Syed Qazim Raza Naqvi, Qari Khalid Mahmood, Syed Farhat Hussain Shah, Al-Haaj Pir Syed Walliullah Shah Bukhari , Allama Nasir Medhi, Allama Muhammad Zubair, Suleman Saddiq , Sohail A Raza, Anwarullah Khan, Shabnam Nagi Rev. Shahid Maraj , Fr. Jehanzeb , Maj. Saleem Yusaf , Rev.Amjad Niamat , Maj. Salamat Mashi, Ashfaq Anthony OFM CAP, Br. Fiaz Rafiq OFM Cap, Fr. Jahanzeb, Anjum Dara, Fahad Shahbaz, Raja Asghar (Engineer), Shahid Ambrose, Muhammad Asad, Mrs. Ishrat Javed, Razia Malik, Sunil John, Shahbaz Akhter, Shakeel Francis, Qamar Danie, Nadeem Anthony (Advocate) and Dr. Saad S. Khan (Deputy Sec. National Commission for Education UNESCO) The members of the Rotary Club Lahore Gardens who also participated were Tahir Yazdani Malik , Haroon Kumar Kundalani, Anumtul Gul and Shanawar Hayat Lashari.