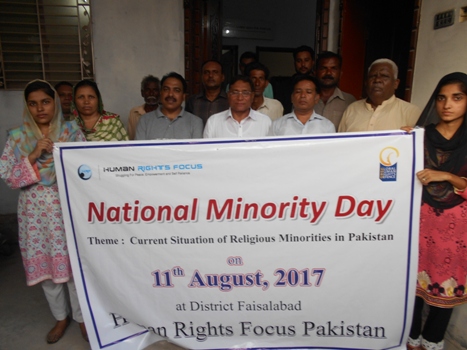 Faisalabad: August 12, 2017. (PCP) Human Rights Focus Pakistan (HRFP) in collaboration with Global Human Rights Defense (GHRD) organized an event on National Minorities Day with special focus on the current situation of religious minorities. Naveed Walter, President Human Rights Focus Pakistan (HRFP) said that the founder of Pakistan’s address at 1st Constitutional Assembly on 11th August 1947 is actually an ideology of the Country which was formed by Muhammad Ali Jinnah and allies. Unfortunately now the fundamental rights of minorities are violated and it has cross all the limits. He highlighted the historical role of minorities in the Movement of Pakistan, Formation of Pakistan and Development of Pakistan. He said, minorities have played this role to gain equal rights in Pakistan, but the past and present situation of religious minorities is very disappointing. He said, HRFP with all minority communities envisioned violence free society for all minorities in the coming future. Naveed Walter also highlighted the issues of Hindus, Sikhs, Ahmdiyya’s, Bhahi’s, Parsi’s and other minorities. He particularly raised the issues of attacks and minority girl’s abductions, forced conversions and force marriages. Naveed Walter appealed to the Government that the time has come, when minorities of Pakistan should be given equal rights and equal opportunities in all spheres of life, otherwise the future of religious minorities in Pakistan is very uncertain. The speakers George Clement (Ex MNA), Manzoor Anthony(HRD), Zafar Iqbal(HRD), Ms Nusrrat Kaleem (HRFP), Sameer Ajmal (Journalist), John Victor (Educationist), Amjad Pervaiz Sahil (Columnist) and others highlighted miseries, violations, attacks, blasphemy allegations, assassinations, discriminations and persecutions which minorities are facing for last so many years in various forms. They awfully said, unfortunately the Pakistan of today is contrary to the Pakistan’s Founders plan. They said Jinnah dreamed of the state where every citizen regardless of his religion, belief & faith will be treated equally in all dimensions of life. They said, we questioned that “Does Jinnah and Minorities dreamed a Pakistan where Churches, Temples and Gurdwara’s are brutally burnt & attacked, where minorities leaders are assassinated, where Christians and Hindus are forcibly converted to Islam and then forcibly married according to Islamic faith, where allegation of 295B/C are fictitiously charged on Minorities on regular basis, where thousands of Hindus Migrated every years due to unsafe and risky conditions. Human Rights Focus Pakistan demands that, • The government should implement the verdict of Mr. Justice Tassadq Hussain Jillani’s verdict of Supreme Court dated 19 June 2014. • The government have to fulfill their promise of dated 24 May 2017 in response of HRFP’s writ petition in Lahore High Court and the text books of academic syllabus should be revised and all negative chapters, contents and references against the minorities should be eliminated that are creating the negative impressions in the minds of new generation against the minorities. • All discriminatory laws against religious minorities especially (295 A/B/C) should be repealed and also the fictitious use of (295A/B/C) should be stopped. Also the victims upon whom allegations are not yet proofed should be released. • In all parts of the country, Government writ and provision of justice & protection should be ensured to the minorities particularly the forcible conversions and Islamic marriage of young minorities’ girls and women should be stopped. • The article 2 of the Constitution of Pakistan must be abolished and the religion should be aparted from state matters. • To provide equal citizenship rights to minorities such practical steps and mechanism should be ensured that will provide easy access to Justice, Restoration and Protection to the minorities. • We gravely demand to Government of Pakistan to make public the investigation reports of inhuman massacres, attacks on places of worships, incidents of intimidation & threats, brutal torture and inhuman killing accrued against the minorities of Pakistan and the perpetrators violating the name of religion must brought before the justice. • In the political process according to the democratic values the Government should give true representation to minorities in pr