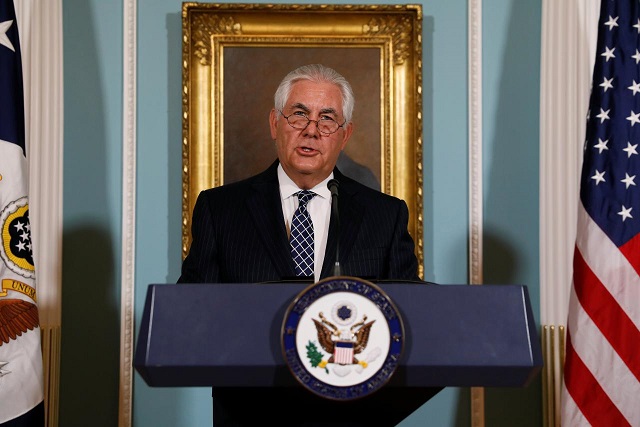 Washington DC: August 17, 2017. US Secretary of State Rex Tillerson alleged on Wednesday that religious freedom was “under attack in Pakistan, where more than two dozen people were on death row or serving a life imprisonment for blasphemy”. Tillerson made the comments at the US State Department while introducing the agency's annual report on religious freedom, required by a 1998 act of Congress. The report is the first to be released during the Trump administration and covers 2016. “It is my hope that the new prime minister Shahid Khaqan Abbasi and his government will promote interfaith harmony and protect the rights of religious minorities,” Tillerson said. In 2016, violence committed by armed sectarian groups connected to outfits banned by the government, as well as abuses by individuals and groups designated as terrorist organisations by the US and other governments continued, the report said. The report also highlighted attacks in India by cow protection groups against people accused of bovine trafficking or having beef in their refrigerators or vehicles. The chapter on India stated that in 2016, “there was an increase in violent incidents by cow protection groups against mostly Muslim victims, including killings, mob violence, assaults and intimidation”. Tillerson said US allies including Saudi Arabia and Bahrain did not uphold principles of religious freedom in 2016, while Daesh has carried out "genocide" against religious minorities. Saudi Arabia, Tillerson said, ought to "embrace greater degrees of religious freedom for all of its citizens." He cited criminal penalties for apostasy, atheism, blasphemy, and insulting the Saudi state's interpretation of Islam, as well as attacks and discrimination targeting minorities. The report said Saudi Arabia has used counter-terrorism laws to target atheists and minority communities. The United States and Saudi Arabia have long been close partners in counter-terrorism efforts and the kingdom was the first stop on US President Donald Trump's maiden international visit. Tillerson singled out another Gulf Arab state, Bahrain, saying it "must stop discriminating against” the minority communities. Bahrain's foreign ministry said Tillerson's remarks were "inappropriate" and showed "a deep misunderstanding of the facts." It called on the State Department to discuss such matters directly with the kingdom before making statements. "The history of the Kingdom of Bahrain is characterized by coexistence and religious harmony," the ministry said in a statement. It said Bahrainis of different sects served as government officials, judges, diplomats and other professions. Tillerson said that in Turkey, a NATO ally, "authorities continued to limit the human rights of members of some religious minority groups." American pastor Andrew Brunson has been jailed in Turkey since October on charges of being part of a terrorist organization, according to news reports. Tillerson said Iran targeted religious minorities and in 2016 executed 20 people on charges including "waging war against God." He also called out China and Sudan in his remarks. The Chinese government tortures and imprisons thousands for practicing their religious beliefs, Tillerson said, citing the targeting of Falun Gong members, Uighur Muslims and Tibetan Buddhists. And in Sudan, the government arrests and intimidates clergy and blocks the construction of churches while tearing down existing ones, he said. Tillerson's decision to introduce the report contrasted with how he handled the State Department's annual human rights report in March. He declined to unveil it in person, breaking with precedent, and drew criticism he was not giving rights issues adequate attention. The report did not address Trump's attempt this year to temporarily suspend refugee admissions and his decision to impose a lower cap on the number of those admissions. The report stated that resettlement is a "vital tool for providing refugees protection." Many refugees admitted to the United States in 2016 were fleeing religious intolerance and persecution, it said.