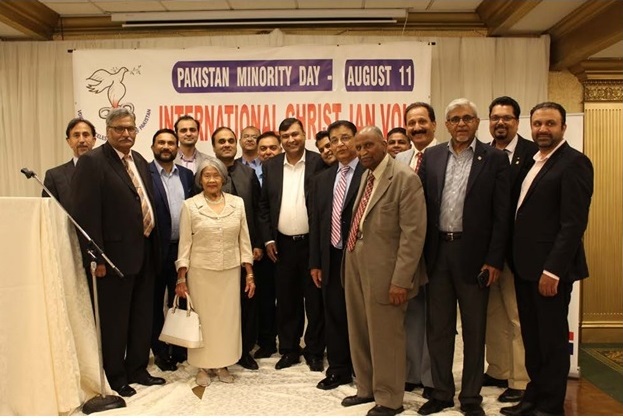 Toronto: August 20, 2017. (PCP) On August 11, 2017, International Christian Voice held its annual Minority Day celebration. Minority Day is celebrated every year to remember and honour the contributions and the sacrifices the religious minorities of Pakistan have made for their land. The celebration commenced with a prayer by Father Joseph from St. Philips Nehri Catholic Church, followed by both the Canadian and Pakistani national anthems. After the singing of the national anthems, Mrs. Eliza Charles, one of ICV’s executive directors, welcomed all in attendance and shared the importance of celebrating Minority Day. A short video excerpt of founding father Quaid e Azam Mohammad Ali Jinnah’s address to the first Constituent Assembly of Pakistan on August 11, 1947 was then played. This video highlighted the phrase in which the Quaid declares: “You are free; you are free to go to your temples, you are free to go to your mosques or to any other place or worship in this State of Pakistan. You may belong to any religion or caste or creed -- that has nothing to do with the business of the State.” A short video of an interview of Martyr Shahbaz Bhatti followed in which he shares why he believes it is so important to celebrate Minority Day. The main speech that highlighted the contributions of religious minorities in Pakistan was made by 18-year-old Crystal Asher. She spoke compellingly about the role of Christians in the fields of health, education, politics and the military. She spoke of the consequences of nationalizing Christian schools and hospitals and emphasized the significant role Christians played in the prosperity of Pakistan. A music video was then played showcasing the amazing Christian talent in the area of music. The video was of a national song that was written and composed by Pakistani Christian musicians. The song was composed in honour of Pakistan’s Independence Day. The Chairman of ICV, Mr. Peter Bhatti, then spoke of the accomplishments of the religious minorities of Pakistan and urged all those in support of peace for humanity to come forward and work together to end justice and victimization in Pakistan. He emphasized that a lot of work still needs to be done to create the Pakistan envisioned by Quaid e Azam Muhammad Ali Jinnah and that it required everyone to join hands and work together. Rev. Dr. Rashid Gill, a very talented writer, then shared the poem he wrote in light of minority day. ICV was honored to have several special dignitaries attend the event. The event was attended by the Hon. MP Ramesh Sangha, the Hon. MP Salma Zahid and the Hon. Consul General of Pakistan Imran Ahmed Siddiqui. A message by Premier Kathleen Wynne was also read and presented by Mr. Mazhar Shafiq. MP. Salma Zahid spoke saying “whether you go to a Church or a temple or a mosque, Pakistan is for everyone.” She then quoted Prime Minister Justin Trudeau saying we are stronger together. The Honorable Consul General of Pakistan Mr. Imran Siddiqui then shared his thoughts about the role of religious minorities in Pakistan. He spoke of the excellent services provided by Christian schools and he reassured the religious minorities of Pakistan that Pakistan is a land of all its citizens regardless of their religious differences. He spoke of how he has supported Canadian Pakistani Christian musicians in the past and how he will continue to support and promote them in the future. To show their solidarity with the Pakistani religious minorities, Mr. Azim Rizvee and Mr. Mohsin Masood from the Pakistan Muslim community shared their thoughts. They both expressed their complete solidarity with all Christians and other religious minorities of Pakistan. Mr. Mohsin Masood was recognized by Mr. Peter Bhatti for being the second biggest donor at the Shahbaz Bhatti fundraising gala held on March, 2, 2017. This was followed by a poem by another exceptionally talented writer Mr. Daniel Namiat. Mr. Tim Iqbal, a Pakistani Christian community leader, also shared his thoughts on Minority Day. To conclude the event, ICV Vice-Chairman Mr. Tanveer Joseph thanked all dignitaries, community leaders, pastors and everyone present for attending the event. All pastors present at the event then came up to the stage and a prayer led by Pastor Alexander David was said for the prosperity and well being of Pakistan. He also said a prayer for the recently deceased Dr. Ruth Pfau, “Pakistan’s Mother Theresa”. The closing prayer was said by Pastor Yousif Nishan.