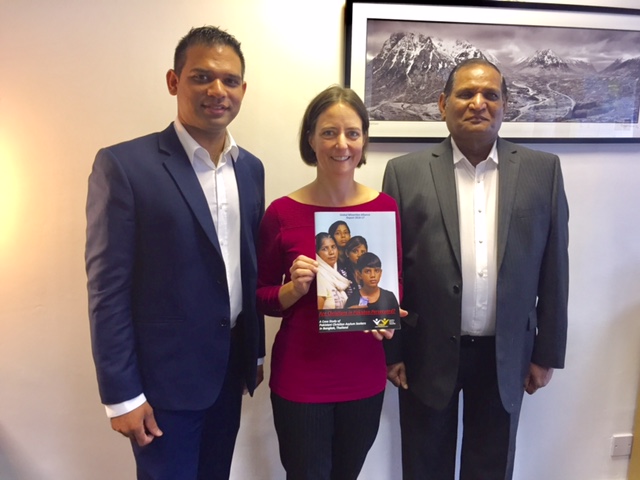 Glasgow: September 4, 2017. (PCP) A UK based human rights organisation, Global Minorities Alliance has published a fact-finding report on 4 September, 2017 highlighting the plight of Pakistani Christians fleeing religious persecution in Thailand. The report titled: ‘Are Christians in Pakistan Persecuted? A case study of Pakistani Christian Asylum Seekers in Bangkok, Thailand, which underpins the current debate in the UK after Home Office Pakistan country guidance report, 2016; argues that Christians in Pakistan are not persecuted but rather discriminated. The report is based on the interviews of 40 Pakistani Christian asylum seekers in Bangkok, Thailand as well as communication with the United Nations Human Rights Commission for Refugees (UNHCR) and faith based organisations. The interviews were conducted by GMA’s trustees and authors of the report, Shahid Khan and Rebecca Gebauer in July, 2016. Global Minorities Alliance was invited by All Party Parliamentary Group on Freedom of Religion and Belief, (APPG) a parliamentary Group which focuses on religious freedom and belief in a bid to collate information from another 27 UK based rights group to be presented in Home Office report on Pakistan country guidance report. Mr Khan, was one of the delegates at the hearing session and argued that given the decades long widespread systematic discrimination which often leads to direct violence against individuals and communities, amounts to persecution according to the Article 7 of Rome Statues. GMA argued that Christians in Pakistan should be given a ‘group recognition’ in the United Kingdom for those Christians fleeing persecution from Pakistan and further applying for sanctuary in the UK. See GMA’s submissions to the group here: https://freedomdeclared.org/media/GMA-Recommendations-FINAL.pdf Miss Gebauer, one of the authors of GMA report noted that ‘our research highlights the plight of Pakistani Christians who flee persecution in extreme cases and arrive in Thailand and become subject to ‘double persecution’. She further added; ‘Thailand being not part of the Refugee Convention, 1951 further complicates the plight of these individuals. The families we met in Bangkok, had little or in some cases no support, with no legal right to work, rent, food and fears of being detained by Thai police loom large for many of our respondents’. Dr Elham Manea, Associate Professor of Political Science and a human rights activist said; ‘GMA report provides a compelling evidence on the systematic and structural discrimination against Christians in their home country and highlights the miserable conditions they are facing in Thailand. The report is sectionalised in four chapters providing comprehensive insight into Refugee Crisis in Thailand, Detention Centres, Christians in Pakistan in the light of interviewees conducted by the authors. Lord David Alton of Liverpool noted that, ‘I hope that this admirable report is read by legislators, and policy makers around the world so that the question of religious violence can be tackled in Pakistan honouring the principles on which Pakistan was founded and its constitution established respecting all citizens, regardless of their religious faith. One of the interviewees in Bangkok, Thailand told GMA ‘I have been tortured for 14 days by Pakistani Police over a false allegation and I was clubbed by four men over my head, ankles and joints. I was later released. My family is in Pakistan. I am deserted and there is no help. I fear I will be sent back to Pakistan and my life will be worse than before, he told GMA. Earlier today, the report was presented to the UK Member of Parliament, Carol Monaghan who supported the ethos of Global Minorities Alliance which is based on justice, peace and equality and commended the efforts of GMA to promote religious freedom and human rights for all persecuted minorities around the world.