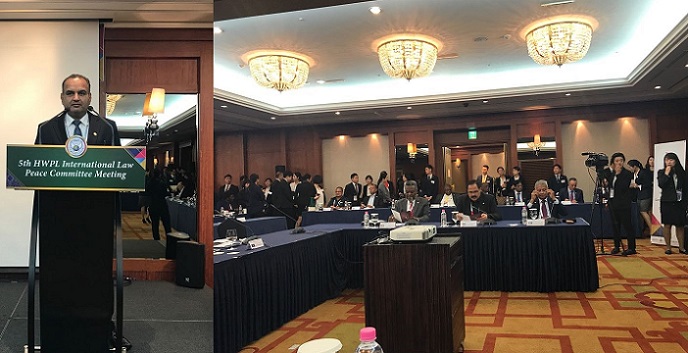 Islamabad/Seoul: September 18, 2017. (PCP) Patron-in-chief of Pakistan Hindu Council and Member of National Assembly Dr Ramesh Kumar Vankwani has said that peace is a common aim which every human-being loves to achieve, adding that win-win cooperation among all walks of life is essential for achievement of permanent peace in any human society. He was addressing as a keynote speaker to the 3rd Annual Commemoration of the September 18th World Alliance of Religions Peace (WARP) Summit, held at Seoul, South Korea. Representing Pakistan on the occasion, Dr Ramesh Kumar Vankwani said that the purpose of achieving a separate country in the Indian Sub-continent was to ensure regional peace, prosperity and harmony. Dr Ramesh Vankwani lauded the positive contributions of the Heavenly Culture World Peace Restoration of Light (HWPL), led by its chairman Man Hee Lee for promoting world peace and global harmony in the today's diverse world. Chairman Lee is considered to be most active peace advocate with regard to religious conflicts and war, interfaith harmony, human rights, and youth and women empowerment. Dr Ramesh Vankwani, a prominent parliamentarian, emphasized that that the Pakistan Movement was purely a peaceful struggle to achieve a piece a land where equal rights to every citizen could be provided. While quoting the Quaid-e-Azam's 11th August speech, he further informed that the Constitution of Pakistan, which was passed unanimously in 1973, also ensures the freedom to profess religion and to manage religious institutions. Dr Ramesh said that the majority of Pakistani people is peace-loving, open-minded and tolerant. However, he admitted that narrow-mindedness shown by not more than five percent extremist elements of Pakistani society is becoming a serious threat to the patriotic minority communities, and also bringing bad name to the country on international level. Being a parliamentarian, he also shared his experience for introducing new legislation in parliament specially related to the Hindu marriage act and prevention of forced conversions. " In response of my arguments, the detailed decision of June 19th 2014 by the Supreme Court for the protection of minorities reflects one of my most significant struggles in the legal field," Dr Ramesh Vankwani told. Dr Ramesh Vankwani also urged the need for taking solid steps for practical implementation of the HWPL's Declaration of Peace and Cessation of War (DPCW) which is driven by civil society, including women and youth communities. "We need to highlight that teachings of all religions urge their followers to ensure tolerance in their daily matters," he further said. On the occasion, his suggestions to develop strong bonds with each other on the basis of humanity were widely appreciated by the audience which consists of parliamentarians, religious leaders, civil society representatives, peace activists and media practitioner from 156 countries across the globe.