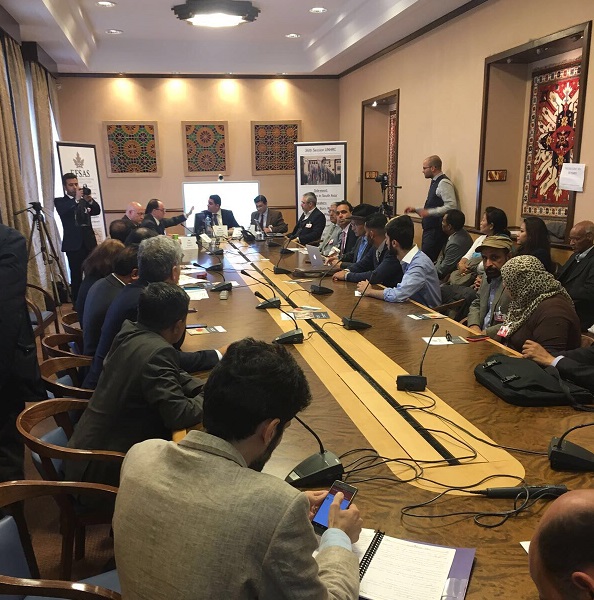 Geneva: September 21, 2017. (PCP) The European Foundation for South Asian Studies (EFSAS), an EU accredited leading independent, non-profit think tank and policy research institution based in Amsterdam, held a successful and well attended Side-event on “Terrorism in South Asia” during the 36th Session of the UN Human Rights Council in Geneva. The Side-event specifically focused on the region of South-Asia, Terrorism, Indo-Pak relations and the Jammu & Kashmir conflict. The audience mainly consisted of scholars, academics, human right activists and politicians. The event was moderated by Junaid Qureshi, a Kashmiri writer from the Valley of Kashmir and the Director of EFSAS. The event which explored the pertinent issue of Terrorism in South Asia was one of a kind, since none of the speakers were of a South Asian origin, and only consisted of scholars from reputed European Universities who deliberated upon Terrorism in South Asia from various perspectives based on their respective expertise in a bid to approach the challenges in South Asia from an academic viewpoint, with the aim to facilitate the understanding of the European audience of the complexities and sensitivities prevailing in South Asia. Dr. Paul Stott, from the University of Leicester, the Centre for International Studies and Diplomacy at SOAS London and an expert on Jihadism of South Asian origin in Britain and mainland Europe, said that British Islam is historically bound up with Islam in Pakistan which has also meant that problems or issues in Pakistan have at times become problems and issues in the UK. He continued that this also resulted in the fact that when international terrorist groups gained influence in South Asia, they were successful in directing attention towards Britain and Europe. Dr. Stott used the term British Jihadism to refer to the involvement of a highly significant number of British Sunni Muslims with South Asian origins in armed Islamic groups since the early 1990s. Dr. Stott concluded by saying that due to the ongoing consistent terrorist attacks in Europe, Britain’s focus on terrorism should not disregard the challenges imposed by the relations between Britain and Pakistan. He remarked that unfortunately Britain cannot look to representative organisations within British Islam to take the lead on addressing support among some British Muslims for terrorist groups. Prof. Rob McCusker, Head of Division for Community and Criminal Justice at De Montfort University in Leicester previously having worked with the Council of Europe, APEC, the Federal Bureau of Investigation (FBI) and the US State Department spoke about the functional interconnection between organised crime groups in service of terrorism by engaging in criminal activity and financing terrorism from proceeds of organised crime in which convergence is facilitated by similar logistical and operational requirements and synergies produced by sharing common infrastructure, logistical corridors, safe havens and financial and money laundering networks. Prof. McCusker also spoke about the AFPAK region and emphasized that characteristics for existence of nexus between terrorism and organised crime flourish in areas which are governed by warlords, militias and other violent non-state actors. He further added that the Taliban maintains an annual surplus of between $110 and $130 million while it supressed cultivation of poppy in Afghanistan to manipulate the international market price. He also said that there are some reports which indicate how the Taliban maintain engagements in heroin trade for arms trade with members of the Russian organised crime. Mr. Burzine Waghmar of the University of London’s School of Oriental and African Studies, SOAS South Asia Institute and Centre for the Study of Pakistan stressed predominantly on the Jammu & Kashmir issue during his speech. He argued that the Composite Dialogue Process, after Mumbai 26/11, is pretty much compost for which Kashmiris have much to be embittered about. He continued by saying that the stunning silence of Muslims in various matters depending on selective outrage, vindicates the sordid truism that they are selectively animated by outrages visited upon Muslims. While defining Terrorism, Prof. Boris Wilke, a senior Researcher & Political Scientist at the Institute for Interdisciplinary Research on Conflict and Violence of the Bielefeld University in Germany claimed that Terrorism is a strategy and not a creed. Prof. Wilke explained how in South Asia, promoting sectarianism and outsourcing military power as strategy has led to the growth of religious extremism which has eventually resulted in proxy wars which are a threat to global peace. He added that Jammu and Kashmir is an example in this regard. He ended his speech by emphasizing that developing localized and regionalized peace-justice equilibria between South Asian countries has become a necessity for global peace.