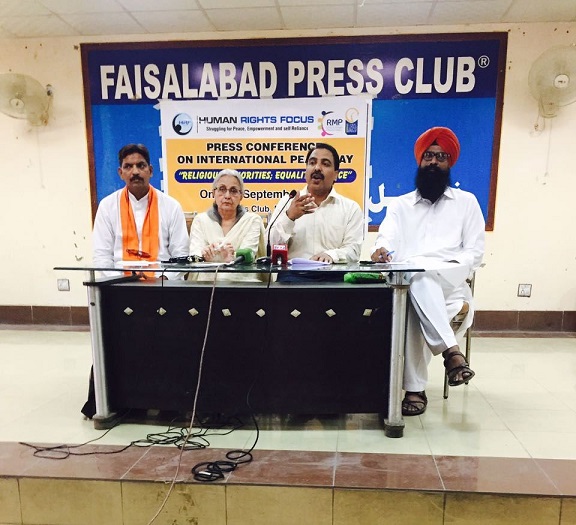 Faisalabad: September 21, 2017. (PCP) Human Rights Focus Pakistan (HRFP) in collaboration with Global Human Rights Defense (GHRD) and CRMP marked International Peace Day on 21st September, 2017 by conducting a Press Conference & Demonstration at Press Club, Faisalabad in the context of “Religious Minorities; Equality and Peace” Press Conference and Demonstration effectively highlighted gravest issues of the religious minorities continuously happening; while Government appears promoting culture of impunity against the offenders of human rights violations. The event joined by the Key Leaders from the religious minority community that included Christians, Hindus, Sikh and Bahai’s Community and also the human rights activists. Keynote of the Activity was loud & Clear “Elimination of Religious Minorities Persecution is inevitable in the promotion of Peace” Mr. Naveed Walter commenced the Conference by stressing the need for promoting peace at all levels of the Society. He particularly stressed that on International Peace Day there is a need of creating peaceful situation for the marginalized segments of the society particularly the religious minorities and for the women and children also. He stated that on International Peace Day Religious Minorities of Pakistan are seeking peaceful situation but unfortunately, they remain disappointed. He said religious minorities of Pakistan are facing brutal forms of grave violation on regular basis. Particularly, i) Fictitious Blasphemy Allegations against Religious Minorities of Pakistan, ii) Ablazing the Minority Colonies and their Worship Places, iii) Kidnapping, Forced Conversion and Forced Marriages of Young Minority Girls, iv)Assassination of Religious Minority Community on Belief Base, Property Base and Revenge Base, v) Restricting Religious Minorities to practice their Religious Faith, vi) Illegal Possession on Minorities Graveyards/Agricultural Landlords/ Homes, vii) Discriminations against the Religious Minorities at Workplaces, vii) Hatred Material against the Religious Minorities of Pakistan in Curriculum/text books, viii) Increased Culture of Impunity against the Offenders perpetuating Minority Violations. Hindu leader Mr. Amaranth Randhawa shared his apprehension on the situation of Hindu community in Pakistan. He said fears of the Hindu community are hiking in Pakistan due to presence of discriminatory policies, legislation, practices and attitudes against them. He shared in grief that since independence of Pakistan Hindu Community has always been estranged systematically causing migration of thousands of Hindu community members. Amaranth stated that current issue of forced conversion hikes Pakistan hindu fears. Every year many young Hindu girls from Sindh are kidnapped, forcibly converted and forcibly married to Islam. While no action is taken on practical grounds. He further added that long prevailing issue of Non-Registration of Hindu Marriages saw some positive developments from the Government of Pakistan in the form of Hindu Marriage Act passed in 2017 but unfortunately like other Acts of Pakistan, implementation remains a big issue. He further highlights that many temples/Gurdawars of Hindu community are illegal possessed by the Evacuee Department of Government. Equal citizen rights, hatred material and discrimination in 5 % job quota for the Hindu community were also the issues highlighted by him. Sardar Gurmeet Singh, a leader of Sikh community also shared view regarding minority rights. He spotlighted that violation against religious minorities has become an international issue. He said likewise religious minorities of Pakistan faces violent attitudes and behaviors. Regarding Sikh Community, he said the Government needs to undertake special measures for the Sikh Community to make them more empowered on all levels of the society. Ms Amina Zaman, a women activist demands from government of Pakistan to restore the citizen’s rights along with the rights of minorities, women and children , particularly to provide sufficient space to religious minorities in mainstreaming processes and end all religious discriminations against them. In the end of Press Conference, Speakers gave answers to the questions of media persons. President HRFP stressed that Government of Pakistan is aware of the situation/issues of religious minorities and must undertake serious and devoted efforts to remove all forms/shapes of discrimination from the society either by law enforcement activities or educational activities focusing on changing mindset/attitudes/behaviors of the Society. After Press Conference, HRFP Staged Demonstration before Press Club and condemned the current government policies and legislations affecting peaceful society especially in the context of religious minorities basic right and fundamental freedoms. The protestors chanted slogans and raised play cards regarding “End of Discriminatory Laws and Practices against Religious Minorities” & “Importance of Peace in the Society”. The protesters of the demonstration urged Law Enforcement Institutions to provide legal cover to minorities in the event of minority rights violation against them. Following recommendations were given by panelists to improve situation of religious minorities across the Pakistan. 1. Kidnapping, Forced Conversion & Forced Marriage has become the biggest issue for religious minorities of Pakistan which the Government must address on urgent basis. 2. The Step of enacting “Hindu Marriage Act, 2017” is condemnable by the Government, but the implementation mechanism of this Hindu Marriage Act, 2017 needs to deliver on grassroots level. 3. Controversial Sections of Blasphemy Law (Section 295 B/C) must be reviewed and amended to protect the rights of innocent individuals/families/communities who are perpetuated on baseless grounds. 4. The Evacuee Department of Government should remove illegal possessions from the Temples/Gurdawars/ Holy Place of the Hindu Community. 5. The government should fulfill its written statement submitted on 24th May, 2017, in response of HRFP’s writ petition at Lahore High Court to revise hatred chapters, contents and references from the text books and curriculums against the religious minorities of Pakistan. 6. Sufficient amendment must be ensured in the discriminatory Articles of Constitution of Islamic Republic of Pakistan particularly Article 2 and 41. 7. The government should implement the verdict of Mr. Justice Tassadq Hussain Jillani’s verdict of Supreme Court dated 19 June 2014.