Pakistan is plagued with Sectarian and Religious conflicts; HRFP 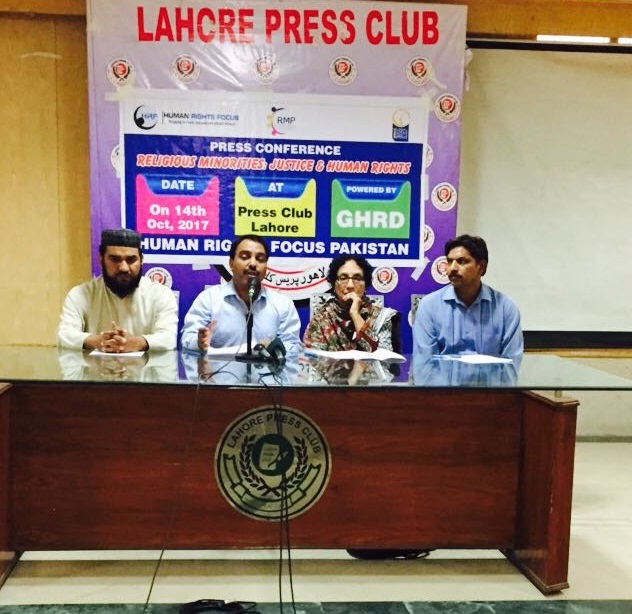 Lahore: October 14, 2017. (PCP) Human Rights Focus Pakistan (HRFP) in collaboration with GHRD (Global Human Rights Defense) and CRMP organized a Press Conference at Press Club Lahore aiming to ensure Easy Access to Justice and rights protection for minority community. Naveed Walter President HRFP stated that nowadays the country is plagued with Sectarian and Religious conflicts all around. The Historical Speech of Mohammad Ali Jinnah which he delivered on 11th August,2017 can play a guiding role to ensure that all citizens of Pakistan should be provided equal rights regardless of their Religion, Caste, Color and creed. The protection of Churches, Temples and Gurdwara’s were also ensured in that Speech. Unfortunately, every time the Soul of Mohammad Ali Jinnah (founder of Pakistan) will get disturbed when swords of religious discriminations are regularly practiced against religious minorities; when minority person/leaders are assassinated, when Christian and Hindu Girls are forced to converted into Islam and forcibly married, when minorities are fictitiously alleged for blasphemy Charges(295B/295C) and when any individual/ family of religious minority leaves the Country due to life threats. Naveed Walter further said; in a nutshell the pattern of violations against religious minorities is unstoppable. Continuous efforts are being undertaken to sideline the religious minorities and now the conspiracy against the religious minorities has reached the Parliament. As a civil society representative, we don’t categorize any person / group but condemn every act in which religion intervenes with the state affairs. Targeting someone in the name of religion has become a common practice; religious minorities are soft target of this religious hatred. As a Nation, we need to indulge the vision and ideologies of founders of country into the Constitution and Laws of Pakistan; he added more. Naveed Walter president of HRFP stated to make Pakistan a country of Pakistan’s founders, we demand; The speech of Mohammad Ali Jinnah to the 1st Constituent Assembly on August 11, 1947 should made be a part of the Constitution of Pakistan, The implementation of Article 27 must be ensured which states that; No citizen otherwise qualified for appointment in the service of Pakistan shall be discriminated against in respect of any such appointment on the ground only of race, religion, caste, sex, residence or place of birth, Ammendment in Article 2 should be made and State should be kept separate from the religion. Article 41 should be reviewed and to make religious minorities equal citizens of Pakistan, the practical steps and mechanism based on Protection, Justice and Rehabilitation should be implemented on priority basis, Controversial Sections of Blasphemy Law (Section 295 B/C) must be reviewed and amended to protect the rights of innocent individuals/families/communities who are perpetuated on baseless grounds, Kidnapping, Forced Conversion & Forced Marriage has become the biggest issue for religious minorities of Pakistan which the Government must address on urgent basis, The government should give proportional representations to minorities in political process according to their exact populations by implementing the true democratic practices and have to take steps towards “Election-No Selection”, The government should fulfill its written statement submitted on 24th May, 2017, in response of HRFP’s writ petition at Lahore High Court to revise hatred chapters, contents and references from the text books and curriculums against the religious minorities of Pakistan and The government should implement the verdict of Mr. Justice Tassadq Hussain Jillani’s verdict of Supreme Court dated 19 June 2014. Naeema Malik, Women Human Rights Defender and representative of South Asia Partnership stressed that roots drivers of discrimination against all minority religions needs to be rooted out from grassroots levels. The biased material against religious minorities in curriculum, prejudice behaviors of the Society, discriminatory laws and practices, hatred disseminated in classrooms and religious institutions, all should be reviewed and revised. She further said that democracy cannot be existed until the rights of women, children and minorities are not restored. She said further, the more legislations are required to protect the minorities and implementation of laws as well. Hafiz Nauman Hamid, Executive Director World Council of Religions said, the minorities have historical and unforgettable role in the formation and defense of Pakistan, so they should have the equal rights. Every citizen of Pakistan should have the equal opportunities and status without any discrimination in race, religion, creed, cost and sex in any department of Pakistan. Amaranth Randhawa, leader Hindu Sadhar Sabha stated that abductions, forced conversions and forced marriages of Hindu girls is on peak but no actions are taken on practical grounds by government. The long prevailing issue of Non-Registration of Hindu Marriages saw some positive developments from the Government of Pakistan in the form of Hindu Marriage Act passed in 2017 but unfortunately like other Acts of Pakistan, implementation remains a big issue. He further highlights that many temples of Hindu community are illegally possessed by the Evacuee Department of Government. Equal citizen rights, hatred material and discrimination in 5 % job quota for the Hindu community also the issues highlighted by him. He further said that Pakistani Hindus are the Pakistani so don’t relate them with India.