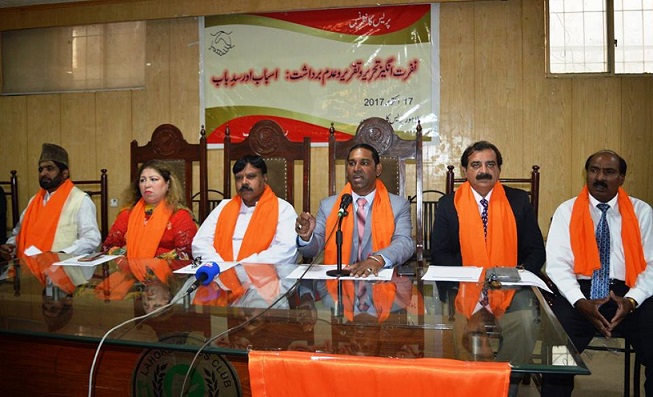 Lahore: October 18, 2017. (PCP) Rwadari Tehreek, a social movement working to promote religious and social harmony in a Press Conference has expressed deep concerns and outrage over the hate speech in the parliament by a ruling party parliamentarian and has demanded an appropriate action to avoid such instances in future. The Press Conference which was held at Lahore Press Club on 17th October and was presided over by Mr. Samson Salamat, the Chairman of Rwadari Tehreek and the Panelists from different sects, religions and different walks of life included Mr. Abdullah Malik (President of Civil Society Network), Rev. Pastor Shahid Miraj, Pastor Emmanuel Khokhar, Pandit Bhaghat Lal Khokhar, Ms. Sadia Sohail MPA PTI, Syed Waqar Hussain Naqvi, Pastor Saleem Khokhar, Mr. Tariq Siraj (President Mutehida Masihi Party), Pastor IB Rocky, Mr. Liaqat Bhatti (Secretary General Lahore Church Council), Ms. Kathrine Sapna Karamat (Director CTS). Addressing the Press Conference Mr. Samson Salamat, Chairman Rwadari Tehreek said that the speech by the Parliamentarian was highly discriminatory and incitement of violence towards minorities and was contrary to the vision of the founder of Pakistan. The founder of Pakistan, Mr. Muhammad Ali Jinnah during his first address to the Constituent Assembly of Pakistan said “We are all citizens and equal citizens of one state….Now I think we should keep that in front of us as our ideal, and you will find that in course of time Hindus would cease to be Hindus and Muslims would cease to be Muslims, not in the religious sense, because that is the personal faith of each individual, but in the political sense as citizens of the State.” Mr. Samson Salamat added that “the discriminatory and hateful speech in the parliament has fueled the highly intolerant society, and has increased a sense of threat and terror among the citizens belonging to religious minority communities who in the past have and are already prey of religious discrimination and violence”. Mr. Samson Salamat suggested that proper mechanisms should be formulated to monitor hate speech and all the individuals and groups involved in spreading hatred and violence should be held accountable indiscriminately. Mr. Abdullah Malik said that “the religious minorities of Pakistan has played a vital role in the socio- economic development since the creation of Pakistan but this is an extremely disappointing trend that they are being discriminated and considered as lesser citizens which is the violation of the Constitution of Pakistan and international human rights standards”. Mr. Malik added that “it is very sad instance that a member Parliament was allowed to express such intolerant and politically incorrect views with impunity and no action has been taken so far. It is regrettable that no political party or attending parliamentarian condemned this parliamentarian”. Mr. Malilk suggested that Pakistan an effective De-radicalization plan should be made which should include the ban on hate speech, elimination of biased material from the curriculum, ban and action against all terrorist outfits, their financiers, facilitators and supporters and de-weaponization policy to stop Gun and Bomb Culture. Rev. Shahid Miraj said that that the citizenship should be unbiased and on equal grounds without any discrimination. The speech made in the parliament was highly discriminatory and it under-mines the role of religious minorities for socio-economic development and creation of Pakistan. Rev. Miraj demanded that “the custodian of the Parliament should work out on a policy to avoid such discrimination and incitement in the parliament”. He further demanded that the religion must be kept separate from politics and state affairs”. Ms. Sadia Sohail MPA of PTI said that rather than hate speech against minorities, we must appreciate their role as Pakistani and give them confidence to ensure that the vision of the founder of Pakistan is being implemented who ensured that all citizens are equal. Ms. Sadia Sohail demanded that the National Action Plan should be implemented in letter and spirit to eradicate hate speech and use of religion for political purposes.