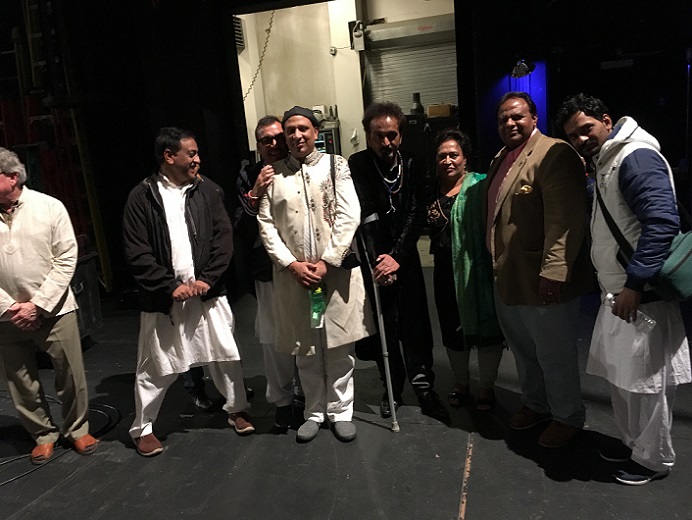 Albany, NY: October 31, 2017. (PCP) The Founders of Pashtun Cultural Institute Nasima Khan and Nisar Khan attended performance at Proctors Theatre in the capital region of New York where “The Song of Lahore” presented Pakistani Classical Jazz. The Performance was stunning as the ensemble played for 90 minutes, the Classical Jazz Rhythms as soon as the Program started with an introduction by Mrs. Noor Majeed, the audience was engulfed in the permanence of the Artists. The selection of the Titles are beautiful with the age old classic tunes given a new meaning to the art that was considered been death to be woken up with a touch of a Maestro in creation of this ensemble. This is must see for the US-Pakistani American as the age old saying by the famous Poet Khalil Jabrin “If you whisper to the Winds - don’t blame the winds to tell it to the trees”. Well readers here are the whisper… The ensemble is performing all around the US and then in Brazil. This is classic performance of the Pakistani Artist at best by the Conductor Nijat Ali, and the Maestro who has given the world a chance to lite the candle and swing the cradle, gave the audience title information before each performance was played, the wonders of Jazz and classic Pakistan music is alive after all (Tabla/Dholak/Guitar Bass/Flute/Sarangi/Piano) Artist Baqar Abbas played bansuri (flute), Nadeem Abbas – bass, Danish Ali – piano, Najaf Ali – dholak (hand drum), Zohaib Hassan - sarangi (bowed string instrument), Ijaz Hussain – tabla (hand drum), Ali Shaiba – drums and Nijat Ali – conductor This performance was at the Proctors Theatre in Capital District of NY, was attended by the sensational love for the music listeners and it was left a note for ages to come. The next schedule performance is at the SPAC. For those who care about music and art should not miss this information about the Oscar winning movie “Songs of Lahore” with Pakistani, Sharmeen Obaid-Chinoy and musician who performed in it. Izzat Majeed, a Pakistani investor and hedge fund manager turned philanthropist and music producer, deeply influenced by American Jazz, is the producer of Songs of Lahore. The movie follows the lives of a few musicians after the music industry in Pakistani was basically destroyed by the Taliban. Sachal studio sprang up in Lahore and the musicians adapted their music to a jazz form. They were invited to play at the Lincoln center in New York City with Wynton Marsalis and his American jazz band. It was an outstanding performance, a blend of Eastern and Western instruments. Also, “The Song of Lahore” will be shown at Bowtie Criterion Cinemas 11 & BTX, 19 Railroad Place, Saratoga Springs, on Sunday, Oct. 29. The Sachal Ensemble will perform at 7 p.m. Monday, Oct. 30 at the Spa Little Theatre, Saratoga Spa State Park, and Saratoga Springs.