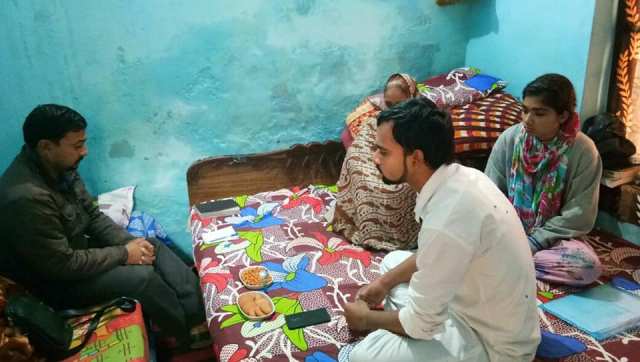 India: November 19, 2017. (PCP) A family of five in the State of Haryana in Northern India is struggling to make ends meet as winter approaches after refusing to give up their Christian faith at the behest of the family patriarch. The patriarch namely Ramesh Kumar, a Hindu, is scandalized by his family coming to faith in Jesus Christ which is a very common occurrence in India were changing one's faith from Hinduism is abhorred and can lead to extreme violence. In many States anti-conversions laws exists. In February of this year Mr Kumar, a married father of four, decided he could no longer tolerate his family's attendance at a local church, and demanded that they cease observing Christian worship. When they did not give in to his demand he began beating his wife and children and despite his well paying job as a government employee he cut them off financially, then officially repudiated them on 25 September. Mr Kumar stopped providing for their basic needs so his oldest son Neeraj (23 y/o) used his meager income as a shop clerk to provide for his mother and three siblings who all remain students. They also received some intermittent help from a maternal uncle when these wage earnings were not quite enough. Not satisfied with this hardship he had put on his children, Ramesh Kumar approached his son's employer the 30th of October to interfere with Neeraj's ability to feed his mother, brother and sisters. As a result of his father's effort to malign his character and out fear for attracting further trouble, the owner told Neeraj that he could no longer work at the shop. On 15 November Mr Kumar escalated his assault and summarily said, "If you did not stop going to church. I will drive you out from the house and file an [apostasy] case against you all since you have changed your religion." Mr Kumar finally submitted a complaint to the police station in which he fabricated a story claiming that his family would, "take me church forcefully" and "want me to change my religion" . Mr Kumar further concocted that when he refused to do that his "family members tied my legs and hands and took me to the Church," Falsely alleging that, "My son said if you will not go to Church with us then we can kill you." Three times the entire family were called into the police station for questioning and asked, "Why you have changed your religion and beat your father?" But the police refused to believe any statement that they made in their own defence and joined in pressuring the family to meet the father's demands to stop attending church. All five believing members of the family are under great pressure to give up their faith, as the extended family is united against them insisting, "Everything will be all right if you stop going to the Church." But the children and their mother have resolved, "We will not stop going to the Church because we know Jesus is the True God who died for us." These events have only served to strengthen their faith in Jesus Christ and have made them more determined to follow Him despite the suffering and deprivation they now face. On November 17, 2017, Mr Kumar put an advertisement in a local newspaper making the false allegations of physical abuse, disowning his family and disavowing any responsibility for what might happen to them. We hope that this is not a prelude to violence against the family as his attempt to point out their location to sympathetic radicals is duly noted. This advertisement was repetition of his earlier report on 25 September where Mr Kumar went to the Court and made a signed official statement claiming the following: Our British Asian Christian Association officer, Pastor Naresh, relayed his observations from his visit to the family: "Today I met Sunita and her two children while her two other children where at school. She has four children, from eldest to youngest is Neeraj (23 yrs) , Sapna (19 yrs), Pardeep (17 yrs), Gaytari (15 yrs). When I heard their story their great pain was apparent. They have been abandoned by the community because of their faith and no one [except Pastor Ramesh] is coming forward to help them." Wilson Chowdhry, Chairman of the British Asian Christian Association, said: "The disownment of his children by a patriarch has left this family very vulnerable. They have been targeted by a father who is caught up in the religious zeal that has become more commonplace in India since the modi regime came into power. "Proliferation of anti-minority propaganda, and a biased national curriculum that continues to demonize other faiths, has had the efect of polarizing communities. Moreover a growing number of incidents of minority persecution, is a poor indictment of Indian society which lacks harmony and tolerance in many regions. "The Indian Government must retract the anti-conversion bill or the future for Christians and other minorities in their nation will remain bleak, as the law will serve as a weapon for extremists."