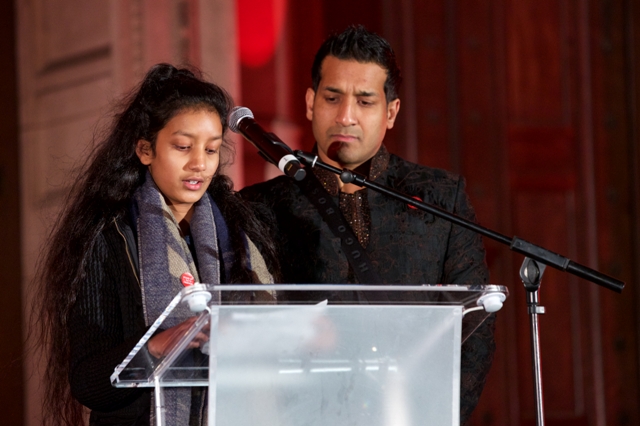 London: November 24, 2017. (PCP) Last night on the steps of Westminster Cathedral 100's of Londoners were shocked into silence as a 13-year-old student volunteer for the British Pakistani Christian Association, described the torturous life that faces Christians in Pakistan. Hannah Chowdhry who is a student at Kantor King Solomon, High School in Barkingside, Redbridge and a volunteer for the BPCA, spoke of the suffering of millions of Christians in Pakistan, during a presentation that she read out to Londoners who amassed outside Westminster Cathedral last night (22nd November 2017). The atmosphere at the event which had been organised by Aid to the Church in Need (ACNUK), a Catholic Charity, was one of sombre attention as people gathered to hear about the plight of Christians suffering across the globe during a day designated as 'Red Wednesday'. ON their website ACNUK describe the purpose of the event: "Red is the Christian colour of martyrdom. Christians are the most persecuted faith group in today’s world and #RedWednesday will honour all Christians who suffer and die for their faithfulness to Christ’s message of peace and love. "#RedWednesday will shine a light on Christian persecution but also highlight the injustices perpetrated against other faith groups." The initiative is in its second year and Landmarks in the UK, Ireland, Iraq and the Philippines were floodlit in red to highlight the persecution of faith groups for their “peacefully held beliefs”. Around 50 buildings in the UK were lit up in red, including London’s Houses of Parliament, 12 cathedrals – some Anglican, some Catholic – as well as schools and universities. More than 80 Catholic churches and universities in the Philippines were also floodlit for the event after the country’s bishops’ conference endorsed the initiative. In Iraqi Kurdistan, Chaldean Catholic Archbishop Bashar Warda of Erbil committed his church to being lit in red. Warda, whose diocese has been caring for more than 100,000 people mainly Christians who fled Islamic State in 2014, said local Catholics would also take part in a prayer vigil that will end in a church he opened last year, to cater for the influx of refugees. By far the youngest speaker at the Westminster event Hannah Chowdhry explained to visitors that an estimated 700 Christian girls are kidnapped, raped and forced into Islamic marriage every year. She then clarified that an estimated average age of the kidnapped girls is 13 years. When she revealed that she was a 13-year-old Pakistani Christian girl the silence in the crowd was palpable. Hannah had obtained the statistic via a report produced by Muslim NGO Movement of Solidarity and Peace in 2014. Hannah Chowdhry, spoke to the BPCA, after the event, she said: "Most people around the world know about the kidnapping of 276 girls from Chibook in Nigeria, a crime that shocked the globe. Yet though 700 girls are believed to be raped and forced into Islamic marriage every year, no-one bats an eyelid. In fact the world stays silent. "When I think of what these girls have had to go through I shudder, I would feel totally lost in a similar situation and am sure I would lose all hope. So, I choose to speak out for them." Hannah described violence in the form of terrorists’ attacks, the burning of several Christian communities and over 1 million Christian slaves who are deployed in the brick kilns of Pakistan, during a moving speech that caught the attention of all visitors. She was met with a rapturous applause that delayed the sharing of actual persecution accounts by her father Wilson Chowdhry, who is Chairman of the British Pakistani Christian Association. Hannah Chowdhry, added: "Events like Red Wednesday provide an opportunity to raise awareness of global persecution of Christians and people from other faiths. Sadly however, too often people who hear these messages do nothing to bring change to the terrible persecution it is this apathy that allows persecution to continue. "I am praying that Pakistani leaders feel ashamed of their current treatment of minorities and alter the current unfair political system and social climate in their nation."