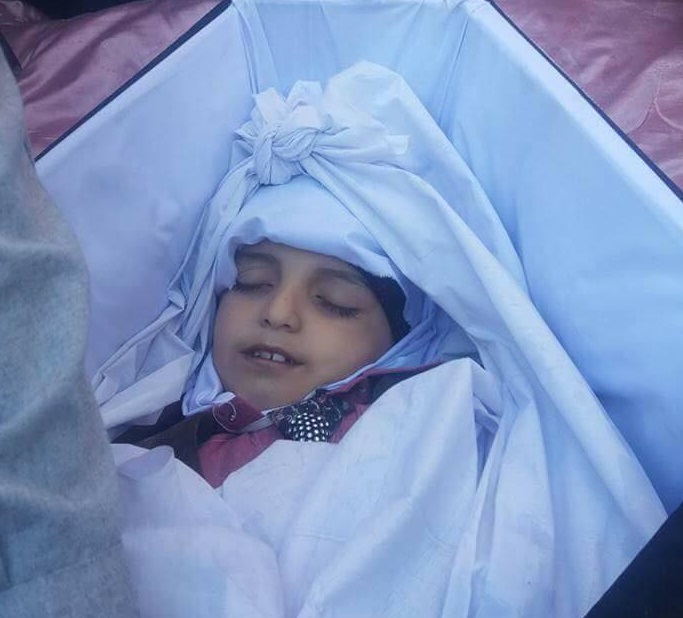 London: December 10, 2017. (PCP) A mother who lost her seven-year-old son in a terrorist attack on a Christian community last week has condemned the Government for not providing any help to the struggling families who have been affected by the recent explosion. The attack which occurred at 6pm on 1st December 2017, killed poor Issac Masih (aka Lucky) who was playing outside with his cousin Khan Masih (4 years) nearby a car outside the gate of the Christian colony. Although a military spokesperson in the wake of the incident referred to the explosion as a terrorist attack triggered by a grenade, since a further investigation it was discovered that in fact a time bomb had been placed in the vehicle before the gate. Alarmed by the explosion that parents of Isaac Masih rushed out and found the two bodies of the children on the ground. Both children were not moving and many other neighbours gathered around to help. A Neighbour offered to drive Asalam (54 yrs) and Noreen Masih (48 yrs) the parents of Isaac, Vickram (44 yrs) and Nasreen (38 yrs) the parents of Khan and and the two children to Civil Hospital in Quetta. Despite both children being unconscious both sets of parents were praying that they were still alive. When they arived at the hospital however, doctors immediately gave devastating news to the parents of Isaac when they informed them that he was dead on arrival. However, Khan Masih was taken in for treatment and had shrapnel removed from his back, head and left leg. After a two-hour successful operation he gained consciousness and remained in hospital for four day before being discharged and returned to his family. Khan Masih will need some time to recover fully and is still receiving less serious treatment. Although initial costs for the child's operation are free from the government no help is being provided for ongoing treatment, which includes; a daily change bandages, antibiotics and painkillers. The parents are extremely poor and live in Chaman Colony were all the employable aged members of the 35 Christians families are working as municipal cleaners. The family have asked for help for ongoing medical costs which amount to £20 a month for the next six months. The parents of Issac have asked for help with funeral costs amounting to £100. BPCA have started an appeal to help these families. If you would like to donate, please (click here) Army officials and Government officials visited the families to share condolences in the community, but have offered no financial assistance to either family. The community itself has been the target of threats from Taliban on several previous occasions which have been reported to and registered with the police and army. Pastor Adil, from Full Gospel Assembly and officer for the BPCA, met the families, he said: "The two couples are visibly traumatised but no effort has been made by the Government to provide support or counselling, instead the deprived families have been left with medical and funeral expenses. "The Christian community has for many years been reporting threats made to them by local Muslims, that included warnings that they would be subjected to a bomb attack. However they have been summarily ignored whenever they report these to security forces. In fact despite community leaders calling for increased security none has been offered. A heavy security presence was in place for three days after the attack but the security has now disappeared." On Sunday 3rd December one day after the attack a service was held at a church that serves the 35 local Christian families without any worship songs. The Pastor of the church has decided not to sing worship songs at the church for at least the next few weeks so as not to offend local Muslims. Mother of Isaac, Noreen Masih, said: "My heart has been broken in two. My husband and I waited many years for the birth of my son and in a moment these cruel murderers have killed him and taken away my joy. They care nothing for the pain I feel. Their only desire was to murder Christians. "Men in uniforms from the army and police and politicians have told me how they feel my pain, but we receive no help, nor no news of the capture of the murders. I want to ask them to their faces why they have taken the life of an innocent boy. "I find it hard to sleep now, I feel old and weary, I pray to God that he will take me to heaven soon so that I can be reunited with Isaac. I cry and cry but the tears do not bring Isaac back or ease my pain." The incident was featured in only a few newspapers after the Government called for a media blackout on this incident affecting Christians, despite a previous attack on Muslims being widely reported. Here is one corroborating article however. Wilson Chowdhry, Chairman of the British Pakistani Christian Association, said: "The death of Isaac is a bitter pill to swallow. I feel traumatised just reading this account I cannot fathom the pain his parents are going through. In recent months many young Christian lives have been taken in brutal accounts of violence and terrorism, every story makes me shudder and hold my own children tighter. "Every murder, every attack, every kidnap and rape that I learn about adds to my worsening opinion of Pakistan. Yet none of these stories seem to dent the false impression held about the 'democratic nation' of Pakistan, by western politicians. "Christians across the whole of Pakistan are preparing for Christmas celebrations, however Easter and Christmas have become some of the most popular dates for terrorism against the Christian minority. Fear of an attack will not thwart Pak-Christians attending church but the next few Sundays will no doubt be full of anxiety. "This Christmas I am going to pray for Christians in Pakistan more fervently then ever. I ask that others join me."