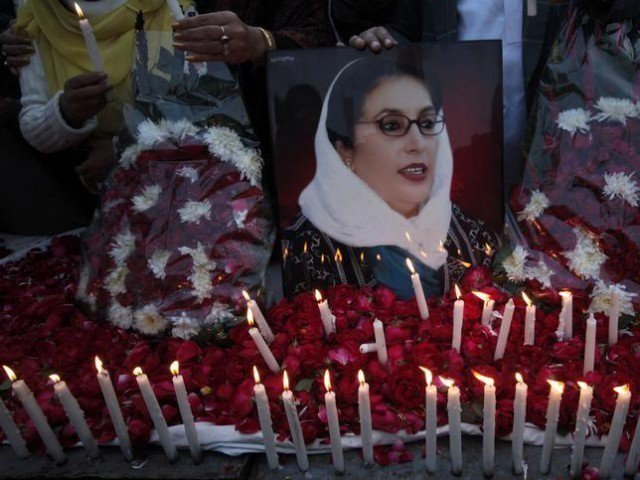 LARKANA: December 27, 2017. (By Nazir Siyal) Pakistan Peoples Party (Parliamentarian), Pakistan Peoples Party (Shaheed Bhutto) and PPP-Workers separately observed 10th death anniversary of slain PPP Chairperson Benazir Bhutto here at Garhi Khuda Bux Bhutto on Wednesday. Chairman PPP Bilawal Bhutto Zardari, Co-Chairman former President Asif Ali Zardari, Bhutto family members and the Party leaders visited mazars of Benazir Bhutto, Zulfikar Ali Bhutto and others all the day at Garhi Khuda Bux Bhutto and laid floral wreaths at the graves of Shaheed Benazir Bhutto, founder of PPP Zulfikar Ali Bhutto. They also visited the graves of late Mir Murtaza Bhutto and Late Mir Shahnawaz Bhutto and offered fateha. On the eve, Sindh government had announced public holiday on December 27, 2017. After dawn of the day recitations of Holy Quran sittings at Naudero, Larkana and Garhi Khuda Bux were organized and hundreds of camps set up at different locations, where lunger also distributed among the devotees before the rally infront of Mausoleum of Bhutto family. There were foolproof security arrangements made around Garhi Khuda Bux Bhutto and walk-through gates with metal detectors installed at every entry routes to Mazars of Shaheed Mohtarma Benazir Bhutto. Former prime minister slain leader of Pakistan Peoples Party Benazir Bhutto assassinated on December 27, 2007, during a public rally led by her in Rawalpindi. PPP Chairman Bilawal Bhutto Zardari has said that her mother Benazir Bhutto was punished only for fighting against the dictatorship for true democracy; Mushraf pulled security and plotted the conspiracy of murder of PPP Chairperson. Addressing a huge Public rally before the Mausoleum of Bhuttos, Party Chairman Bilawal Bhutto said that Benazir wanted to demonstrate true picture of Islam a peaceful internationally, their party would lead such a legacy of her mother to the world. He said after the carnage in Rawalpindi and killing Benazir Bhutto actually it was plan to kill the whole nation but former president raised a slogan of “Pakistan Khappay” and ultimately saved country. Bilawal said Benazir Bhutto lost her all family among father, brothers and even mother in the struggle for masses rights and against the dictatorship, but she eventually embraced martyrdom to continue such a legacy of her father Zulfikar Ali Bhutto. Meanwhile, In Garhi Khuda Bux, Pakistan Peoples Party (PPP) Co-Chairman former president Asif Ali Zardari criticizing PML-Nawaz by rejecting any talks of NRO in future, he said the party will not accept another deal because of trust bothside. Speaking to the momonth gathering at her slain wife Benazir Bhutto’s 10th anniversary, Asif Ali Zardari has said he was remain 12 years in jail but you could not bear difficulties and get rid off after singn NRO, so that it will not happen again in future politics he said. Former President said the conspiracies were still being hatched against his party and they observed the results for a long, as such conspiracies against Benazir Bhutto, these bad eggs of the conspiracies still hatching in shape of kaptaan, while others are coming to the forefront. The former president also promised the rally that PPP will return to power in the upcoming elections and betterment of people rights. The real leader is Bilawal Bhutto in the political race and the leader of the nation is Bilawal he said.