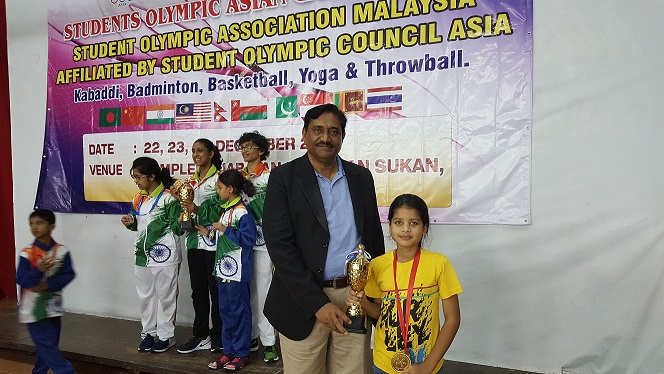 Karachi: January 20, 2018. (By Ayyaz Gulzar) Rose Maria Gill is honored and warmly welcomed as a ‘Gold Medalist’ in Convent of Jesus and Mary School, where she is a Student in 6th Standard. Rose Maria Gill said: “I was shocked, completely puzzled when they announced my name for the Gold Medal for Yoga Competition, I was not expecting it because my competitors were much better than me and practicing very professionally.” “It was a tough competition, my competent were from six countries and Indians and Sri Lankans were performing very finely, When I saw their performances I decided to perform the given exercises with perfection to score maximum points”, Rose Maria added Rose Maria Gill, 11 is a Catholic member of St. Patrick’s Cathedral Karachi was one of the 51 athletes represented Pakistan in ‘Students Olympics Asian Games 2017-18’ held in Johor Baru, Malaysia from Dec.22nd till 24th. She was the only contestant from Pakistan for the ‘Yoga Competition’ and was first time representing Pakistan in Students Olympics Asian Games. She competed in category of age under 14 years. I am learning Yoga from past one year, a private teacher comes to guide me at home, Rose informed. Telling about her welcome at airport she said: I was shocked to see a massive crowd of more than two hundred people, many unknown people walked towards me to congratulate and to garland me. It was amazing to see a loving response for me and all in the team. Overall in the competition Malaysia stood first with 900 points, India ended at second place by scoring 750 points and Pakistan held third position by scoring 740 points and winning a Gold Medal in Yoga Competition, 2 Gold Medals in Throw Ball, Silver Medal in Badminton, Basketball girls teams won Silver Medal and boys team won bronze medal. Maqbool Arain President and Rasheed Gill Secretary General of Pakistan Students Olympic association said: “We are joyful that our young athletes performed well. This is the first time Pakistan team participated in Students Asian Olympics and ended up nicely. Though facilities provided to athletes are not many in very limited resources they excelled.” “We are appreciating and encouraging our rising stars and expecting same support from the Government and Pakistan Sports federation. We demand Pakistan Sports Federation to step up and equally support games like Badminton, Basketball, Throw ball and Yoga as they are supporting Cricket.” they added. Harry Charles another Catholic Sportsman was leading a throw ball team as Captain told ucanews.com, “I was full of joy holding the Winning trophy and receiving gold medal. It’s an honor for my country, community and family.” I am glad that association is working without any discrimination and providing equal opportunities to every player without looking at any difference of casts, creeds, ethnics and tribes, Charles added. As per information provided by the Students Olympic association there were 7 Christian and 1 Hindu in the Pakistan Students Olympic team participated in the various games. Fr. Mario Rodrigues, Director of Catholic Youth Commission Karachi said: “Our youth is very talented and they do things wonderfully whenever they get a chance. There is enough talent in the city and country the only need is to nurture them well.” It’s an honor for the family and community; I appreciate the hard work of the gold medalists and encourage them to keep up the spirit to bring honor to country and the nation, I am grateful and appreciate the Students Olympic association for giving an opportunity to our Students, Fr. Rodrigues added.