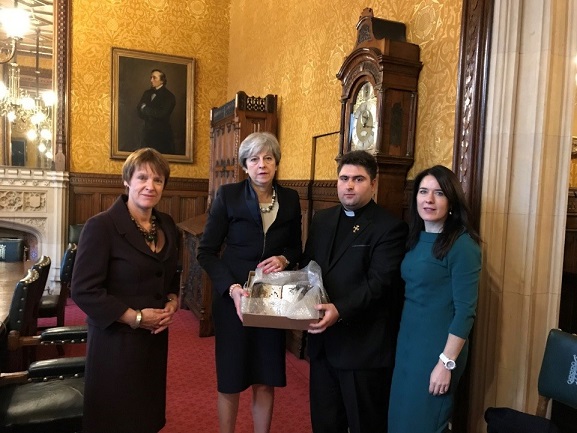 LONDON: February 13, 2018. (By Sheraz Khan) Following the launch of Open Door’s World Watch List last month, Michelle Donelan, Member of Parliament for Chippenham, asked whether part of the international aid budget should be earmarked for Christians suffering persecution in Prime Minister’s Questions in the UK House of Commons on Wednesday, the 7th of February 2018. According to a press release by Open Doors UK (www.opendoorsuk.org), a British-based charity founded by Dutch-born missionary, Brother Andrew, whose story is told in the best-selling book, God’s Smuggler, said that in response Prime Minister Theresa May referenced her meeting with Open Doors partner, Father Daniel, from Iraq and his experience of persecution. The release quoted Mrs May as saying: “I have to say to my honourable friend this is an issue that I know is of concern to many members of this house and I was pleased, a matter of weeks ago, to meet Father Daniel from Nineveh who talked about the very real persecution that his congregation were suffering and had suffered in the past. He presented me with a Bible which was burnt, which had been rescued, when a church had been set on fire.” It went on to quote the British Prime Minister as saying: “This is a real issue. All of our aid is distributed on the basis of need to ensure that civilians are not discriminated against on the basis of race, ethnicity or religion”. It said that Mrs May said: “We are working with governments, the international community and the United Nations to support the rights of minorities and to ensure our aid does reach those in need. But we will of course further explore what more support we can give to ‘knock’ the persecution of religious minorities.” Reacting to Mrs May’s response the release stated that more can be done to protect religious minorities. It quoted Zoe Smith, a spokesperson for Open Doors UK and Ireland as saying: “We were delighted that the Prime Minister acknowledged the “very real persecution” of Christians in PMQs today and highlighted her recent meeting with Father Daniel, organised through our Hope for the Middle East campaign. While the UK government has repeatedly highlighted religious freedom as a priority on paper, we agree with the Prime Minister that more can and must be done to address this and look forward to working with her government as they explore what additional support they can give.” It revealed that Father Daniel, an Open Doors partner from Erbil, Iraq, had the opportunity to meet with Prime Minister Theresa May on Wednesday 13th December. The meeting, it said, came as a result of an Open Doors petition signed by 808,172 people from 142 countries, asking the UK government and the United Nations to ensure that Middle Eastern Christians and other minorities enjoy the right to equal citizenship, dignified living conditions and a prominent role in reconciling and rebuilding their society. It maintained that Father Daniel gave the Prime Minister the gift of an Arabic Bible, retrieved from a church in Karamles, Iraq, that had been burned by the self-proclaimed Islamic State. The survival of the Bible symbolises the hope which the Christian community in Iraq continue to hold on to. It disclosed that Lisa Pearce, CEO of Open Doors UK & Ireland, and Dame Caroline Spelman MP were also at the meeting. According to the release, Father Daniel, 27, a victim of persecution himself, was born during the Gulf War and was a teenager living in Baghdad when Al-Qaida threatened his family. In 2006, it said, he [Fr. Daniel] was forced to flee to Erbil or be killed for his Christian faith. He devoted his ministry to the displaced children who arrived in Erbil after Mosul fell to so-called Islamic State (IS) militants in 2014, it said. It said that Michelle Donelan, MP for Chippenham asked: “A recent report by Open Doors highlights the top countries that suffer horrific persecution against Christians. We need to take action and send a signal to other nations. These are countries which often are associated with luxury holidays. Will the Prime Minister consider earmarking a specific fixed percentage of international aid to go towards tackling religious persecution?” The World Watch List is an in-depth report, ranking of the 50 countries where it is most difficult to be a Christian, said the release, adding that this is produced using detailed information provided by Open Doors co-workers in more than 60 countries, as well as independent experts. It added that data is gathered on five spheres of life - private, family, community, national and church life – plus a sixth sphere measuring the degree of violence impacting Christians. It maintained that Persecution in each country is recorded by Open Doors using a point system. Open Doors' research methods and results have been independently audited by the International Institute for Religious Freedom. “The 2018 World Watch List accounts for the 12 months ending 31 October 2017.on the 50 countries of the World Watch List”, it said. The release stated that This year's report focuses on non-violent persecution, the way in which the law, media, state-sanctioned religions and social norms are used to clamp down on any expression of Christian belief. “Violence remains high – and grabs the headlines – but for most persecuted Christians it is non-violent persecution – the so-called 'squeeze' – which really threatens to suffocate their faith”, it deplored. Note Open Doors UK & Ireland is part of Open Doors International, a global NGO network which has supported and strengthened persecuted Christians in over 60 countries for over 60 years. Last year it raised approximately $70 million to provide practical support to persecuted Christians such as food, medicines, trauma care, legal assistance, safe houses and schools, as well as spiritual support through Christian literature, training and resources. Open Doors UK & Ireland raised over £11 million. About the writer: Sheraz Khan is a Pakistani-British journalist. He lives in Scotland. He can be contacted by e-mail: sheraz@btinternet.com