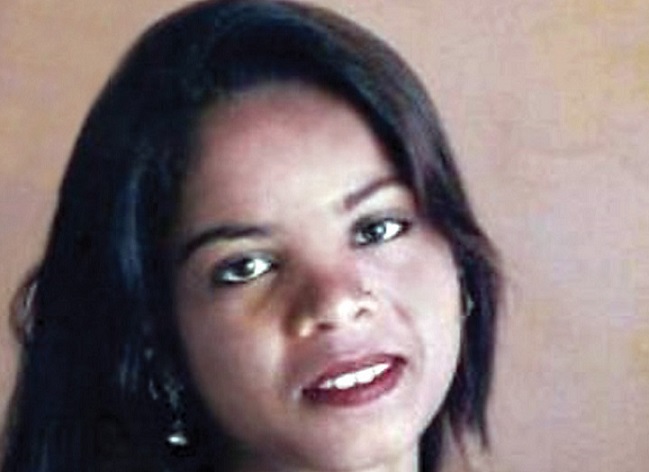 LONDON: February 24, 2018. (PCP) A UK based recently launched campaign, “Free Asia Bibi” has urged Christians around the world to pray during Lent for the immediate and unconditional release of a Pakistani Christian woman blasphemy-accused Asia Bibi, who has been on death row in Pakistan since 2010 after having been accused of having committed blasphemy by her the then women co-farm workers in 2009. A spokesperson of Free Asia Bibi Campaign (https://www.facebook.com/ReleaseAsia/) said: “Asia is in solitary confinement in a prison in Pakistan. She has five children. It is a shame that Asia continues to be behind bars despite passage of 8 years and 248 days”. The spokesperson went on to say that the situation surrounding Pakistan’s blasphemy laws has gone from bad to worse since a stringent version of the laws was introduced by the late military dictator General Zia-ul-Haq in the late 1980s. The Christians of Pakistan, the poorest of the poor, are economically marginalised, socially ostracized, and are denied due representation in the parliament and policy-making institutions, said the spokesperson. “Deep-seated discrimination against them means that they are denied jobs in public and private sectors. Most of Pakistani Christians live in slums, and work as janitors. Successive Pakistani governments have not made serious efforts to lift Christians, and other religious minorities, out of poverty.” said the spokesperson. “Consequently, they continue to be mired in abject poverty. The Christians of Pakistan and other religious minorities have little or no religious freedom. Blasphemy laws are frequently used to settle personal scores and vendettas.” Highlighting the ongoing abuse of Pakistan’s blasphemy laws, the spokesperson stated that there have been incidents in the past when the entire Christians villages or towns have been set to fire after it was rumoured that local Christians had committed blasphemy. Pakistani Muslims are also not immune from becoming victims of the blasphemy laws. Members of the Ahmadyia community [a minority Muslim sect], and other religious minorities, such as Hindus, have also been accused of having committed blasphemy, said the campaign’s spokesperson. Free Asia Bibi Campaign, the spokesperson stated, is profoundly concerned about the continued imprisonment of Asia Bibi. The spokesperson said: “We urge the international community to step up its efforts to get Asia Bibi released. We appeal to Members of Parliament (MPs) around the world to take up the issue of Pakistan’s Asia Bibi with the Pakistani authorities. We urge all Members of the European Parliament (MEPs) to make sure that Asia Bibi is released.” “A few days in prison can feel like a time forever. Asia Bibi has been in prison, year after year, and we are deeply concerned about her wellbeing, said the spokesperson. “How long she [Asia Bibi] will have to rot in prison before she is released? How long Asia Bibi will have to be in prison before she would be reunited with her family?” The spokesperson asked: “How long she will be condemned to be in prison before she could live and breathe as a free woman; a woman who is free of this label of a “blasphemer”, a woman who would have won her freedom of religion, thought and conscience.” Has she [Asia Bibi] not had enough punishment already for the “crime” she says she hasn’t committed?, the spokesperson questioned. When Asia Bibi was arrested her children were quite young now they have grown up without having the motherly love that every child needs when they are growing up, said the spokesperson. The spokesperson said: “Can we invite you to please pause and reflect, how miserable we would have felt if any of us, unfortunately, had to grow up in the circumstances Asia Bibi’s children were having to grow up?” The spokesperson stated: “We urge all mothers around the world to please pray for Asia Bibi. We urge all daughters on this planet to pray for the unconditional release of Asia Bibi. “Next time, when you go to your respective churches we appeal to you to lift Asia Bibi in your prayers. We appeal to all free men and women across the globe to pray for the release of Asia Bibi” No human being should be persecuted. We urge you to please commit to becoming advocates for this poor and illiterate woman who cannot speak for herself we, therefore, are reaching out to you so that you could speak for Asia Bibi., said the spokesperson. Note: You can follow Free Asia Bibi Campaign on Facebook: https://www.facebook.com/ReleaseAsia/ Free Asia Bibi Campaign can be contacted by e-mail: freeasiabibi@btinternet.com The campaign can be followed on Twitter @ReleaseAsiaBibi