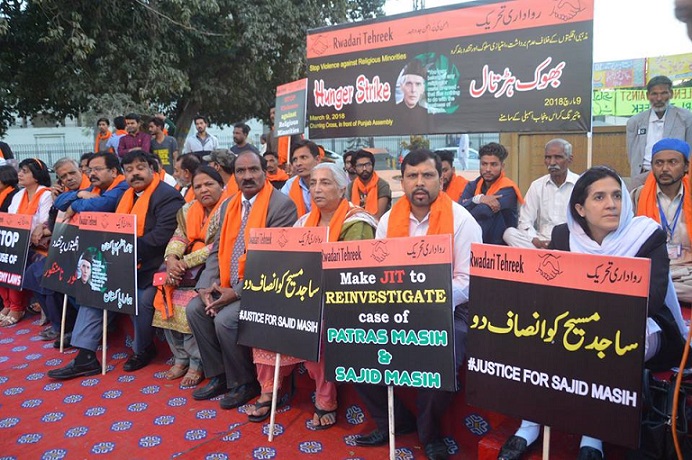 Lahore: March 10, 2018. (PCP) Rwadari Tehreek, a nationwide movement working to promote pluralism to counter hatred, violent extremism and terrorism organized a Hunger Strike on 9th March, 2018 in front of Punjab Assembly in Lahore to protest the frequent attacks on religious minorities in the pretext of Blasphemy allegations and demanded a policy and strategy to stop the misuse of Blasphemy Laws which is being used to hook the religious minorities into fabricated cases and their lives, worship places and other properties are being attacked. Citizens from different faiths and walks of life including religious, political and social leaders joined the Hunger Strike to express their concerns on the ill-treatment of minorities and to express solidarity with the victims, especially with Patras Masih and Sajid Masih who recently were subjected to torture and inhuman treatment during investigation with FIA which forced Sajid Masih to jump from the 4th floor of the FIA building. Sajid Masih is seriously injured and is under treatment at Myo Hospital Lahore. Prominent personalities who attended the Hunger Strike included Rt. Rev. Bishop Azad Marshal (Bishop of Raiwind Diocese), Rev. Shahid Miraj (Dean of Cathedral) Rev. Majeed Abel (Moderator Presbyterian Church), Pastor Emmanuel Khokhar (Senior Pastor Church of Pakistan), Saadia Sohail MPA (PTI), Shunila Ruth MPA (PTI), Mr. Peter Jacob (Executive Director Centre for Social Justice), Cecil S. Chaudhary (Executive Director NCJP), Adoo Ram (Member CEC Rwadari Tehreek), Sabira Asmat (Chief Organizer Rwadari Tehreek Punjab), Munir Ahmed Bhatti (President Rwadari Tehreek Lahore), Vickram Manzoor (General Secretary Rwadari Tehreek Lahore) and many others. Chairman Rwadari Tehreek Mr. Samson Salamat while addressing the Hunger Strike expressed deep concern over the deteriorating situation of religious minorities, especially the misuse of Blasphemy Laws. Mr. Samson Salamat said that the frequent incidents targeting minorities have deepened the feelings of threat, and terror among the members of minority communities which is not a healthy sign for Pakistan’s multi-religious society and the biased, discriminatory and hateful behaviour of the officials during investigation. Therefore, we call upon the Parliament, Judiciary and other responsible state institutions to intervene immediately to safeguard the marginalized religious minorities from further damage” Mr. Samson Salamat added. Mr. Abdullah Malik, the President of Rwadari Tehreek and Head of Civil Society Network said that all peaceful Pakistanis stand united with the religious minorities and will not allow any extremist group to use religion as a tool to threat and persecute them. Mr. Malik demanded that the Supreme Court should take immediate Suo Motu action on torture and ill-treatment of Patras Masih and Sajid Masih in custody and FIR against Sajid Masih for attempted suicide should be withdrawn. Sajid Masih himself has stated that attempted to escape from the physical and psychological torture while also being forced to sexually abuse his minor cousin”. The participants of the Hunger Strike unanimously demanded that - A Joint Investigation Team should be constituted for a fair, transparent, and credible re-investigation in case of Patras Masih who was booked on the allegation of Blasphemy at Shahdarah Lahore and his cousin Sajid Masih who was brutally tortured. - Those involved in torture and adopted hate mongering behavior during investigation of Patras Masih and Sajid Masih should be apprehended and brought to justice. - a proper medical care and security measures should be ensured to make sure fast recovery of Sajid Masih and safety of his life from further threat. - The minorities have suffered hugely due to the misuse of Blasphemy Laws and therefore the Provincial, Federal Government and all other stake-holders should formulate a policy and strategy to stop the misuse of blasphemy which has been used against minorities as a tool of persecution. - National Action Plan should come into action effectively and immediately and action should be taken against those individuals and groups who are involved in hate speech, and instigation and fueling of violence against religious minorities.