Rwadari Caravan 2018 Takes off and Pledges for a peaceful Pakistan 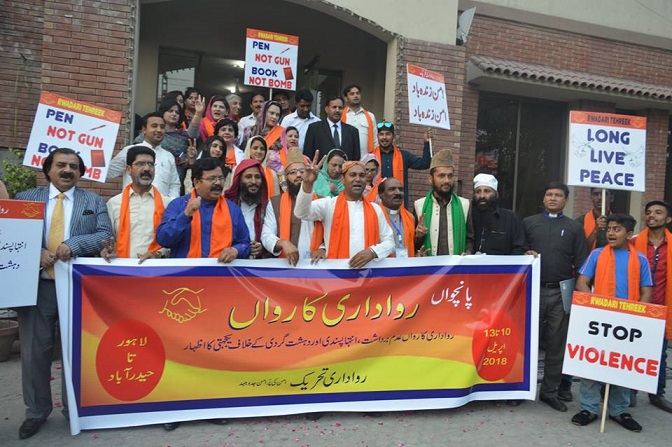 Lahore: April 10, 2018. (PCP) 5th Rwadari Peace Caravan of Rwadari Tehreek takes off in Lahore in an inauguration ceremony held at Lahore Press Club on April 9, 2018 with a pledge to continue struggle for a peaceful Pakistan. The Ceremony was hosted by Riffat Saud, Good- will Ambassador of Rwadari Tehreek Punjab and Fauzia Saeed, Core Committee Member of Rwadari Tehreek Lahore. Rwadari Caravan, which consists of Peace Activists of different faiths and walks of life from KPK, Sindh, Punjab and Baluchistan, and is aimed at expanding the scope of non-violence, religious tolerance and inter-faith harmony for a Peaceful Pakistan. Rwadari Caravan shall pass through different cities and places including Faisalabad, Multan, Bahawalpur, Rahim Yar Khan, Sukkur, Khiarpur Mirs, Moro, Shrine of Sachal Sarmast, Hala and finally will reach Hyderabad and hold a Rwadari Festival at Mumtaz Mirza Auditorium, Sindh Museum, Hyderabad on 13thApril, 2018. The Inauguration Ceremony which began with National Anthem and the official song of Rwadari Tehreek was presided over by Mr. Samson Salamat, the Chairman of Rwadari Tehreek while Ms. Saeeda Deep, Chairperson of Institute for Peace and Secular Studies was the Chief Guest. The other distinguished guests and Speakers included Abdullah Malik (President, Rwadari Tehreek), Saadia Sohail MPA (PTI), Allama Asghar Arif Chishti (Chairman Pakistan Sunni Ulema Council), Molana Muhammad Asim Makhdum (Executive Leader, Qul Masalik Ulema Board), Pastor Emanuel Khokhar (Senior Pastor Church of Pakistan), Hafiz Muhammad Hussain Golarvi (General Secretary, Sunni Ulema Council), Pastor Saleem Khokhar (Pastor of Diocese of Raiwind), Ms. Sabira Asmat (President Rwadari Punjab), Mr. Muneer Ahmed Bhatti, (President Rwadari Tehreek Lahore), Rukhsana Liaqat (Senior Vice President of Rwadari Tehreek) and Vickram Manzoor (General Secretary). In his opening remarks at the Inauguration Ceremony Chairman Rwadari Tehreek and Chief Organizer of Rwadari Caravan Mr. Samson Salamat said that “Rwadari Peace Caravan is a sign of our commitment that we will continue our struggle and efforts for a peaceful Pakistan and give a message to the people of Pakistan that they need to make efforts to undo this deteriorated situation and adopt the ways and means which can lead our nation towards a peaceful future. Peace is our Future and Not Violence”. Mr. Samson Salamat further said that “unfortunately our society is not in harmony with the vision of the founder of Pakistan, Quaid-e-Azam Mohammed Ali Jinnah who categorically promised in his speech to the Constituent Assembly on 11th August 1947 that all citizens shall be treated equally without any discrimination on the basis of cast, colour or creed and the religion will have nothing to do with business of the state. But Contrary to the vision of the Founder of Pakistan, our beloved country is surrounded with controlled democracy, limitations on freedom of religion, expression, assembly and association with mob violence triggered through Blasphemy allegations which continues to claim lives and cause damage to the settlements and properties of those belonging to religious minority communities”. Mr. Samson further added that “in addition to the frequent acts of terrorism which has practically paralyzed the Pakistani society and as a result we have lost thousands of life, the recent incidents targeting minorities have deepened the feelings of threat, and terror among the members of minority communities which is not a healthy sign for Pakistan’s multi-religious society”. Furthermore, the use of religion in politics and state affairs has deep rooted with the recent judgment by the Islamabad High Court which requires Faith Declaration for Pakistanis who are applying for Government Jobs to produce an affidavit declaring his or her faith”. Mr. Samson Salamat suggested that “In order to make Pakistan a strong, prosperous and peaceful country, a realization is badly needed amongst the state institutions, political forces, media, and civil society that Pakistan needs a quick overhauling to begin its reversal which is not possible without the sincere contribution and efforts of all sides. Strengthening democratic institutions, norms and values, improving governance, law and order and human rights situation should be a priority of every stake-holder which will not be possible without curbing the intolerance, violent extremism and terrorism. Furthermore religion should be separated from state affairs, action should be taken against the militant extremist elements and outfits as promised in the National Action Plan, syllabus should be made in accordance with the international human rights standards and free of biases, and last but not the least misuse of blasphemy laws should be stopped through a well thought legislative framework, policy and strategy”. Mr. Abdullah Malik said that "the terrorist outfits are a threat to the lives of people as they are involved in hate speech on the basis of sect and religion which is a matter of grave concern. Therefore, we call upon the government to take indiscriminate action against the individuals or the groups who are involved in terrorist activities and are killing people in the name of religion or sect". Chief Guest of the Ceremony, Ms. Saeeda Diep said that “these kinds of efforts should be maximized as these are the need of the time. This is a message for the people of Pakistan that we can bring peace in our society through religious tolerance and respect of diversity”. At the end of the Ceremony, the members of Rwadari Caravan pledged to continue their struggle across Pakistan to undo the culture of hatred, violence and extremism. Rwadari Tehreek (Movement for Pluralism) is a non-violent social movement which began in 2015 in Pakistan and aims to generate a debate on the importance of religious tolerance and respect of diversity in a multi-religious society and to remind the government, political forces, state institutions and other stake-holders their responsibilities to seriously address trends of hatred, violent extremism and intolerance in the society which has created an atmosphere of fear among the citizens and have riddled the public life, particularly of those belonging to religious minorities. Members of Rwadari Tehreek belong to different faiths and segments of the society and contribute their time and energy in promoting the aims and objectives of Rwadari Tehreek on voluntarily basis.