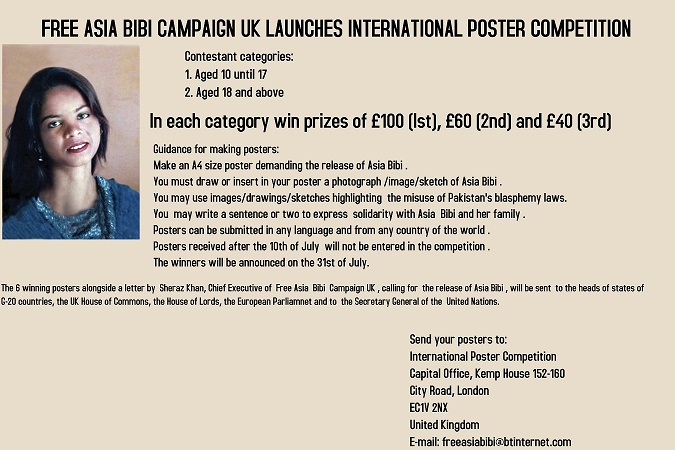 LONDON: April 26, 2018. (PCP) UK based Free Asia Bibi Campaign has launched an international poster competition to draw the world’s attention toward the plight of Asia Bibi, Pakistani Christian mother of five, who has been on death row in Pakistan since 2010 after having been accused of having committed blasphemy in 2009. Trouble began for Ms Bibi when she drank water from a glass which was owned by her former Muslim co-farmworkers. Ms Bibi and her women farm colleagues had a verbal altercation which was subsequently given a religious tinge and Ms Bibi was accused of having committed blasphemy. “Asia Bibi has been languishing in prison for 8 years and 307 days after having been accused of having committed blasphemy. We have launched an international poster competition to draw the world’s attention towards the prolonged incarceration of Asia Bibi”, said Sheraz Khan, Chief executive of Free Asia Bibi Campaign UK. Ms Bibi’s appeal is currently pending with Supreme Court of Pakistan although Mian Saqib Nisar, the Chief Justice of Pakistan has recently stated that the Supreme Court will soon fix a date for Ms Bibi’s hearing. Mr Khan stated that the competition invites applications from two categories: people aged 10 until 17 and people aged 18 and above. “We urge people from around the world to send posters to us. Please express your solidarity with Asia Bibi by making a poster”, said Mr Khan, who has written extensively on Christian persecution and has recently delivered a petition addressed to Prime Minister Theresa May at 10 Downing Street to draw Mrs May’s attention, among other issues, towards the plight of Asia Bibi. Mr Khan stated that anyone anywhere in the world could send a poster to Free Asia Bibi Campaign UK, adding that posters sent for the competition must have an image or a manually drawn sketch of Asia Bibi. “The posters must call for the release of Asia Bibi. You could draw or use images highlighting the misuse of Pakistan’s blasphemy laws”, said Mr Khan. Mr Khan stated that in each of the two categories prizes worth £ 100 (1st) £60 (2nd) and £40 (3rd) would be awarded to the winning contestants. He went on to say that the last date for submitting an entry for the poster competition is the 10th of July, adding that the winners of the contest will be announced on the 31st of July. Mr Khan stated that the winning posters will be sent alongside a letter written by him to the heads of states of G-20 countries, the UK House of Commons, the House of Lords, the European Parliament and the Secretary General of the United Nations. The letter, he stated, will call for the release of Asia Bibi. Mr Khan urged churches all over the world to pray for Asia Bibi, and encourage their congregants to participate in the poster competition. “I would like to reach out to all church leaders, church pastors, Christian brothers and sisters, ministries, Christian and human rights organisations to invite them to participate in the poster competition” Journalist and human rights activist Mr Khan said that he was profoundly concerned about the misuse of Pakistan’s blasphemy laws. Pakistan’s blasphemy laws are not only being abused to target Christians and other religious minorities but Pakistani Muslims are also being implicated in false blasphemy cases, he said. Mr Khan urged the Pakistani authorities to put in place measures aimed at stopping the misuse of the blasphemy laws. Entire Christian residential settlements, churches and even people have been burned to death on accusations that Christians had committed blasphemy. In 2013, Joseph colony, a Christian residential area in the Pakistani eastern city of Lahore was set on fire after it was rumoured that Christians had committed blasphemy. At least 1000 people fled their homes in Shahdrah, a town near Lahore, when a Patras Masih, a young Christian man was accused of having committed blasphemy. Sajid Masih, Patras Masih’s cousin, was allegedly tortured and forced to sodomise his cousin whilst the two men were being investigated by Pakistan’s Federal Investigation Agency (FIA). Sajid Masih refused the “orders” and instead jumped off the window of the fourth floor of the FIA building in Lahore. Sajid Masih sustained critical injuries and is now receiving medical treatment at an undisclosed hospital in Pakistan. Mr Khan urged the international community to step up its efforts aimed at getting Ms Bibi released. “Alongside Ms Bibi all people who are rotting in Pakistani prisons after having been accused of committing blasphemy must be immediately and unconditionally released”, said Mr Khan.