The UK funds a consultative workshop on disability inclusion in Pakistan 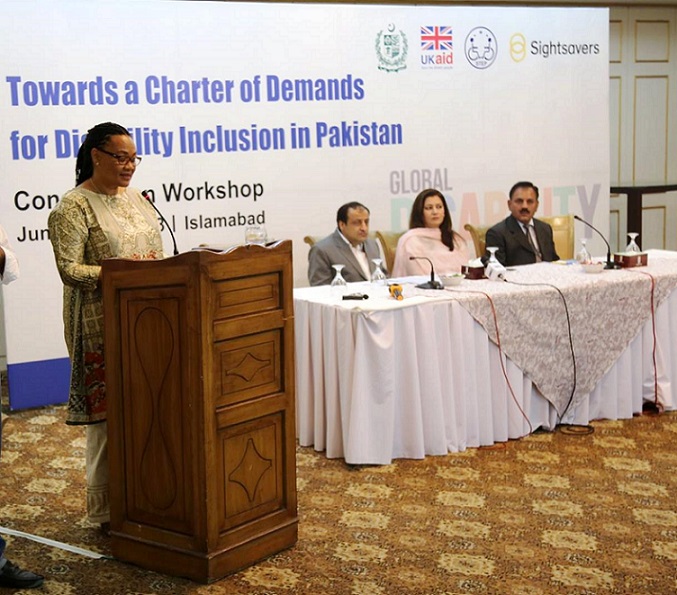 Islamabad: June 28, 2018. (PCP) The UK’s Department for International Development (DFID) has funded a two-day consultative workshop on disability inclusion in Pakistan. The consultation concluded today was organised in connection with the Global Disability Summit which will take place on July 24 in London to mobilise global commitments on disability. The workshop was organised in collaboration with the Special Talent Exchange Programme (STEP) and Sightsavers to involve the government, Disabled Persons Organisations (DPOs) and Non-government Organisations (NGOs) to develop a set of demands and recommendations to improve the lives of those with a disability. The broad range of stakeholders participated in the workshop and agreed on a Charter of Demands which will serve as the basis of action for disability inclusion. The workshop had panel discussions on four themes; tackling stigma and discrimination, inclusion in education, routes to economic empowerment and harnessing technology and innovation which were facilitated by four experts including leaders of persons with disabilities. Speaking at the opening session of the workshop, Deputy Head of DFID Pakistan Kemi Williams said; “Disabled people have an important role to play in their countries’ development. The UK Government is pleased to work with the Government and the people of Pakistan to make sure that your collective role in promoting the right opportunities for people with disabilities is recognised, and your voices are heard. Giving his remarks, Joint Secretary Ministry of Planning, Development and Reforms said; “The Global Disability Summit being organised in the UK will act as a starting point to raise focus on the neglected issue of disability. Towards the vision 2025, we aim to provide an enabling environment for people with disabilities for the development of their full potential by developing a coherent strategy between the federation, provinces and all other stakeholders in Pakistan.” Addressing the workshop, Executive Director STEP Mr Muhammad Atif said; “In most of the developing countries, persons with disabilities are treated as medical patients. We need to establish a rights based approach rather than a charity based model to mainstream people with disabilities." Speaking at the event, Country Director Sightsavers Munazza Gillani said;“The sustainable development goals (SDGs) can only be achieved for all, when implemented under the framework of UN Convention on the Rights of Persons with Disabilities, which was ratified by Pakistan in July 2011” The workshop was attended by the Joint Secretary Ministry of Planning Mr Syed Tariq Mahmud, Secretary Social Welfare Balochistan Mr Sikandar Shah, CEO Pakistan Poverty Alleviation Fund Mr Qazi Azmat Essa, Secretary CADD Mr Azhar Ali Chauhdry and Country Director Sightsavers Ms Munazza Gillani amongst other people from various Disabled Peoples Organisations (DPOs), civil society, government departments and donors. Mr Mazhar Siraj, Team Leader Economic Inclusion and Poverty, DFID Pakistan briefed the participants about the role of Pakistan in the Global Disability Summit. DFID will co-host the first ever Global Disability Summit in London with a commitment to transform the lives of people living with disabilities in July. The Summit is expected to bring together Government Ministers, heads of donor agencies and civil society organizations and CEOs of private sector companies. The aim is to generate sustainable commitments from developing country governments, donors, civil society, foundations and the private sector.