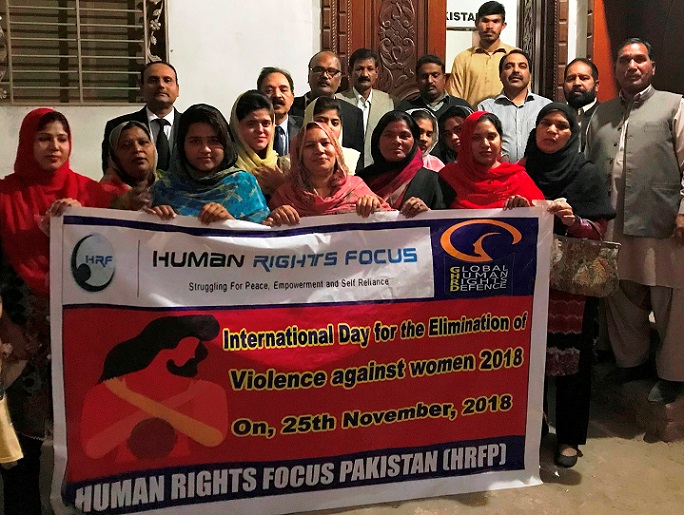 Lahore: November 25, 2018. (PCP) Human Rights Focus Pakistan (HRFP) in collaboration with Global Human Rights Defense (GHRD) organized an event on International Women's Day 2018 for the Elimination of Violence against Women. The representatives of civil society organizations, women activists, political workers, social activists, HRD's, lawyers, teachers, youth and students participated to end violations against women. Naveed Walter, President of Human Rights Focus Pakistan (HRFP) raised the issue, root causes and recommendations for the Elimination of Violence against Women, particularly the female child marriages, domestic violence, incidents of acid throwing, stove bursting, burnings, honor killings, trafficking, sexual and mental harassments. He said further that intimate partner violence (battering, psychological abuse, marital rape, femicide) is in routine and the sexual violence and harassment (rape, forced sexual acts, unwanted sexual advances, child sexual abuse, forced marriage, street harassment, stalking, cyber- harassment) are common practices in society. The human trafficking (slavery, sexual exploitation), female genital mutilation and child marriages are commonly faced by women, he added more. Ms Nusrat Samuel (Women Activist) shared that women acknowledged to United Nations that the human rights activists observed 25 November as a day against gender-based violence since 1981. The women feel honor that since 7 February 2000, the General Assembly adopts resolution 54/134, officially designating 25 November as the International day for the Elimination of Violence Against Women and in doing so, inviting governments, international organizations as well as NGOs to join together and organize activities designed to raise public awareness of the issue every year on that date. Ms. Naseem Haroon (Political Worker), Ms. Nighat Mumtaz (Women Activist), Ms. Saba (Teacher), Ms. Shanaila (Athlete ), Ms. Minahil (Student), Ms. Suneeka (Beautician), Rev. Kanwal Sohail (Activist), Mr. Naveed Zafar (Advocate), Mr. Robin Daniel (Political Worker), Mr. James Lal (Educationist), Mr. Raja Thomas (Social Activist), Mr. Manzoor Anthony (HRD), Mr. Ijaz Bhatti (Teacher), Mr. Shadman John (Program Coordinator HRFP) and others were highly concerned about alarming figures that why the 1 in 3 women and girls experience physical or sexual violence in their lifetime, most frequently by an intimate partner , that why only 52% of women married or in a union freely make their own decisions about sexual relations, contraceptive use and health care, that why even the worldwide, almost 750 million women and girls alive today were married before their 18th birthday; while 200 million women and girls have undergone female genital mutilation (FGM) , that why the 1 in 2 women killed worldwide were killed by their partners or family; while only 1 out of 20 men were killed under similar circumstances , that why the 71% of all human trafficking victims worldwide are women and girls, and 3 out of 4 of these women and girls are sexually exploited , that why the violence against women is as serious a cause of death and incapacity among women of reproductive age as cancer, and a greater cause of ill health than traffic accidents and malaria combined, that why the world and Pakistani authorities are not taking serious actions to combat this alarming situation; the speakers added. The screening of the Video Documentary, "The Trapping Faiths" was also arranged during event and the all participants endorsed the recommendations jointly including to end-up the abductions, forced conversions and forced marriages of minority girls which was raised in video documentary through 4 case studies of Hindu and Christian girls, as the numbering are growing day by day. The speakers urged that state must ensure victims & families safety & security measures and the violence of all forms should be eliminated, HRFP recommended further.