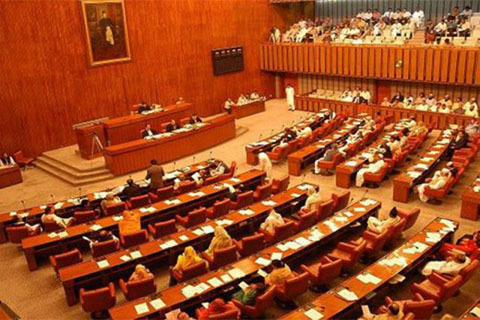 London: May 1, 2019. (PCP) The Pakistani Senate has passed a bill to amend the Child Marriage Restraint Bill, 1929, and set the minimum marriage age at 18 years.

The bill aims to “curb the menace of child marriage prevalent in the country and save women from exploitation”.

Underage marriage can lead to a sentence of up to three years in prison, a fine of at least Rs100,000, or both.

Senator Sherry Rehman, who presented the bill, was greeted by opposition from members of Islamist parties.

Some argued that fixing the age as 18 was inconsistent with Shariah law, while others objected on the grounds that ulema had not been consulted.

While urging the Senate to vote of the bill, Sherry Rehman said since the age of voting and eligibility for a national identity card (NIC) is 18, the age of puberty should also be fixed accordingly.

After debating on the bill, the Senate chairman sought voting and passed the bill with the opposition of five votes.

He said: “I would like to congratulate all the political parties and their representatives who supported this bill.

Mr Saeed said the main beneficiaries of this would be religious minorities who have concerns that their underage girls are kidnapped, forced to convert to Islam and then marry their kidnappers.

Mr Saeed especially thanked the Pakistan Peoples Party and Sherry Rehman, saying the party has always looked after the religious minorities’ interests and stood for their rights.

Mr Saeed said: “The passing of this bill is a great thing, but the implementation will be equally important and if the government fails to implement this law like it has with serval other laws, then people won’t benefit from it.

Especially the minorities who are very concerned about their daughters being kidnapped, forced to convert and then marry their kidnappers against their will.”