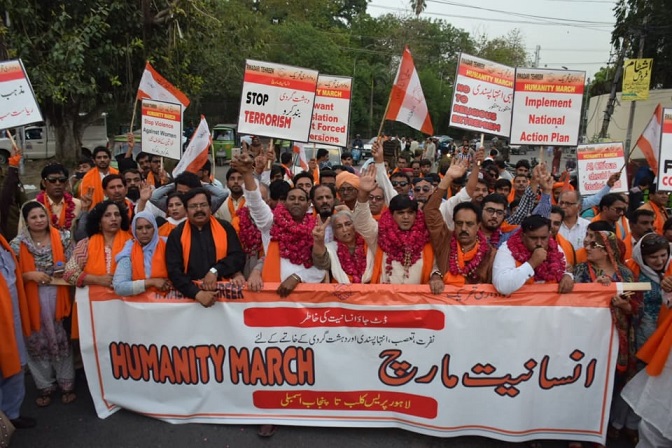 Lahore: May 1, 2019. (PCP) Peace Caravan of Rwadari Tehreek- Pakistan which began on 24th April with an Opening Ceremony at Karachi, the biggest city of Pakistan and passed through 25 different cities and ended at Lahore, the 2nd biggest city with a “Humanity March” held on 27th and a Grand Rwadari Festival on 29th, 2019.

Peace Caravan is an Annual feature of Rwadari Tehreek, which brings together thousands of people of different faiths, languages, cultures, `ethnicity and it traveled from one province to another, one city to another to mobilize people in favour of peace, pluralism and interfaith harmony to weed out prevalent culture of hatred, extremism and terrorism deep rooted in the Pakistani society.

Peace Caravan which traveled almost 2000 kilometers by road held anti-extremism public rallies in different cities such as Hyderabad, Saeedabad, Ranipur, Sukkur, Ghotki, Rahim Yar khan, Bahawalpur, Multan, Faisalabad, Kasur.  During Caravan on 26th April an Anti-forced Conversion Protest Rally was held at Ghotki, the city which is known for most of the incidents of forced conversions and “Humanity March” on 27th of April, 2019 which began from Lahore Press Club and ended in front of Punjab Assembly.

On 28th April Rwadari Caravan visited the shrine of one of the most famous Punjabi Sufi Saint & poet Baba Bullay Shah, known for his pro-humanity and pro-interfaith poetry in South Asia.

To conclude Peace Caravan, a Grand Rwadari Festival was held at Ali Institute Auditorium Lahore on 29th April, 2019 to celebrate the success of the movement, through sufi and folk music & dance, theatre which displayed the togetherness of the all the members of Rwadari Tehreek gathered in thousands from all over Pakistan to pledge to continue their struggle to for peaceful Pakistan.

Following Declaration was issued during Caravan:

·   Faith and Religion should be considered as a private matter and should be kept separate from state affairs and should not be used in politics.

· The principal of Equal citizenship should be adopted and all forms of discriminations on the basis of religion, sect, social status or in any other basis should be ended to ensure equality among citizens.

·   In accordance with National Action Plan, action should be taken against the militant extremist elements and outfits involved in hate speech and violent terrorist activities.

Furthermore, syllabus should be made in accordance with the international human rights standards and free of all forms of biases and misuse of blasphemy laws should be stopped through a well thought legislative framework, policy and strategy”.

· Keeping in view the frequent threats and killings to the working journalists and the human defenders, a comprehensive policy should be developed in consultation with relevant stake-holders for the safety and security of the journalists and human rights defenders.

· All forms of discrimination and violence against women should be ended through proper legislation and policies in the light of CEDAW Convention, especially the legislation should be made to criminalize forced conversion, domestic violence and to control early child marriages.

· Provinces should be granted their due rights, share and resources in accordance with 18th Constitutional Amendment and the grievances of the people of Sindh, Baluchistan, Khyber Pakhtoonkhwa and Seriki Wasaib should be addressed through a dialogue process.

Rwadari Tehreek (Movement for Pluralism) is a non-violent social movement which began in 2015 in Pakistan and aims to generate a debate on the importance of religious tolerance and respect of diversity in a multi-religious society and to remind the government, political forces, state institutions and other stake-holders their responsibilities to seriously address trends of hatred, violent extremism and intolerance in the society which has created an atmosphere of fear among the citizens and have riddled the public life, particularly of those belonging to religious minorities. Members of Rwadari Tehreek belong to different faiths and segments of the society and contribute their time and energy in promoting the aims and objectives of Rwadari Tehreek on voluntarily basis.