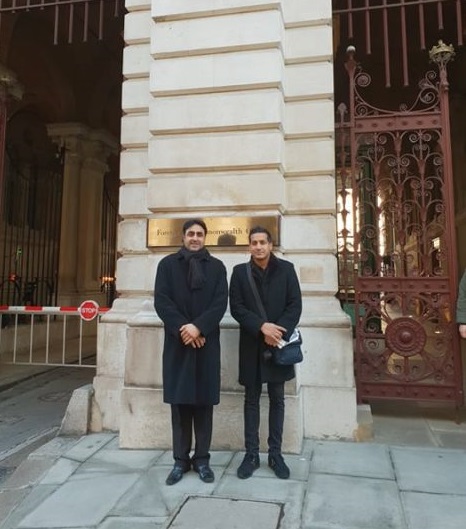 London: July 9, 2019. (PCP) British Asian Christian Association welcome the release today and findings of the final report of the Independent Review - established by the Rt Hon Jeremy Hunt MP, HM Secretary of State for Foreign and Commonwealth Affairs and chaired by the Bishop of Truro, Rt. Rev. Philip Mounstephen – which have sought to map the extent and nature of the global persecution of Christians; to assess the quality of the response of the Foreign and Commonwealth Office (FCO) and to make recommendations for changes in both policy and practice. We commend the manner in which information was gathered for the report and key church groups and non-government organisations (including the British Asian Christian Association) were consulted for their views.

We are pleased to see that many of the concerns that we presented to the Independent Review team - through the findings of our published 490 page book ‘Call it by its name – Persecution!’ (authored by Desmond Fernandes, a former senior lecturer at De Montfort University) and through points raised by Wilson Chowdhry, chair of the BACA, and Desmond Fernandes in an invited presentation - have been considered and held to be valid concerns that the government and FCO need to confront and address if they wish to genuinely assist persecuted people and communities.

Although generally unreported in the mainstream British press coverage of the findings of the Independent Review, we are especially pleased to see, with respect to its case study assessment of Pakistan, the recommendation that UK “FoRB [right to freedom of thought, conscience, religion or belief] policy should be reconsidered. This policy is no doubt closely tied to HM Government policy” – i.e. the ‘hostile/compliant environment’ policy – “in relation to the application of asylum law to those whose vulnerability is defined by their religious faith. Whilst this policy remains unchanged in Westminster and Whitehall, the High Commission's ability to provide support to Pakistan's vulnerable religious minorities will remain fettered”. Just how it will “remain fettered” is addressed in detail in our recently released book ‘Call it by its name – Persecution!’

As we detail in our book, the Home Office's most recent September 2018 'Country Policy and Information Note' on 'Pakistan: Christians and Christian converts' - which UK and UNHCR (the UN’s Refugee Agency) decision makers rely on for 'guidance' in determining the 'refugee status' of Pakistani Christian asylum seekers – scandalously asserts that “Christians in Pakistan are a religious minority who, in general, suffer discrimination, but this is not sufficient to amount to a real risk of persecution”.

This Home Office determination flies in the face of a large number of publicly available assessments and findings by numerous human rights organisations, academics, parliamentarians, Pakistan assembly members, public interest bodies, Church organisations and community representatives, investigative journalists and lawyers. These are all extensively documented and referenced in our book.

Open Doors, for example, in its 'World Watch List', ranks Pakistan at number 5 in its list of the 50 countries where Christians experience the 'most extreme' levels of persecution. The effect of this government approved Home Office ‘hostile/compliant environment’ policy is to scandalously deny the reality of persecution that many Christians (and targeted ‘Others’) suffer from in Pakistan. In so doing, it ensures that persecuted Pakistani Christians, alongside 'Othered' asylum seekers, have become mere 'bargaining chips' in cynical 'deep political'[ii], currently stands at 86%.

The Independent Review’s case study relating to Pakistan further notes with alarm that “evidence was taken from individual Catholic priests and nuns who had repeatedly had their visa applications [to the UK] refused ... Another senior priest who has travelled on numerous occasions to other European and northern American countries has now had his visa applications refused three times by the UK visa application regional hub in Abu Dhabi ... These repeated difficulties are both surprising and point to potential discriminatory behaviour by the regional hub. This experience of apparent repeated discriminatory behaviour undoubtedly undermines the reputation of the UK Government in the minds of the minority Christian community”.

As our book reveals, the above “repeated difficulties” which the Bishop of Truro’s review team found “both surprising” and pointing towards “potential discriminatory behaviour” actually stem from a scandalous UK government immigration policy that does explicitly discriminate against nationals from Pakistan (as well as other select countries) by placing them on a secret 'list'. Our book reveals that Mansouri and Son, a solicitors and law firm, has confirmed that “the UK Border Agency has drawn up” a “secret list” which “is not available publicly and Entry Clearance Officers are explicitly forbidden from disclosing the existence of the list”.

This 'secret list', human rights lawyer Shahram Taghavi points out, scandalously “not only offends against the established fundamental human rights principle of not discriminating on the grounds of nationality or race, but also violates a cardinal principle of the rule of law, the principle that laws must be accessible to citizens”. This policy, when placed within a wider framework that is outlined in our book, is shown to sit alongside others that have targeted the Windrush generation and Chagossian islanders.

We hope the government will reflect upon the Independent Review’s contention, with regard to Pakistan, that “without a significant change of direction, the protection of vulnerable minorities, a central tenant of FoRB, will continue be undermined ... UK Government financial support over the past two decades for mainstream education in Pakistan” has also been substantive. Any continued funding in this area needs to be sensitive and pay heed to the fact that “radicalised content in text books that constitutes hate crimes, continues to undermine inter-community relations at the local level around the country and in some circumstances fuels religious extremism. It remains important that the protection of minorities, through the pursuit of the FoRB agenda, is not undermined in this way”.

We also hope that the government and related policy analysts will draw useful insights and reflect meaningfully upon the Independent Review’s assessment that, during “the 1990s, very significant assistance was provided to support Christians [questionably] accused of blasphemy during the[ir] legal proceedings [in Pakistan]. This extended to the resettlement in the UK of a number of highly vulnerable Christians so accused ... [But] since the reestablishment of democratic government, however, the High Commission does not appear to have resumed direct advocacy [of providing refugee status and sanctuary of this kind to those fleeing persecution in Pakistan] .... This approach is consistent with ... the decision by HM Government not to offer asylum to Asia Bibi and her family ... [However], given the very successful former practice of direct intervention in the 1990s in support of vulnerable Christian communities, this aspect of FoRB policy should be reconsidered”.

This need to urgently reconsider FoRB policy is also something that we have been calling for (For full details, refer to our book ‘Call it by its name – Persecution!’). Indeed, we support the basis of the recent appeal by Cardinal Vincent Nichols and the Archbishop of Canterbury that the scope of the Bishop's government-backed inquiry should now actually “be expanded to include departments beyond the FCO” such as “the Department for International Development (DFID), the Department for International Trade, the Cabinet Office, the National Security Council and the Home Office. ‘The government’s work promoting FoRB should not be seen as an isolated strand of diplomatic activity, but incorporated into aid, trade, resettlement, asylum and security policy’, they wrote”.[i] 'Deep politics' is defined by Peter Dale Scott as “all those political practices and arrangements, deliberate or not, which are usually repressed rather than acknowledged” - Scott, P. D. (1996) Deep Politics and the Death of JFK. University of California Press: Berkeley and Los Angeles, p. 6, 7. Further clarification of this view, notes Rachel Weber, “comes with his definition of deep political analysis: ‘looking beneath public formulations of policy issues to the bureaucratic, economic and ultimately covert and criminal activities which underlie them’” - Weber, R. (undated) ‘Peter Dale Scott's Deep Politics’ (accessed at: http://mcadams.posc.mu.edu/scott.htm).