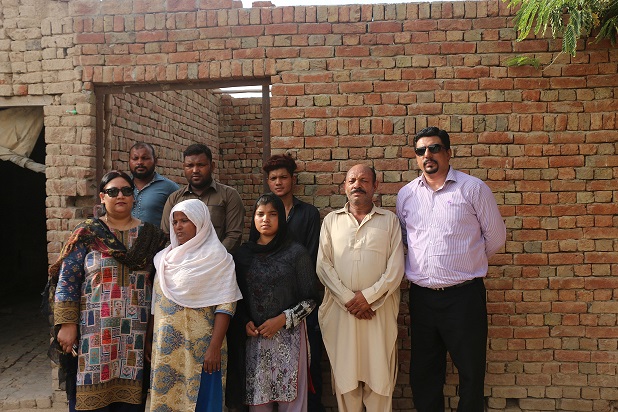 Lahore: July 9, 2019. (PCP) Sunny Waqas is a 19 years old student of High School doing Intermediate in Health sciences. Sunny was held accused of Blasphemy 295 C, and the sentence/punishment of which is Death, after having a slight dispute with his fellow Muslim neighbors on Cricket match. The allegation in First Information Report states that he was arrested on 29th June 2019 at about 10:50 pm when he was carrying a black bag holding the printed blasphemous sketches of the Holy Prophet. It further states that an informer told the police that Sunny waqas has printed some blasphemous material and is now on his way to show the other people. When police arrested him they recovered the blasphemous sketches and Sunny told them that these sketches were sent to him by his cousin and he was going to show them to his friends and other people. The family contacted The Voice team and told us about the situation and requested help from The Voice. The Voice team left for fact finding to Bahawalnagar about 450 kms away from Lahore.

Statement of Mushtaq Masih (Sonny’s father): Mushtaq Masih told Adv. Aneeqa that Sunny is a bright student and is also a fond of cricket. He plays cricket in his free time, few days ago he had a minor dispute with his fellow Muslim players including Bilal Ahmad and they stopped playing afterwards. Then on 29th June at about 5:30pm he was playing along with his friends at the back side of their house, when the police came and arrested him. They did not told us anything about this arrest and when we reached the police station of their territory, the police told them that they did not arrested any sunny and they should check any other police station. Next morning i.e. on 30th June they came to know that he is in Bahawalnagar Jail and the police have lodged a case against him for Blasphemy.

Statement of Sunny’s Mother: Sunny’s mother told The Voice team that Sunny had many Muslim friends, and he can never do anything to hurt the feelings of any one. He’s an obedient son and is very sensitive towards the inter-faith and inter- religious issues.

The Voice’s fact-finding team concluded from our fact finding that a person named Bilal Ahmad out of the group of Sunny’s friends have satisfied his grudges against him and reported against him a fake story upon which the Police made a fictitious case against him as there was no evidence a part from this self-made story. The Voice team met Sunny Waqas in District Jail Bahawalpur and assured him that Justice will be served to him and he will be out of Jail soon. The Voice legal team will wait for the investigation to be completed by the police once than we will be able to update you about the parameters of this case. So far The Voice team have joined investigation and we are very optimistic that like other cases Sunny Waqas will also find Justice soon with the efforts of the Voice team.