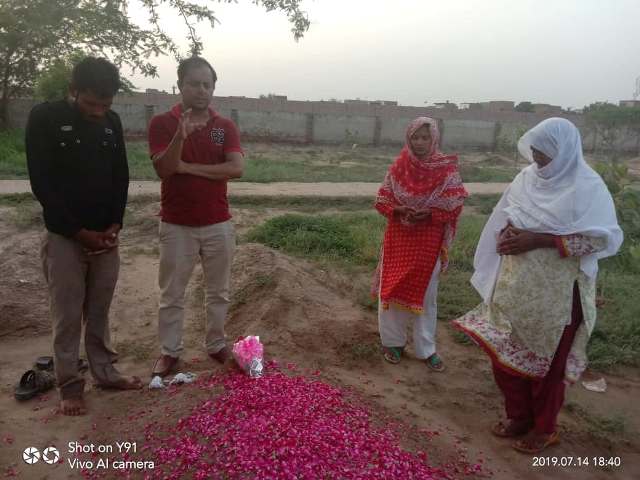 Faisalabad: July 20, 2019. (PCP) A ten-year-old Christian child who chose to work in a dangerous scrap factory so he could support his mother who had to fend for a family of two boys and a drug-addict husband, was raped and tortured before being killed by his Muslim employers.

Mohammad Akram and Irfan, nicknamed Kalo, were both arrested in Sarghoda on the 14th July, for the murder of Badil Shahzad, from the viallage of Rasheedabad in Essa Nagri, Faisalabad.

Badil, the son of a drug addict Shahzad Masih (42 yrs) took a job working for Mr. Akram at his scrap metal dealership for 100 rupees (50p) a day, less just 10 days earlier to help with his family meet their daily living demands.

Mr. Masih became a burden on the family finances trying to feed his drug habit as the boys’ mother, Sharifa Bibi (40 yrs) was working as a maid earning only 3500 Pak rupees (£23) per month. Realising there was no other option Badil took it upon himself to look after his family by finding work just as the holidays began at United Presbyterian School in Essa Nagri where he attended.

BACA National Executive Mehwish Bhatti met with Sharifa Bibi who explained that her son was eagerly awaiting the summer holidays in order to commence his job search, his only desire was to be a helping hand to his mother. Even though Badil was for all intents and purposes a very small child, he was astute enough to notice what was going on within their household and would often discuss matters of finance with his mother like a responsible grown up. Sharifa, said: “I worked hard for many hours just for the sake of my two sons so that they would not have to suffer as I have suffered without education.

"My son Badil couldn’t bear to see the struggle of his mother and insisted on working to help the family - despite my insistence that he avoid work till he was older.”

Every morning Badil was required to travel for ½ km by foot to get to his his workplace for his meagre pay. Despite his tender age he was required to begin work at 9am and would not return home till gone 6 or 7pm dependent on how quick he was able to complete his tasks. Akram soon began to work longer hours, without extra pay, as his employers began to exploit his good character and exhibited endeavour after noticing his ability within his first day at work.

“Badil was such a responsible son.

"Daily before leaving for work he asked me what should bring in the evening from his wages.

"I insisted that he kept his money for himself, but he brought groceries like sugar, rice, flour, ghee daily.”

Two days before his murder, Badil came home later than normal with only half his promised wage, which infuriated his mother. Sharifa scolded Badil and told him not to return to work the next day, suggesting he start his summer holiday homework instead which would improve his future prospects.

Badil’s mother had never wanted her son to work she always felt he should concentrate on his studies and use a good education to lever their family out of severe poverty.

Badil however was adamant he would go back to work, he hoped by working hard his employer would pay the appropriate wage. His wages did return back to normal levels after the 8th of July but he was never compensated fir the low wages of that day. On the 10th of July Badil travelled to work with his younger brother, Moon (9 yrs) who had helped once before. Moon was never paid for his work as officially it was Badil's employment.

Moon recalls “as we reached the store, we both started picking up scrap and got busy in the job.

"When Mr Akram came to the store around 5pm he started abusing Badil complaining that the work had not been completed on time.

"Badil replied in like to him and told him that he might not return the next or proceeding days as he was not being paid enough for the labour intensive tasks he was undertaking.”

“As Mr Akram heard this he ran to hit Badil but Badil ran from the shop and Akram gave chase.

"However, A friend of Akram was standing nearby on his motorcycle and told Akram to sit behind him, then both men chased Badil till they caught up with him.

"Akram then got off the motorcycle and dragged Badil back to the store.”

Moon told BACA that whilst witnessing the attack on his brother he simply continued with his work out of fear.

“They took Badil inside the store which is full of scrap.

"For half an hour I was completely unaware of what was happening with Badil inside.

"Eventually both men came outside and pretended as if nothing had happened inside.

"I thought my brother had also left the store from another exit so I went to look for him.

"I searched vigorously for 15 minutes and then saw my mother, so I rushed to her to tell her what had happened."

At around 6pm Sharifa Bibi returned home from work and noticed neither of her sons were at the house. She went to the shop to look for them and upon seeing his mother approach, Moon rushed to tell her what had happened, and they continued to search for Badil together.

After a few hours they returned home to see if Badil was there. To their surprise they could see from a distance that Badil was lying in their courtyard so they shouted out to him. When he did not respond they rushed to see why he was so non-reactive. At first Sharifa thought he was simply tired from a hard day's work and the ignominious beating of his employer. However, when she got up close she realised he was unconscious and barely alive. At this point the whole situation was too much to bear for Sharifa who began to scream and wail hysterically.

On hearing the screams local neighbours gathered and offered assistance soon witnesses began to notice injuries on Badil’s right hand and observed that he had a very swollen red face. After calling a doctor Badil was taken to Allied Hospital Faisalabad where he was admitted to Intensive Care as a medical team diligently tried to revive him. Sadly only 7 hours later at 1:30 am Badil was pronounced dead having succumbed to the impact of his injuries.

The family are being comforted and supported by BACA representative, Mehwish Bhatti, in their grief and in their search for justice.

‘’Badil lived a life of poverty and has been killed simply for working to hard and asking for just reward.

"His tormentors and exploiters knew he was a Christian and used that to treat Badil as they wanted, but his vulnerability in life will be his strength in heaven, as this church-attending young child always retained his love for Christ gaining him entry to heaven.

"The evil men who beat this young child must be brought to justice so that they cannot deliver their evil actions on any more innocent children.

"I remember the brutal murder of Christian domestic servant Shazia Bashir a child of a similar age who was murdered by her cruel employer.

"Shazia Bashir was raped and beaten daily by her employer Mohammed Naem a former Lahore Bar Association Chairman and his son (click here).

"Her trial was a farce and after paying a bribe Mr Naem was set free - but not before lawyers smashed police vehicle and courts stating no-one from the legal fraternity could be prosecuted (click here).

"I pray that the Pak-Justice system shows more moral fibre towards Sharifa and her family."

"That child labour still exists, is immensely profuse and is so brutal is a blight on the reputation of Pakistan.

"Employers for decades have exploited young children in Pakistan - none more so than Christian children who are targeted as they live in the most impoverished and isolated communities.

"Article 11,3 of the Pakistan constitution outlaws the employment of children in dangerous environments, but breaches of the constitution are ignored in the main and penalised lightly when prosecution does rarely take place.

Article 11.3 of the Constitution of Pakistan says " No child below the age of fourteen years shall be engaged in any factory or mine or any other hazardous employment." Similar safeguards have been provided in Article 37of Constitution. Section 50 of Factories Act 1934 reads as under: "Prohibition of employment of young children. - No child who has not completed his fourteenth year shall be allowed to work in any factory."

"Moreover, the Employment of Children Act 1991 and various other provincial acts prevent any Labour for children unless aged 12, supervised by a parent and for no more than two hours.

"It is not the creation of laws that change society but their effective implementation, which Pakistani Authorities have sadly exhibited little appetite for."

Ghulam Mohammadabad Police initially completed a First Information Report (FIR#1132/19) at the hospital at the behest Sharifa, who named Mohammad Akram and Irfan as suspects on murder charges under Section 302 of the Pakistan Penal Code. After the FIR was registered the police followed up with the arrests of both culprits. The men had fled their homes and were hiding in the neighbouring city of Sarghoda but were caught after witnesses recognised their images that had been plastered on posters.

A post-mortem conducted on the corpse of Badil while at the Allied hospital revealed that he had been subjected to a sustained ferocious attack to the head and had received multiple injuries over his body.

Moon has been traumatised following his brother’s death and hasn’t left his house since and often screams in terror thinking the men responsible will take him too.

• Article 11(3): No child below the age of 14 years shall be engaged in any factory or mine or any other hazardous employment.

• Article 25(A): The state shall provide free and compulsory education to all children of the age of five to sixteen years in such manner as determined by law.

• Article 37(e): The state shall make provision for securing just and humane conditions of work, ensuring that women and children are not employed in vacations unsuited to their age or sex, and for maternity benefits for women in employment.