11th August speech should be a part of constitution; the resolution passed at Minority Day Conference: HRFP 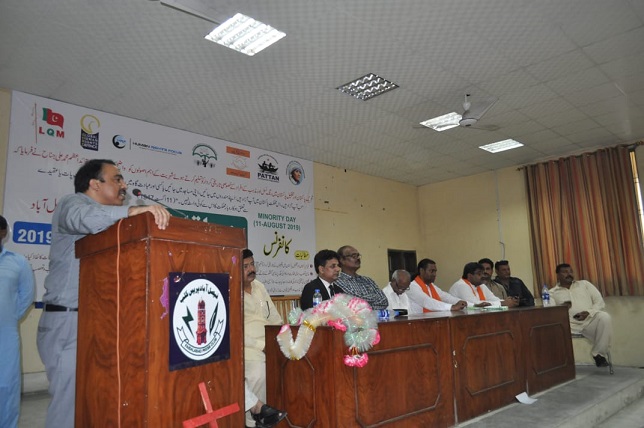 Faisalabad: August 11, 2019. (PCP) The minorities demand for equal status as Muhammad Ali Jinnah addressed at 1st constituent Assembly on 11th August 1947 and declared that in newly formed Pakistan the religion should be a personal matter of every citizen, the state will have no concern with any citizen’s faith or religion as the Jinnah explicitly spoke of giving equal rights and freedom to the religious minorities in his speech, states “You are free, you are free to go to your temples, you are free to go to your mosques or any other place of worship in this State of Pakistan. You may belong to any religion or cast or creed — that has nothing to do with the business of the State ... Now I think we should keep that in front of us as our ideal and you will find that in course of time Hindus would cease to be Hindus and Muslims would cease to be Muslims, not in the religious sense, because that is the personal faith of each individual, but in the political sense as citizens of the State” which should be a part of constitution, the resolution unanimously passed by speakers and audience including the sitting and opposition political parties representatives , around 1000 participants belonging to different key stakeholders and minorities; the resolution presented by Naveed Walter president Human Right Focus Pakistan (HRFP) at Minority Day Conference organized by HRFP with GHRD and NMAP, LQM and other civil society organizations at Press Club Faisalabad. Naveed Walter said the Minority Day is not only to highlight the contributions, services and sacrifices but to urge and remind authorities for their responsibilities also to ensure that every citizen must live in dignity and peace for which the government should be pledged to promote and protect the rights of minorities, he added.

The following core recommendations of Minority Day Conference 2019 are submitted to authorities;

1.            The recognition of minorities’ role in Pakistan movement and formation should be acknowledged and minorities should have equal rights as citizen.

2.            Religious discrimination, biased attitudes & behaviors and religious discussions at workplaces should be ended by means of law & legislations.

3.            The electoral system for minorities should be through direct elections as mentioned in constitution about true representation.

4.            The abductions, forced conversion & forced marriages of minority girls should be stopped immediately.

5.            To make sure the minorities’ equal status the government should start land reforms; the agrarian and domestic.

6.            The minorities must be permitted for their appointments in higher rank seats so the religious discrimination & hatred attitudes may decrease.

7.            The 5% quota in jobs for religious minorities should be implemented so the further economic murder of minorities could be minimized.