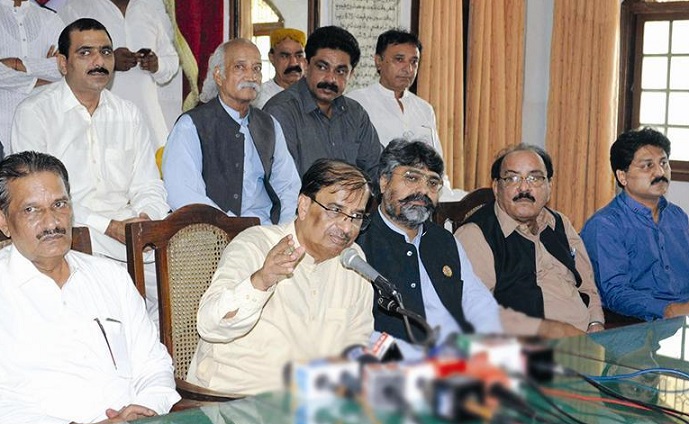 HYDERABAD: September 23, 2019. (By Abbas Kassar) Pakistan Muslim League-N would vehemently oppose any move from federal government to separate Karachi from Sindh or invoke section 149 on Sindh under any pretext or impose governor rule in the province. This was stated by Shah Muhammad Shah provincial president of PML-N while addressing news conference at press club here on Sunday.

He was accompanied by Senator Nihal Hashmi, Ali Akbar Junejo, Qamarzaman Rajper,Anwer Soomro, Tariq Chowdhry, Khialdas, Hanif Siddiqui, Arif Jamal Soharwardi and others. He said at present situation along eastern and western borders of Pakistan was critical and Pakistan was tangled with political and economic quagmire.

He said after long spells of martial laws in this country now selected prime minister has been brought to suppress political freedom. He said present selected government has made life of common citizen very difficult with increasing prices of consumer items on daily basis. Roti (bread sold at Rs.5) has jumped to Rs.15. Ghee, rice, cereals, medicines have all increased to out of reach of common man. He said they tried national coherent on Kashmir but prime minister was bent to arresting all leaders of political parties. He said every government department was running on WhatsApp.

He questioned as to what happened to video of NAB chairman in which he was seen kissing to a woman. How can such a man deliver justice.

He said Nawaz Sharif was not hostage prisoner. However, he said good days are to follow. He said Imran was saying everywhere he will not give NRO will he tell the nation who has asked him for NRO. He made it clear that ML has not asked for any kind of NRO and also no deal or dheel. To a question on JUI’s lockdown of Islamabad, he said Maulana was political partner of PML as such we are with him.

On alliance with PPP, Shah Muhammad Shah said though both parties were on on issue of rule of law and democracy but both have their own manifesto. He told media that N league was holding workers convention across Sindh. 4 conventions have been held in Karachi and that their convention in Hyderabad would be held on 29th September.