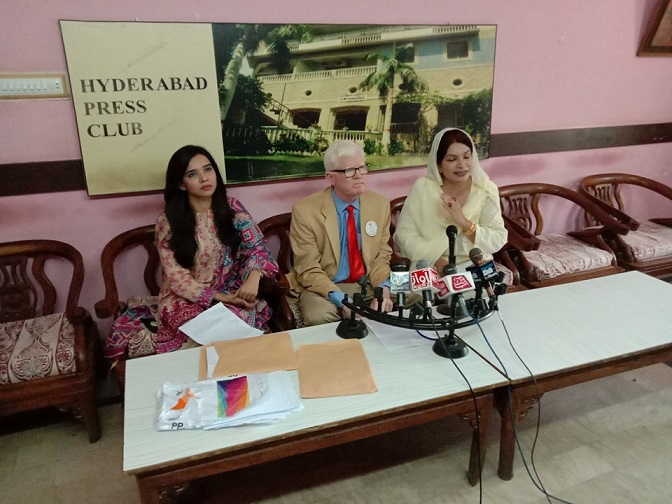 HYDERABAD: September 23, 2019. (By Abbas Kassar) Child rights activists from Initiator Human Development Foundation, Child Rights Movement and Society for Protection of Rights of Children have expressed grievances on ever increasing incidents of violations of children rights including sexual abuse. Addressing news conference at press club here on Saturday child rights activists Rana Asif Habib, Zahid Thebo, Anisha Waliullah and Marvi Awan told media that recently dead bodies of children were found in Qasur, children dying of dog bite on mass scale in Larkana as health department failed to provide vaccines of dog bites, in Mirpurkhas non provision of ambulance by government hospital for carrying dead body of a child caused death of child’s father and uncle while taking child’s body on bike are open violations of children rights in Pakistan. They told that in Sindh alone more than 6 million children were out of schools. They urged on child protection policy as without it their protection was not possible.

Quoting monthly magazine Sahil, they said 1016 incidents of sexual abuse of children were reported in Sindh. They said deputy commissioners had to form district coordination committees in 29 districts under Sindh Child Rights Authority Act 2011 but they have failed so far despite passage of 8 years. They said so far Independent Commission for Rights of Children has not been formed, they said and added that children were victims of malnutrition.

They said national nutrition survey was conducted in 2018 by government of Pakistan in collaboration of Agha Khan University, UK Aid and UNICEF according to which 45.5% children in Sindh were found under stunting, 41.3% were found underweight, growth wasting 23.3% and 5.2% as overweight. They said in Sindh Tharparkar district was on top with malnutrition where according to media reports from 400 to 500 children die every month of hunger and for want of medicines. They demanded from Sindh government to implement laws made for rights of children.

They also said that vigilance committees in 29 districts of the province have also not been formed and work on them should be expedited. On this occasion Zahid Thebo Regional formed which should be completed soon. He said they demand formation of independent commission on rights of children as also policy for protection of children and Plan of Action on provincial level as also child protection cells on district level in offices of SSPs where child protection officers be appointed. He also said that there was law against torture (body punishment) of children but alas, it was not being implemented.

The leaders of child rights demanded to include street children in survey, to expedite construction of buildings, shelter homes and rehabilitation centers for street children. They also demanded implementation on laws against child labour, body punishment, child marriages and sexual abuse.