The stability and prosperity of South Asia cannot be separated from the Kashmir issue: President Erdogan 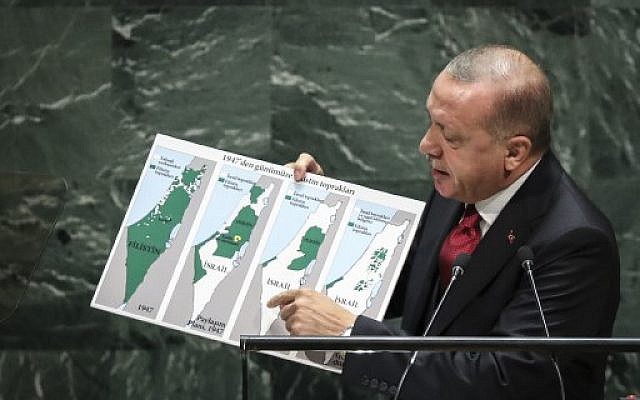 New York: September 24, 2019. (PCP) “The people of Kashmir were heartened by President Tayyip Erdogan’s intervention during the 74th session of the United Nations General Assembly when he said, “The stability and prosperity of South Asia cannot be separated from the Kashmir issue.” This is the most practical, viable and sensible statement put forth by the President of Turkey,” said Dr. Ghulam Nabi Fai, Secretary General, ‘World Kashmir Awareness Forum.’

President Erdogan reminded the world leaders "Despite the resolutions adopted by the United Nations Security Council, Kashmir is still besieged and 8 million people are still stuck in Kashmir," "They (Kashmiri people) cannot get out," of their houses.

Who will disagree with the vision of President Erdogan when he suggested to the world body? "In order for the Kashmiri people to look forward to a safe future with their Pakistani and Indian neighbours, it is imperative to solve this problem through dialogue on the basis of justice, and equality instead of conflict.”

Fai suggested that the world powers have two choices before them.  One is to continue confining themselves to warning both Pakistan and India against going to war with each other. This policy bases the no‑war prospect in South Asia on a very precarious foundation. The prospect of a nuclear exchange in that vast Subcontinent cannot be dismissed in the event of hostilities breaking out between the two countries.

The second option is to play a more activist, mediatory role in regard to Kashmir as suggested by President Erdogan. This can take the shape of a multilateral dialogue or an appropriate use of the newly‑developed procedures and mechanisms at the United Nations. The U.N. would supply the catalyst that is needed for a settlement. And UN should besides appointing a special envoy on Kashmir, a person of an international standing, like President Mary Robinson of Ireland; should persuade both India and Pakistan to initiate  a peace process with which all parties are involved – India, Pakistan, Kashmiri leadership and the United nations.