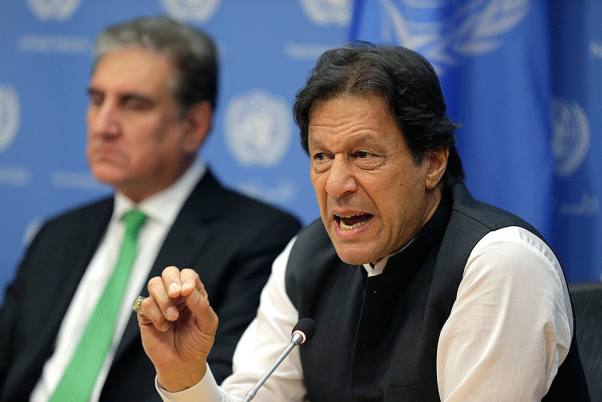 On Friday, September 27, 2019, Prime Minister of Pakistan, Imran Khan Niazi, wearing a navy blazer over a traditional shalwar kameez, addressed to the world leaders at United Nations General Assembly, New York. He attempted to explain the dangers of Islamophobia and why Muslims are sensitive to attack on the insult and ridicule of their Prophet Muhammad. He said that it was important to understand this. The Prophet Muhammad lives in their (Muslims) hearts. When he is ridiculed, when he is insulted, it hurts heart and heart pain is more severe than body pain. He also asked that if the word Christian terrorism is not used then why is the label of Islamic terrorism used?  He is considered as a moderate person and liberal Muslim political leader of Pakistan.

If you have truly concerned that your Prophet Muhammad not be ridiculed or insulted, then take the first step, to remove those blasphemous contents from the sacred texts of Islam-Quran and Hadith, which ridicule and insult your Prophet Muhammad; and take the second step to ban and to restrain the Muslims who are insulting and ridiculing other religions or faiths openly and publically. These are major reasons that Muslims world has formed blasphemy laws and they are struggling to use UN forum to get endorsed these blasphemy laws for their ulterior motives. For example, Muslims say all religions are false and now they have no right for them to be followed. For Christians, they say that Christian’s faiths such as Jesus is the Son of God and Crucifixion of Jesus Christ etc., are false and the Bible is a corrupted and changed book. They practice it without bothering that this is the religious attack on someone and it will hurt his feelings. They think whatever they will say about other religion or faith and do is the divine right for them. Hence they formed blasphemy laws to protect Islamic faiths and doctrines so that no one can dare to give references from their sacred text Quran and Hadith which are against theirs Islamic doctrines, these both sources are full of those instances which are against theirs Islamic doctrines.

You are feeling pain of Muslim Minority in Kashmir and India, let the minorities of their own country Pakistan live without pain, when you are crying for so called religious persecution in Kashmir and ignoring Uighurs in China, then there is something wrong at the bottom. On this behavior and attitude of you Muslims one can say you are hypocrites and play game for gain either political or religious.

We know that is the reason the Muslim world has formed and promulgated blasphemy laws and now they are using the term Islamophobia as a shield to attack people of other religion and faith and to save their own skin under this shield of Islamophobia. You have forgotten that Muslims of Pakistan say Christians are impure, Pakistani Media and government authorities are all same. Muslims are spreading hatred against Christians and other religious minorities openly and publicly and you are talking about Islamophobia in West.

Religion is an objective which has enlightened human beings in positive and constructive perspective. It is human nature that there are some persons that have a strong desire to criticize religion or its specific teachings and practices. The religious criticism of a man should be considered as a support for its followers or believers, because, it is the criticism by which the followers or believers get themselves familiar with those factors of religion which are unknown and untaught to its followers. There should not be destructive laws or blasphemy laws to be enacted to punish the critics of a religion in any country or nation. Religious critics must be welcomed and tolerated as it is being happened in politics, the politicians are being tolerated in spite of bitter disagreement. If there is a religion which is in need to protect itself and its sacred personalities by some restrictive and destructive laws-blasphemy laws, then we are right to say, there must be some basic aspects of that religion which are based on deceitful, Machiavellian and inharmonious norms.

Christians and other religious minorities are victims of Islamic hatred and Islamic blasphemy laws in Pakistan. Mr. Khan you don’t know the pain of victims, who are in jails, illiterate Nabeel Masih is in jail just liking a picture of a Islamic building, Nadeem Samson, is in jail falsely accused of running a facebook, Sawan Masih, just on drinking alcohol awarded death sentence under blasphemy law, is in jail, many Christians' homes burnt into ashes. A poor innocent illiterate Christian couple, Shama and Shahzad, was burnt alive just on hearsay accusations of burning pages of some Quranic verses, two Christian brothers Qaiser and Amoon Ayub were sentenced to death, are in jail, and many other are suffering in Pakistani jails, and you are using blasphemy laws and Islamophobia as a religion card for political gain even on the UN forum.And lastly after your speech at UNGA,New York , Ploy Clinic and Pimse Hospital in Islamabad refused to keep the dead body of Christian woman in their Morgue Room.

The first thing the world must remember that the majority of the Persecuted Christians are the creation of the Islamic Countries and some are from other non-Christian majority nations. Pakistan is the one of those Islamic countries where every crime against humanity is being committed either by State actors or non-state actors, which is defined by the International Criminal Court. The second the most important thing is that Christians are being persecuted solely due to their Christians faith. They are not violent or trouble makers; and the sacred and revealed text, which they read and recite, is not the cause of the creation of violence and terror in any part of the world, wherever they are in minority or in majority. They just want to live in peace because they are peace and love promoters. They never say we will fight against those who are persecuting us. They never say they will take up arms against Government which is against Christianity and its faith. They bear and pray for all human beings because they know that they are only hope for peace and love for humanity.