Indian Church demolished by local council within month of opening 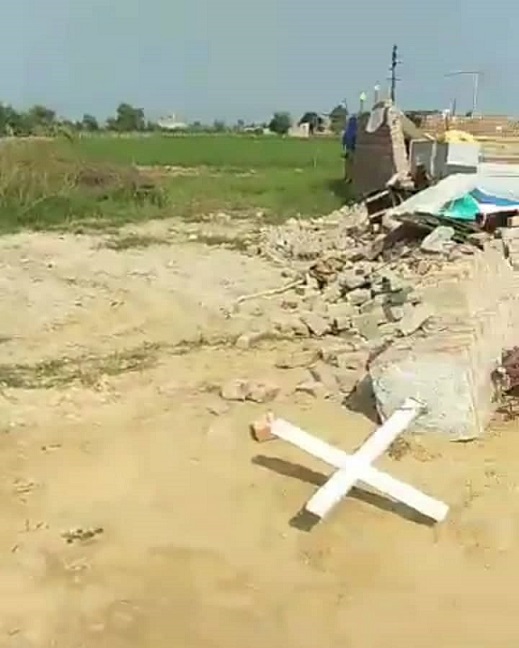 Haryana, India: October 11, 2019. (PCP) In an act of bureaucratic vandalism, a newly built church was demolished after just over a month of use. The local authority ordered the destruction due to a lack of planning permission despite the entire community having been built without any.

Pastor Newton Das began the purchase of a 600sq yard plot of land for a church in Sirsa, Haryana, in December 2017. After completing payments for the land amounting to 9 Lakh rupees (£10,300) in August 2018, Pastor Newton began to develop the land. To save costs he hired local contractors at 3 Lakh rupees (£3,440) and drew on substantial help through congregational members who volunteered, eager to begin worship in a designated church building.

The new church building became usable in August 2019 after the basic infrastructure including a main hall and washroom facility where built. Over 200 believers attended 'Church of Jesus Anointing' at its launch on 7th August and new visitors began to attend the church. However, by the second week the church received a letter from the local municipal authority asking them to cease any use of the building because the appropriate planning permission had not been applied for.

Unsure that the letter was genuine especially as the church had only just begun services, Pastor Newton contacted local neighbours to get a better understanding of the contents. Local Hindu neighbours all said they had received a similar letter form the council, but no further action was taken or expected. On hearing this Pastor Newton decided not to do anything about the letter.

A week later a further letter than arrived and Pastor Newton decided to obtain a solicitor. The latest letter did not express that any physical action would be taken by the local council so there was no rush to get things in place with a legal counsel. Only days later 31st August 2019 however Pastor Newton was shocked to the core when he was advised that a force of police, military officers and Municipal officials had turned up at the partly constructed church and were demolishing the building. Though this was deeply upsetting especially as it had taken so long to pay for the land and to build the church Pastor Newton stayed away from the demolition after being warned by church members that the agents involved in the demolition were being very aggressive.

A JCB vehicle was brought to the church and was used to demolish the church boundary wall and building. The main hall and washroom facility were flattened, and a water cooler and the church sound system were broken beyond repair.

The demolition has shocked Pastor Newton and other members as it flies in the face of previous municipal warnings. There are many other unplanned buildings in the town where planning permission is scarcely applied for. Moreover, in the surrounding area there are many other larger buildings including houses and temples that were already constructed without planning permission close by - none of them have been demolished.

When Pastor Newton spoke with BACA, he said: “The saddest thing was that the Committee only demolished the church whereas all other houses and temples built there in the same colony are still there.

All Church People are feeling a great sense of great sorrow and loss our investment has been destroyed.

It was a great loss of funds which were raised, our hours volunteering have been laid waste - with great pain and sacrifice we built a place for people to worship - Now we feel so helpless”

Undeterred the 200 strong congregation still gather on the land to worship under a tent every Sunday.

Pastor Newton gathered together a large number of local Pastors and jointly submitted a memorandum to the Assistant Deputy Commissioner (ADC) at Harayna Development Authorities, seeking clarity on the lawfulness of the demolition. So far he has received no response.

Juliet Chowdhry, said: "Demolition of Church of Jesus Anointing so expediently reeks of intolerance, especially as other unplanned buildings have been permitted to remain intact.

It is heart warming to see that despite the setback the church members have continued services in a church and that they have not let the exhibited hatred to shake their confidence or love for God."