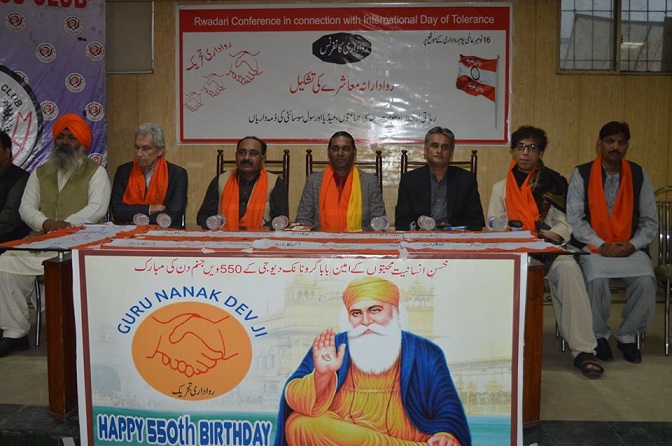 Lahore: November 18, 2019. (PCP) Rwadari Tehreek held a Rwadari Conference at Lahore Press Club on 16 November in connection with International Day of Tolerance and gathered people from different faiths, religions, cultures and languages to display the importance of tolerance and respect of diversity in a diverse society like Pakistan.  The 550th Birthday of Baba Guru Nanak, the founder of Sikhism was also celebrated at this occasion.

Rwadari Tehreek is a social movement working across the country for the promotion of pluralism and interfaith harmony to counter the prevailing culture of intolerance, extremism and violence observes International Day of Tolerance every year to highlight the negative effects of intolerance and to introduce ways and means which can help strengthening tolerant and pluralistic society.

The speakers further observed that the National Action Plan which was made after the APS tragedy has not been effectively and fully implemented which has plunged Pakistan into a more difficult situation at home and internationally.

In his inaugural speech Chairman Rwadari Tehreek Mr. Samson Salamat said “International Day of Tolerance is a very special day and should be observed in every corner of the country because Pakistan badly needs to indoctrinate the culture of Tolerance which means respect, acceptance and appreciation of the rich diversity of our society”.

“However, the promotion of the culture of tolerance is not possible in our society unless and until all responsible quarters make it as a national narrative and take decisive measures and steps to weed out intolerance, discriminations and biases” Mr. Samson Salamat added.

In order to make Pakistan a tolerant society, Rwadari Tehreek tabled following recommendations at the Conference:

The speech of the Founder of Pakistan of 11th August 1947 to the Constituent Assembly should be made part of the Preamble of the Constitution of Pakistan and should also be included in the curriculum of the educational institutions. The Quaid-i-Azam Muhammad Ali Jinnah during his first address to the Constituent Assembly of Pakistan said “We are all citizens and equal citizens of one state….Now I think we should keep that in front of us as our ideal, and you will find that in course of time Hindus would cease to be Hindus and Muslims would cease to be Muslims, not in the religious sense, because that is the personal faith of each individual, but in the political sense as citizens of the State.”

An effective National De-radicalization Plan should be made which should include the ban on hate speech, elimination of biased material from the curriculum, ban and action against all extremist terrorist outfits, their financiers, facilitators and supporters and de-weaponization policy to stop Gun and Bomb Culture.

The laws including Blasphemy Laws which are being misused to instigate violence should be reviewed and reformed to control chaos, and destruction of the lives and properties of the citizens, especially of those belonging to religious minorities. 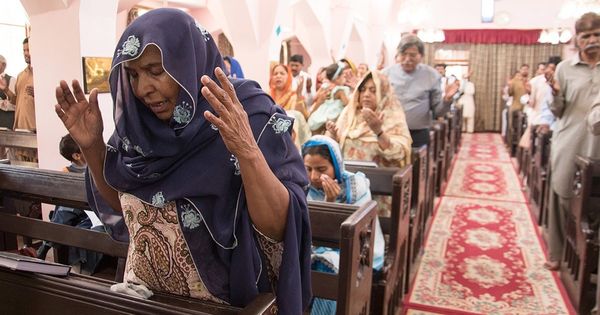 Sialkot: (By Kashif Nawab) The incident took place at Kang Chelokay village which was established before partition of Pakistan that consist about 4