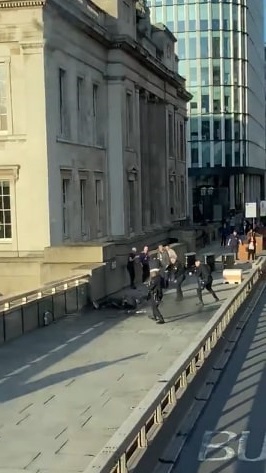 London: November 29, 2019. (PCP) A suspected terrorist attack was thwarted by London's Met Police after a knife rampager was first grappled to the ground by local citizens and then shot dead by armed officers.

One man who is featured in several photos taken by witnesses even managed to grab the knife from the assailant but not before the enraged individual had injured six people three of whom are in a critical condition.

One other man has been detained by the police. The London Police reports that knife attacker name is Usman Khan who is 28 years old. He was already arrested on terror charges but released from jail early with tracker on his knee.

Witnesses are reported to have seen a man with two large knifes being grappled by several other local people one armed with a big stick and one with a fire extinguisher.

"What has been remarkable about this incident is the quick response by local citizens. Their vigilante action no doubt saved many lives, coupled with a very clinical police operation.

"London has become a city of heroes and this sends out a strong message to would-be-terrorists that our city is no longer an easy target.

"We pray for those who have been injured and their close friends and relatives, hoping that any injury is short term and that healing allows for a complete restoration - may God give them succor.

"We praise the efforts of our emergency services whose impeccable work ensures minimal impact from the savagery of a malicious and very tiny minority.

"Though it may have put them in danger and we would hate for anyone to get hurt, we thank the brave individuals who stood up to the terrorists and brought the pernicious carnage to an end."