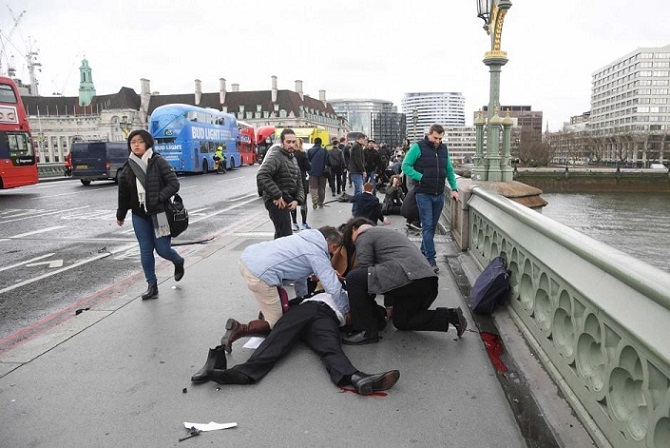 BUDAPEST/LONDON/THE HAGUE: November 30, 2019.  (BosNewsLife) Europe has been rocked by two attacks, one in Britain and one in The Netherlands, amid concerns that Islamists may increase attacks ahead of Christmas. In Britain, police released details about a young man who killed two people in a stabbing spree on London Bridge before Police shot him dead. In The Netherlands, the police are still searching for a suspect, similarly injuring three teenagers.

British police were seen shooting to death a man at London Bridge. They say he stabbed several people. Bystanders had wrestled him to the ground.

The man was identified as Usman Khan, a 28-year-old British man whose family is from Pakistan-controlled Kashmir.

Wearing a fake suicide vest and wielding knives, he went on the rampage on Friday afternoon.

Police said two people – a man and a woman – were killed in the attack. It happened days before London is due to host leaders of the NATO military alliance, including U.S. President Donald Trump. A man and two women were injured and reportedly remained in hospital.

Khan had experience with terrorism. He was convicted in 2012 for his part in an al-Qaeda-group inspired plot to blow up the London Stock Exchange. The man was released in December 2018, subject to conditions.

Prime Minister Boris Johnson, who faces a snap election on December 12, expressed his shock about the attack. “My thanks go first of all to the emergency services and the Police for their bravery and their professionalism,” he said.

He said it was a terrorist attack. And he vowed to end a practice whereby serious offenders can be automatically let out of prison early, as the opposition attacked the policy.

Friday’s attack came less than two weeks before elections that could decide Britain’s fate in the European Union. During the 2017 election campaign, London Bridge was also the scene of violence. Then three militants drove a van into pedestrians and then attacked people in the surrounding area, killing eight people and injuring at least 48.

But London wasn’t the only area where a terror-related attack occurred Black Friday.

Soon after, people ran away in panic in the center of the Dutch city of The Hague.

A suspect stabbed several people at the Hudson’s Bay department store in the city’s buzzing Grote Marktstraat shopping area. The three victims of that attack were said to be two girls aged 15 and a boy of 13.

None of the victims knew each other, and police are still hunting a male suspect, with no clue as yet to a motive, officials said.

Citizens are worried. “Horrible things are happening increasingly closer to us,” explains young who says he works nearby. “That creates fear. It is hard to work here at the same location where the attacks occurred.”

The attacks have underscored concerns in Europe about a possible increase in terror-related incidents this holiday season.