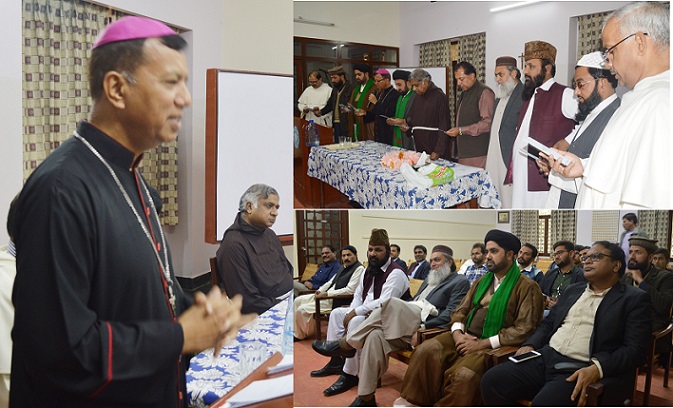 Fr Dr Jamshed Albert OP, diocesan Director welcomed the guests and introduced the purpose of the program. In the beginning Fr Raphael Mehanga OP said prayer for the unity among religions and peace and harmony in the country.

On this occasion Professor Abdul Majid Watto said that to be different is part of the universe. We people of different religions are like a bouquet of flowers and like Planets who must bear the furit. This diversity adds colors in the beauty of the universe. Parts of our body eyes, nose, ear etc play different roles but are the part of one body.

This difference makes the life beautiful. A similar difference in sects and religions adds colors for the service of humanity. He said that the participants of the seminar are not ordinary people they are special because each one of them leads thousands of people behind them. So, if they work for peace and unity thousands of people will become agents of peace.

Mr Ayub Sajid from his daily life experiences said that there are many incidents in his life when he felt the kindness from Muslim community.

Allama Saeed Mahmood said that we do not let anyone erect wall of hatred. We do protest against Blasphemy issues but we always protect peace and harmony by protecting minority. He said that Christian leaders should become voice against blasphemous activities. Fr Dr Jamshed Albert OP referring to Nostra aetate, the Declaration on the Relation of the Church with Non-Christian Religions of the Second Vatican Council said that our religion teaches us to give respect to the all religions especially to Islam who also believe in one God. He further said that we condemned immoral sketches made to profane the Islamic Prophet Muhammad and the first press conference of condemnation was led by Archbishop Sebastian Francis Shaw at recent incident of attempting of burning of Quran in Kristiansand, Norway.  Jesus says love your neighbor and love even your enemies. The one who do sacrilegious acts cannot be follower of Christ because the message of Jesus is peace and love.

Mujahid Abas, a muslim Scholar of Shia community gave the example of Karbala from the history of Islam when Christian people protected Muslim women and from dishonor at the time of Yazid. So, they cannot forget that historical fact and they always give respect to Christians. He said that we should always be ready to go together for common purpose. He said that people who are present here belong to different religion and different sects but their teachings are common in many ways.

He gave the example of Caliph Ali that he was accompanying a non-Muslim. At a certain place their destination diverted but Ali continued with Non-Muslim. The Non-Muslim asked that your destination is different than why are you continuing with me. Ali answered that it better to go a few steps further before we are separated.

Mr Patrick Sarfraz cherished Misaq e Madina (Charter of Madina). He said that this document/constitution speaks for the harmony and protection of the minorities and agreement with Muslim and non-Muslim.

•    Determining the rights and responsibilities of the local population

as well as the immigrants from Makkah

•    Making agreements with the non-Muslim population of Madinah,

especially the Jews, to ensure peace and harmony

•    Creating a strategy and plan to defend the city against invasions

•    Making resources available for the immigrants to make a living

Peer Anwar Sidaq started his talk with the poetry which expressed that we worship one God and we do not need separation of people. He said that there are thousands of religions and none of them disgrace or disrespect humans. He also ended with the famous poetry of Bulle Shah Masij Dha de Mandir dha de, dha de jo kuj dhenda Ek bande da dil na dhawin, Rab dilan che rehndaHe says that human beings are more respectful than religious places. Because God’s real presence is in the heart of human beings.

Fr Nadeem Francis OFM Cap said that we raise our voice for the rights of justice and equality. We stand for the Justice for the Christian community and as well as for the Muslim people who are deprived of their rights and unjustly targeted. Along with Archbishop Sebastian Francis Shaw we work for the promotion of peace. In Lahore we Muslims and Christian work together for peace.

Amir Shahzad Sadiqi (Author, poet, speaker) described the story of Christian women who presented her son for martyrdom at the time of Karbala. Christian at that time strengthened them and gave them courage by protecting them. Those who burn Quran or do blasphemy are by chance born in Christian family. They are ignorant. There is no religion of shadow and sunshine because they are not trustworthy. No religion encourages profaning the names of prophets or saintly people in any religion. Our families have vital role to play especially our mother. He quoted the words of Prophet that nature of person doesn’t change till the seventh generation.

Archbishop Sebastian Francis Shaw, Chairman National Commission for Inter-religious Dialogue and Ecumenism, started his talk by explaining the experience of his adolescence and youth when he was in Sanghar Sindh. He said that he had very rich experience of good relationship with his Muslim friends. They used to visit each other families and use to share food available in each other families. He said that before 1980s there was peace in country but after 1980s prejudice and extremism inflamed. He was of the opinion that media and news spread prejudices when they present the news making it religious or sect’s issue that four Christian Died or four Shias were killed. He said that instead they should say that the four Pakistani killed what will be the future of their families?

Jesus says blessed are the peace-makers. He also quoted that in Quran it is said the murder of one man is murder of whole humanity. He said that Muslims are closer to Christians than Jews because they believe in Jesus our savior. This is no more time to humiliate or fight against each other religion. This is time to be united and to face the challenges of prevailing atheism. In Europe there are 43 percent atheists according to the survey held in the last decade. One of the challenges Muslims and Christians are facing is split of family nuclear and traditional natural family. Homosexual marriages are examples of such challenges. On 4th February Pope Francis and Shaik Sheikh Mohamed bin Zayed, Crown Prince of Abu Dhabi and Deputy Supreme Commander of the UAE Armed Forces, met in Abu Dhabi and prayed for the universal brotherhood and peace.

At the end Archbishop also admired the struggles of Pastoral Institute Multan who played a great role for the promotion of peace and interfaith dialogue bore the fruit that no extremist activity has affected the peace in Multan. Multan is called the city of saints and always there is peace in the land and he prayed that in future also this peace may continue to prevail. At the end of seminar, the peace prayer of St. Francis Assisi was recited together.