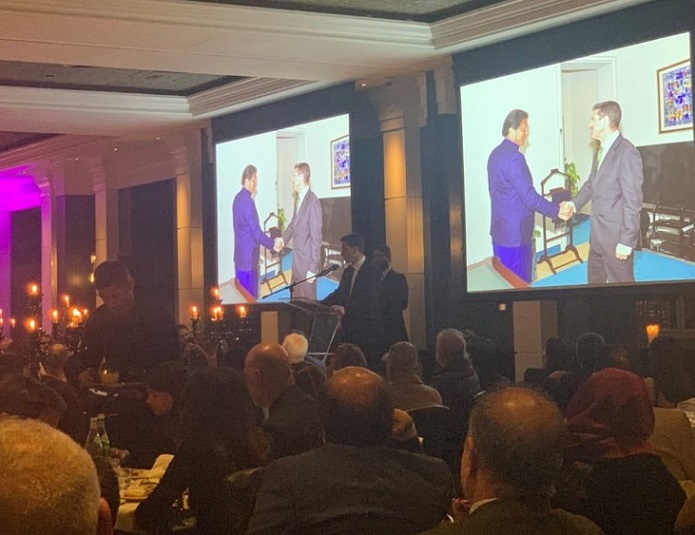 Islamabad: British High Commissioner to Pakistan, Dr Christian Turner CMG, has set out his ambition to double UK-Pakistan trade during a two-day programme in the North of England.

Speaking at a business event in Manchester, he called on business leaders to build on their deep UK-Pakistan ties and the changing perceptions of Pakistan. He set out how positive British government policies had the potential to help unleash Pakistan’s growth through tapping potential, and expanding existing partnerships.

Dr Turner said: “I want the business community to be part of unleashing the full, enormous potential of the UK-Pakistan relationship; my ambition is to double the trade between our two countries. The community ties in the northwest of England exemplify our unique partnership and we want to challenge perceptions of Pakistan - it’s a country modernising fast and changing for the better.”

During the visit, which also covered Leeds and Bradford, the High Commissioner flagged that UK Export Finance, the UK’s expiry credit agency, had a £1bn facility of which only £3m was currently being utilised.  He also planned to double the size of the British High Commission trade team and further support economic development and technical expertise in Pakistan.

I want to start by thanking our host Mr Aneel Musarrat. Aneel you and I have met last summer and I have seen the enormous energy you bring in what you do. Your stories tell the tales of a remarkable journey, and hard work. That,combined with your humility, and your hospitality, has touched us all here. Thank you very much.

Talking of Aneel and his team, I feel a great energy coming here as a diplomat to tell you about what I want to talk about. I want to tell you a story about three individuals -  a gardener, an architect and a diplomat  - who are arguing about who has the oldest profession.

I want to tell you about three Ps: partnerships, perceptions and potential. We have already heard a lot about these from our speakers.

I have been acutely aware of partnerships in my first three months as High Commissioner. Almost every conversation I have had involves meeting someone, or talking to someone, who represents the really deep ties between our two countries. The 1.5m million diaspora community of course is at the heart of that, and we think will rise to about 3% of the British population in the next couple of years.

Tonight's room is a wonderful example of that. From politics to business, medicine, arts and culture – it’s a wonderful privilege for me to meet so many of . The figure I have is probably slightly old, but it says that 130,000 of British Pakistanis are in Greater Manchester alone, with families originating from different parts of Pakistan. There are nine direct flights from Pakistan to Manchester  every week. And there are 25 direct flights from the UK to Pakistan every week. Its a fantastic sense of old ties.

Old Trafford is home to many great England and Pakistan cricket classics. The next will be a Test match here on the 7th of August. This will be very difficult for me, because I have to be undiplomatic on which side I will be supporting. I will wear a green tie.

My notes here say that I’m told Manchester has the best Pakistani food outside of Pakistan! My point is that you all are the living bridge that binds our two nations together. And you all deserve a tribute for the rich contribution that you and the generations before you have helped make Manchester a modern, thriving, successful and a diverse British city.

We now have about 400,000 Brits who are travelling to Pakistan, 10,000 students from Pakistan to the UK. What has really struck me as the high commissioner is the breadth of the relationship. My mission is the largest British mission in the world, and that is because of the breadth of our relationship.

I have a responsibility for fourteen government departments. And that has been apparent to me this week as I have spent two days in Bradford and Leeds understanding this end of the relationship. I have met businessmen, MPs, counsellors, students, city leaders and local communities.  And I heard a core theme of sacrifice, hard work, enterprise and potential. And, frankly, I am humbled by the stories I have heard of generations who have worked incredibly hard to make the UK their home, working allhours to ensure their children would get education and have the opportunities to thrive and be successful. It’s an extraordinary achievement of real sacrifice and loss of life.

We have seen the return of the British Airways,  and the visit of the Duke and Duchess of Cambridge which showcased the relationship and beauty of Pakistan at a global stage. In my first month as a High Commissioner I recommended a first significant change in the travel advice to Pakistan since 2015, to allow more Brits to visit Pakistan and see what then country has to offer.

I hope this will help change the outdated perceptions. Those perceptions are based on elements of Islamophobia.I commend the work of Imran Khan and his team and the PTI for doing a fantastic job promoting tourism. I will give an honest advice that this country is open for people to visit.

Cricket is at the heart of our ties and I have had the opportunity to face a few balls from Kumar Sangakkara,who was on a visit to Pakistan as part of the Marylebone Cricket Club visit (MCC). The Pakistan Super League is going on at the moment and the atmosphere is extraordinary around the country. We have 15 British players in the league.

So all of this is a part of the perception story that we need to change and bring it much closer to the reality of modern and vibrant Pakistan.

And that brings me to the third P, which is potential. There is no doubt that the economy is key to Pakistan's future. With four hundred million people by 2050, the UK must support Pakistan's self-financing way out of poverty, delivering jobs for 60% of the population that are under 30 years of age. The economy is the number one story in Pakistan today and 2020 will likely be a year of stabilisation and growth while the country works through the program of structural reforms with the IMF. The reforms are painful but necessary. I know that Imran Khan and the PTI government are focused on delivering these despite political pressures and issues like inflation and food crisis.

And I think we all need to get behind and support their economic growth agenda. The good news is that the UK is one of  Pakistan's top three trade partners. We are biggest trading partner in Europe and are only behind the US and China. We have major investors like Standard Chartered,GSK, UBL and Shell.

There are two statistics which I am very fond of are. Did you know that there are more Shell petrol stations in Pakistan than there are in the UK? And which country do you think is the second largest manufacturer of the bagpipes in the world? Its Pakistan. But despite these positive stories if you look at the figures the actual numbers are still too low.

But looking at  trade figures, actual numbers are still low. Only £3.3bn in total, with only £1.3bn coming from the UK. Only 135 UK companies operating in Pakistan now.For context, in the UAE there are 5,000 British companies operating. It’s  almost as if there is an invisibility cloak when you have a city like Karachi - a large city with 25 million people who speak English an hour from Dubai and close to Karachi and Islamabad. And yet those firms are not going and investing and looking for opportunities in Pakistan.

I have three things I’m committed to as part of government’s efforts and my team’s efforts to change the story.

1.       Support for Pakistan’s economic growth.  DFID has traditionally invested in girls’ education,  and in health, but now they are increasingly working on economic development, inclusion. Pakistan’s rise by 28 points in international ‘doing business’ rankings and improved moody ratings tell the story that Pakistan is on the right trajectory.

2.      The second is the new country vision for the Department of Trade for Pakistan. We want to double the size of our team in 2020 with a renewed focus on key sectors. The areas include climate change with COP26 coming in, clean energy, tourism, finance, skills and education, close links between higher education institutions. I would welcome your views on which sectors we should stack our chips on. Andy Burnham, the Mayor of Manchester also asked me to confirm publicly that he will be bringing a trade delegation from Manchester in the first quarter of next year. There has been a shift as 5 years ago the focus of the High Commission was on security. Now want to focus on economic inclusion agenda. Pakistan won’t realise it’s true potential until all citizens are involved. International Women’s day on Sunday is especially important for the women in Pakistan. DFID’s work on girls’ education is especially key part of this agenda.

3.     The third area is UK public sector finance acting as springboard for private sector investment. UKEF - as our export credit agency is there to make sure that no viable UK business entity fails for lack of funding and insurance and it has incredible attractive terms for export. Its facility for Pakistan has recently increased to £1 billion, but only £3 million is being utilised. It’s a huge opportunity alongside CDC -  which is the investment branch of DFID  - as a development financer which is doubling its investment to half a million by the next 18 to 24 months.

My core message is simple - I want all of you to help Pakistan fulfil its full potential. My ambition is that at the very least I want to double the trade between the countries during my tenure as the High Commissioner. I also want you to encourage other to help us.

One set of issues my team is looking at is regional trade to generate growth, which we won’t have without regional stability. Pakistan’s leadership gave fantastic support to the peace deal between US and Taliban to bring the peace to Afghanistan which we are focussed on. We also share concerns on the tensions between India and Pakistan on the Eastern border given the Kashmir dispute. We want de-escalation and dialogue for this dispute.

So in conclusion, my challenge to you all is that we must up our game to build on the partnership to unleash the potential.

If we can’t make a success of Great Britain as we leave the EU in a relationship like this, where can we? Whether it’s this generation or the next, I know that the UK and Pakistan will continue to exemplify the very best in international partnership.