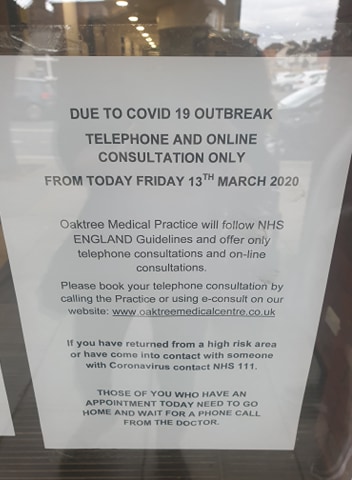 London:  Ilford GP practice had queues of people outside the premises alarmed at their sudden closure this morning (13th March). Oaktree Mediacl centre in Green Lane, Seven Kings seems to be the first Ilford practice to prohibit consultations in person within the borough.

A note on the door says:

"DUE TO COVID 19 OUTBREAK

TELEPHONE AND ONLINE CONSULTATION ONLY

The unannounced closure has left patrons upset and anxious as they try to obtain necessary treatments. The step seems to be beyond the guidance of NHS England and BACA is seeking clarification.

Sadly for many this closure has resulted in very sever consequences. Juliet Chowdhry a Trustee of BACA was visiting the doctors surgery to obtain a prescription for her brother who is critically ill and requires controlled drugs.

By shouting through a door a staff member from the practice was able to advise Juliet to post a note withe the name, date of birth and names of the required prescription drugs into their adjacent letterbox. Juliet was advised that a prescription applied for in this fashion would be made available in no sooner than 48 hours.

The situation is heightening the risks to Haroon Yousaf who is already having to self isolate for fears that an infection could be fatal. Worse still, as he can only obtain 2 weeks prescriptions for his controlled medicines he is fearing when they are most needed they may not be available,.

Despite pain in her right arm from a healing fracture, Juliet posts a note quickly scribbled on some rough paper found in her vehicle, seeking a prescription for her agonising brother.

A frightened Juliet Chowdhry, said: "My brother will suffer in sever pain until the prescription is made available this is very disconcerting.

"By this time we get the prescription we do not know if Chemists will be open or whether these medicines will be available.

"Moreover, I believe this action by Oaktree Medical Centre is unwarranted - I believe NHS England have stated GP practices must remain open till an infection occurs - doctors taking action like this is disturbing to say the least.

"If it was not for my persistent knocking I would not even have been able to get this route to a prescription, initially staff just ignored the many bewildered people outside their doors, seeking desperate medical attention."

Local resident Keith Clayton who was in the queue, said he was 'really disgusted' at the lack of notification. He said: "I'm shocked, normally patients are updated by email or text."

He had taken time of work after to get to the GP practice as he requires special treatment following an operation on 10th February requiring partial bowel removal. He now has a stoma bag and requires special medication but for now unsure of what to do next. BACA believes other clinics are open and advised him to try elsewhere but this could take him up to four hours or more to be seen today.

Juliet Chowdhry called NHS England's 111 service (as advised) to seek the immediate hospitalisation of her brother, but was unable to get through after an hour long wait on the telephone. BACA is trying to confirm with NHS England whether all GP practices are due to shut and switch to telephone and online consultation only.