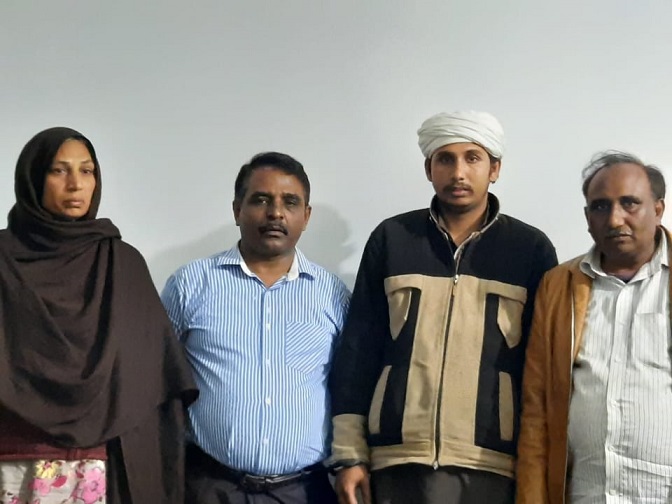 Lahore: (By Napoleon Qayyum) Warris Masih who is the resident of Gulshan-e-Noor SharifPura Cantt Lahore and is the father of 7 (2 Died). One of her daughters named Anita, on February 14, 2020, at about 8:00 am on Friday went to a nearby shop to buy some grocery items but a boy of neighborhood Nasir deceived her for fornication and kidnapped her. This boy has tried the same before and has created a lot of problems upon guiding. Anita is totally immature and is only 16 years old and used to work with her mother in some houses for cleaning.

Warris told PCLJ that as soon as they came to know this, they started finding Anita and they called at 15 (Local Police Station number) in between 8:45 to 9:15, but even upon calling police kept on delaying them and didn't give them and their issue any importance. Upon continuous trying police arrived after about half an hour. When Police officers arrived, their attitude was totally irrelevant and they didn't bother anything and made a formality visit. After this Warris Masih also went to Police Station Manawa at about 12 pm. When police station. Police gave the copy of F.I.R (First Investigation Report) to Warris Masih the nest day upon continuous insisting.

Waqas, the elder brother of Anita continuously requested Mian Tanveer(Investigation Officer) of the case to raid Nasir's House so that they can get Anita back but as police were ignoring the Victim's family they did the same this time also.

On 19th February 2020 Police again raided and arrested two of Nasir's brothers named Qaisar and Yasir, husband of Nasir's sister and a guest that was present at their home. In between all this Imran Jutt a rich person of the local area called Mian Tanveer and said that the girl will be handed over to you after 2 days so release all those men whom you have arrested. So, the police did the same.

Waqas and Warris Masih were continuously calling the police but still, the attitude of police was totally biased towards Nasir and every time Waqas called Mian Tanveer, Mian Tanveer said that I am busy and yet I am in the High Court and will call you later. Tanveer repeated this several times. But on 21st February 2020, Mian Tanveer called Anita Family and showed them the Muslim Marriage certificate of Anita and Nasir Ali and said that I was in the High Court when someone handed all these documents to me. After this Mian Tanveer outshot the F.I.R and stated that never turn your face here again and I can do nothing for you.

Due to the cancelling of F.I.R the appeal of Warris Masih family in the Session Court has also been cancelled and Tanveer said that he has outshot the F.I.R under the section of 164.

The attitude of Police even at this time with Warris Masih and his family is very bad just because they are Christians so they are facing all these circumstances at the present. The F.I.R has been cancelled along with their appeal in the Session Court and the Muslims are harassing them continuously.

Now, at the present Warris and his entire family are very upset especially Warris that on 16th March 2020 He was going somewhere on the bike and thinking about his daughter Anita he fell so hard on the ground and due to this his shoulder was very badly injured.

Further Warris Masih told PCLJ that police is totally biased towards Nasir and police have a report of quashing F.I.R to court saying that case is false and frivolous. After submission of the report, the court quashed F.I.R. Parents of the abductee requested PCLJ to knock the doors of court for production of their daughter. PCLJ's legal team will submit a writ in High court for production of their daughter.